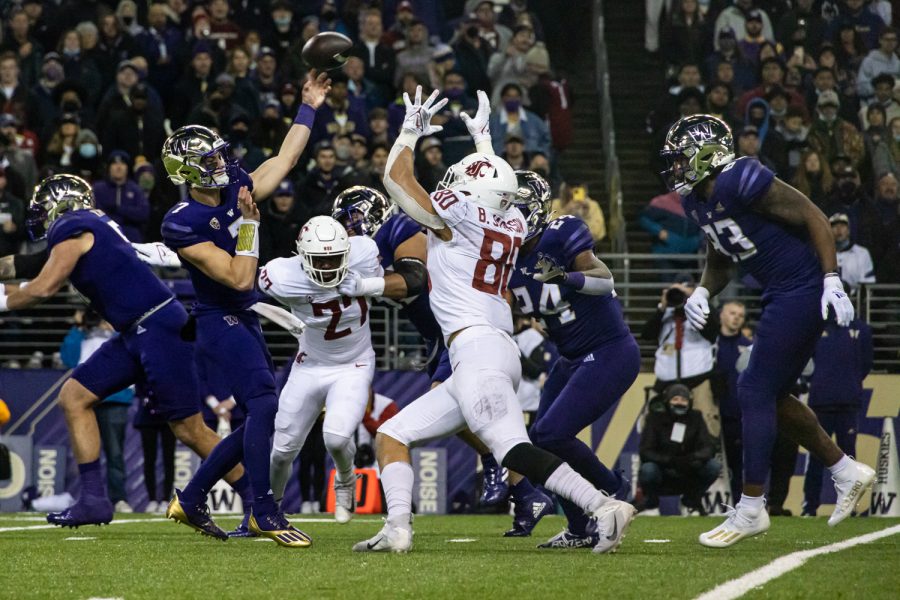 Football returns to the Palouse for WSU’s annual spring game at 3 p.m. on Saturday in Martin Stadium.

The game will be used as an evaluation to officially assign starting positions. The biggest position on defense that is up for grabs is free safety.

Head coach Jake Dickert addressed the role as “one of the biggest jobs on defense that we’re looking to find.”

This will be the first spring game under Dickert. He succeeded in guiding WSU to the 2021 Sun Bowl last December, just three months after becoming interim head coach.

Throughout spring camp, freshman Adrian Shepherd has been a front runner for the free safety position. Despite only making one appearance last season in the blowout against Arizona, the 5-foot-11-inch, 190-pound Texas native made progress in his understanding of formations, which is helping his stock rise for the role.

“We took him for a reason in 2020, he just has that football mentality,” Dickert said. “Every once in a while, you’ll see that aggressiveness get out of control. I’d rather pull him back than have to say ‘giddy-up.’ He wants to go take your soul when he tackles, and there’s times where he’s got to have finesse in the middle of the field and get people down.”

On offense, the Cougars are reloading with the talents of slot receivers Renard Bell and Lincoln Victor, and outside receivers De’Zhaun Stribling and Donovan Ollie.

Having lost both running backs, Max Borghi and Deon McIntosh, the position of running back has been day to day. Junior Nakia Watson is the front runner to start at running back as he plans on making a statement in the upcoming spring game.

“That’ll be a position we’ll be sorting out all the way to game day,” Dickert said.

The position has loaded talents with names such as redshirt freshmen Dylan Paine and Kannon Katzer, and true freshman Djouvensky Schlenbaker. Sophomore Jouvensly Bazil plans on making a return after recovering from an unspecified injury that made him unable to play last season.

Brennan Jackson and Ron Stone Jr. are likely to be the two starting defensive edges. Two defensive tackles that have been making an impression during practices are Virginia transfer Nusi Malani and sophomore Ty Garay-Harris.

“[Malani] has added a pass-rush element that was desperately needed from the inside,” Dickert said.

The team recently had the first scrimmage of the spring, achieving success on both the offensive and defensive ends. On the defensive end, there were impressive performances from defensive back Jordan Lee, linebacker Micah Lopez and edge rusher Raam Stevenson Jr.

On the offensive side, quarterback Cameron Ward connected with Ollie, Bell, Victor and Stribling to move downfield.

The spring game is set to kick off at 3 p.m. on Saturday and will be broadcast on the Pac-12 Network.