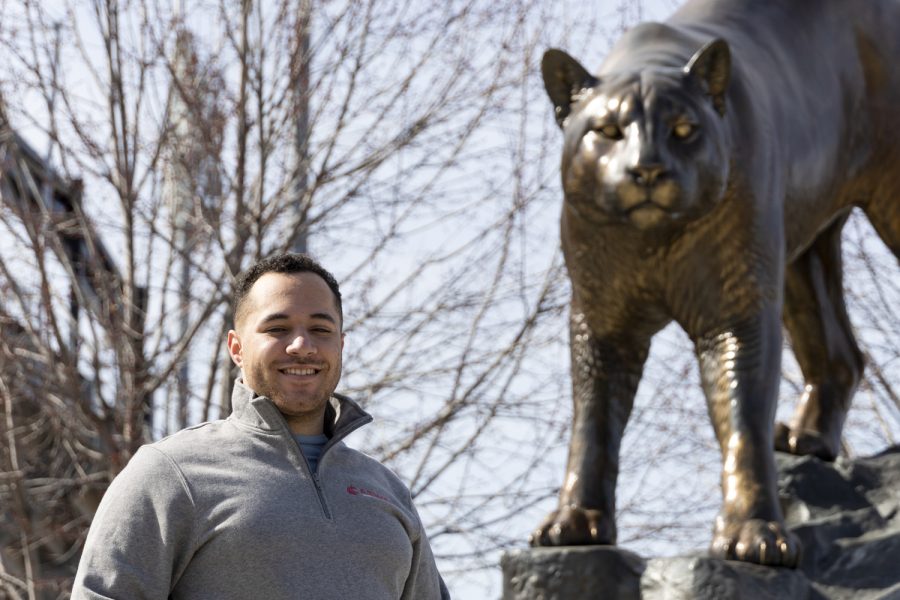 Political science major Jelani Christopher was instrumental in establishing the Cougar Food Pantry during his time on the ASWSU Senate.

Jelani Christopher has been learning the ins and outs of student government at WSU, with hopes to eventually influence widespread change in the U.S. government.

Christopher said he is the first person in his family to attend WSU. Hailing from Fremont, California, he wanted to go to WSU because of the variety in Pullman’s weather, the friendliness he experienced on campus and the opportunities WSU offered for his major. However, moving to Pullman was very different from the environment he was used to.

“It was definitely the hills, the weather … and I think just diversity-wise, it’s different here than back home in California,” Christopher said. “WSU’s still fairly diverse, but far less racially diverse than what I was used to.”

Christopher said he enjoyed a special topics class that focused on the 2020 presidential election. The main focus of the class was to follow the news and talk about the different aspects of the election, such as the debates.

During his time at WSU, Christopher participated in many school-sponsored activities, including spending three years as an ASWSU senator, working in the WSU Writing Center, and being a member of the Young Democrats. As a senator, he worked to establish the Cougar Food Pantry.

“For the senate, I just worked with a bunch of different people who all had different ideas, but I really enjoyed working with them,” Christopher said. “I also enjoyed working on the project I worked on last year, to get the food pantry fully funded as a senator. So it was a great experience being able to leave something behind that will help students in the future.”

Shae McCarron, AmeriCorps food pantry coordinator, worked with Christopher to help set up the food pantry. They said they would describe him as an empathetic person.

“He’s always thinking about how things are impacting the people around him,” McCarron said. “He’s devoted. He’s really dedicated to making this a better place. He always wants to make sure we’re doing things with the most mindful interest and the best interest for everyone involved.”

“It was so far into the semester and well after he designed the referendum that I finally got to talk to him,” McCarron said. “He was low-key my hero, and then I met him, and I was like, ‘Oh man, you really are as good as what you did.’”

When the food pantry was being set up, it was a team effort between many people — including Christopher — who always had valuable insight, McCarron said. McCarron has not been able to see him as much since the formation of the food pantry, but he still has good input during advisory meetings.

“The only time we get to speak with each other is the advisory board meeting. Everything has kind of been over Zoom, but that doesn’t mean that his ideas and his input [aren’t] good — he’s the reason we’re all here,” McCarron said.

McCarron said they appreciate Christopher for the difference he made in setting up the food pantry, and they encouraged other students to try to make a difference themselves.

“I don’t think he realized how big this was going to be. I think he did it with the best interest of the students in mind,” McCarron said. “If you think you can make a difference, make a difference. Just do what you can do to make it happen.”

Christopher said some of the events he enjoyed most at WSU were the sporting events and issue-based forums he helped put on. He also enjoyed hanging out with friends.

After graduation, Christopher said he has plans to move to Colorado to work as a middle school teacher for Teach for America, a nonprofit organization that recruits college graduates to teach in low-income communities.

Christopher recommends students take advantage of all the resources and opportunities they have at WSU.

“Go to class and talk to your instructor and just meet people. Really let yourself accept that it’s a time in your life where you might fail and you might succeed at things, and everything is an opportunity for growth,” Christopher said. “Don’t be discouraged by anything that might not turn out great the first time because there’s always another day to keep working. So make the money worth it and go have fun.”