Evergreener hopes to improve science communication at WSU, beyond

Emma Ledbetter will return to Pullman in the fall, is excited to come back to town she calls home 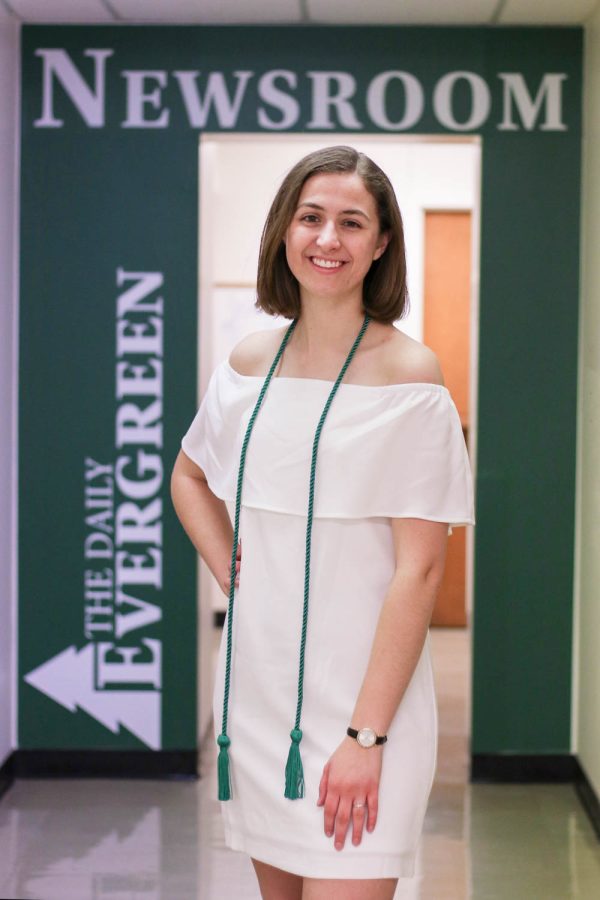 Senior Emma Ledbetter will graduate with a microbiology degree this spring. She hopes to build her career in science journalism and education.

When Emma Ledbetter first stepped foot on the WSU Pullman campus four years ago, she had no idea she would combine her microbiology degree and scientific interests in journalism, let alone how it would change the rest of her life.

Ledbetter said science has always been a large part of her life — starting in second grade with science projects like “The Bounciness Factor,” where she studied playground balls and how their size correlated with their bounce height.

“I won a ‘Best in Show’ award, which I was like ‘oh my gosh, I’m the winner,’” she said. “I got this really cool pop-up science book. It just had the most beautiful and detailed illustrations, and I know I still have it at home.”

When the time came to look into colleges, Ledbetter said she was interested in studying epidemiology. Out of the eight schools she applied to, she visited WSU last. Ledbetter said she instantly felt at home, and she decided to study microbiology after getting accepted because WSU did not have an epidemiology major.

“Here I was like, ‘I think I could actually be happy here,’” she said.

When she went to a Week of Welcome job fair her freshman year, she stumbled across a booth for The Daily Evergreen, Ledbetter said. She initially applied to be a copy editor, but was hired as a columnist instead, where she found her passion for writing.

After working as a columnist for the Mint section, she took on the role of Mint section editor. After that, Ledbetter said she worked as the social media editor for three semesters before becoming the editor-in-chief in spring 2021. She spent this last semester as the news editor.

To combine both writing and science, Ledbetter started a series in 2020 at The Daily Evergreen titled “Science Explained,” where she took difficult topics and worked to explain them in a way everyone can understand.

“She’s just a poster child for a scientist who communicates effectively or a journalist who understands scientists,” said Phil Mixter, associate professor in the WSU School of Molecular Biosciences.

Mixter said he first met Ledbetter three years ago when she interviewed him as a source for a Science Explained article about allergies. Ledbetter then took three of Mixter’s classes and now is his TA for a science communication class.

Throughout the past few years, Mixter said he has watched Ledbetter fuse her interests in journalism and science.

Following graduation, Ledbetter said she is spending three months in Iceland for an internship at The Reykjavík Grapevine, Iceland’s largest English language newspaper. She will cover news, arts and culture — mainly in the form of event previews and coverages.

Ledbetter has already visited Iceland once and loved the experience.

“When I was there last, I just felt at home, and everybody I met was really nice,” she said. “I am really looking forward to starting my post-graduation life … doing something I love just in a different place and with really cool people.”

Additionally, Ledbetter said she will have the opportunity to do photography and multimedia projects. After the three months are over, she will return to Pullman to create a STEM Writing Center with Mixter and two other faculty members.

Anna Elder, first-year veterinary student, has known Ledbetter since their freshman year. Elder said she is proud of Ledbetter and all her friend has accomplished.

“She really just takes initiative on a lot of things, and she’s always been that way,” she said. “But, it’s definitely developed over the last few years, and she’s just been more confident in what she does. It’s really cool to watch.”

Ledbetter said her experiences at WSU, especially at the Evergreen, illuminate the importance of forging your own path.

“Being flexible and being willing to try new things to see if that’s something you might want to do in the future, is super important,” she said.