Abby Davis came to WSU after visiting throughout childhood, made lifelong friends starting with Week of Welcome 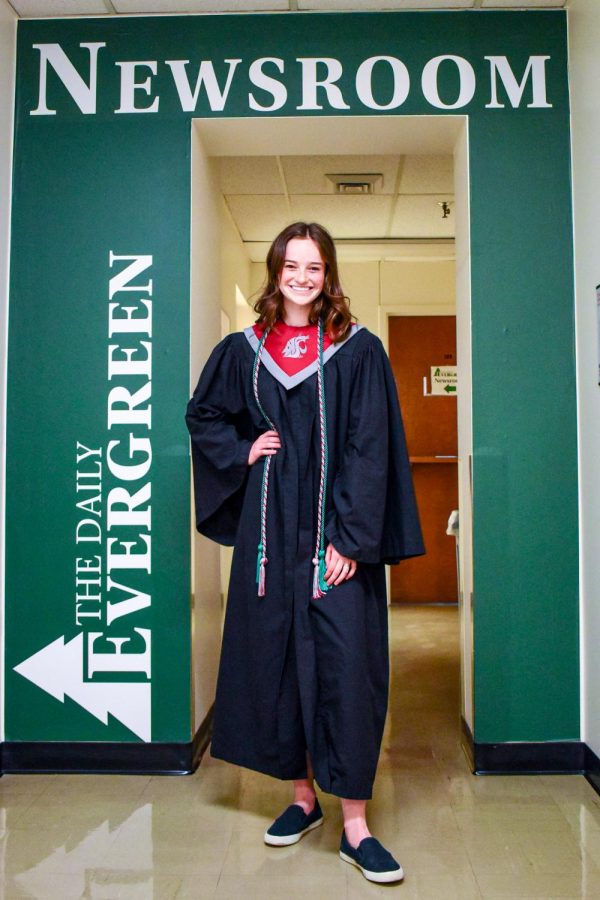 Senior Abby Davis will graduate this semester with degrees in Journalism and Media Production and Strategic Communication.

Editor’s Note: The reporter, Liam Connors, worked with Abby Davis for one semester at The Daily Evergreen.

In Serbia, journalists are often put in far more dangerous situations than their U.S. counterparts. Abby Davis, a 20-year-old broadcast news student, learned this firsthand when she produced broadcast news segments about her experience in the country.

Davis, along with Scholarly Assistant Professor Alison Boggs and three other WSU students, explored this lack of press freedom in the Balkan country through the Murrow Backpack Journalism Program over spring break.

“I met new journalism heroes every single day when I was there,” Davis said. “It was just so cool interviewing, swapping with the different international students and just making new connections and building relationships with international journalists, which I’d never even envisioned myself doing.”

Sydney Finch, a 21-year-old finance major, is one of Davis’s closest friends. She said she regularly reads all of the content Davis produces for different mediums and said her pieces in Serbia have been her favorite.

“The fact she went overseas to cover a very important issue and cover it well is just so inspiring,” Finch said. “I’m so proud of her.”

Boggs, who already had Davis as a student for her COMJOUR 333 class, said all of the drive and creativity she saw back then had blossomed into something that far exceeded her already high opinions of Davis’s abilities as a journalist.

Boggs said Davis shined early during her time in COMJOUR 333. She said the multimedia project she produced really highlighted her ambition and creativity. The project was about a seal in her hometown of Anacortes, Washington, that had befriended some of the local residents.

“I initially thought it was going to be a cute little feature on a seal,” Boggs said, “but she ended up talking to fish and wildlife experts for the story and really just went above and beyond what was required of her.”

Davis’s passion for journalism and editing bloomed with her experience at the student newspaper at Lynnwood High School.

When she moved to Anacortes, the high school did not have a newspaper. However, they did have an advanced digital media class called “The Rock,” where she and her peers would broadcast to the school every Thursday, she said.

“All the classes would watch it, and I’m sure all of our classmates thought we were really dorky, but it was just so much fun to do,” Davis said.

Her love for broadcast has also been reinforced with her experience participating in Murrow News 8. The rotating positions, the practical experience she has gained and the friendships cultivated have just added further excitement to her future career goals, she said.

Davis credits Boggs with her decision to join The Daily Evergreen. She officially joined in November of 2020 as a news reporter. She then served as deputy news editor in spring 2021 — a position she later returned to this spring — along with a stint as managing editor in summer 2021 and copy chief in fall 2021.

“Taking on a position of leadership was something I was pretty apprehensive of at first because I hadn’t been here for very long,” Davis said, “but Emma Ledbetter [and] my news editors Jayce Carral and Cheryl Aarnio were just such huge champions of mine, so I knew I had a great support system and realized it wasn’t as intimidating as I was making it out to be.”

Davis said people who want to improve their writing really fast should join the Evergreen because it puts them in a lot of real-life practical scenarios that they would not experience typically in class.

Davis said that her path to WSU was made easy because of the alumni in her family who visited Pullman frequently throughout her childhood.

“Me and my family would come up once a year and stop by Ferdinand’s and go visit the bears,” she said. “I always had those fond memories in the back of my head.”

Davis said a lot of her closest friends were the people she met during Week of Welcome her freshman year.

“She’s the person you go to if you’re ever having a bad day and just need somebody to vent to,” she said. “It’s been just such a blessing getting to know her and building our friendship over the past couple of years.”

Davis said she is nothing but grateful for all of the experiences, friends and lessons learned during her time at WSU. She said she has no regrets about her time here and would not change anything for the world.

“Learn from your mistakes, be open minded and make sure you soak in everything your professors, editors and mentors are telling you,” Davis said. “Recognize that you’re going to make mistakes and understand that this is a learning environment, and you are not alone, and there are plenty of people to support you.”