The Daily Evergreen • May 15, 2022 • https://dailyevergreen.com/134287/news/womens-march-foundation-organizes-abortion-rights-protest-downtown/ 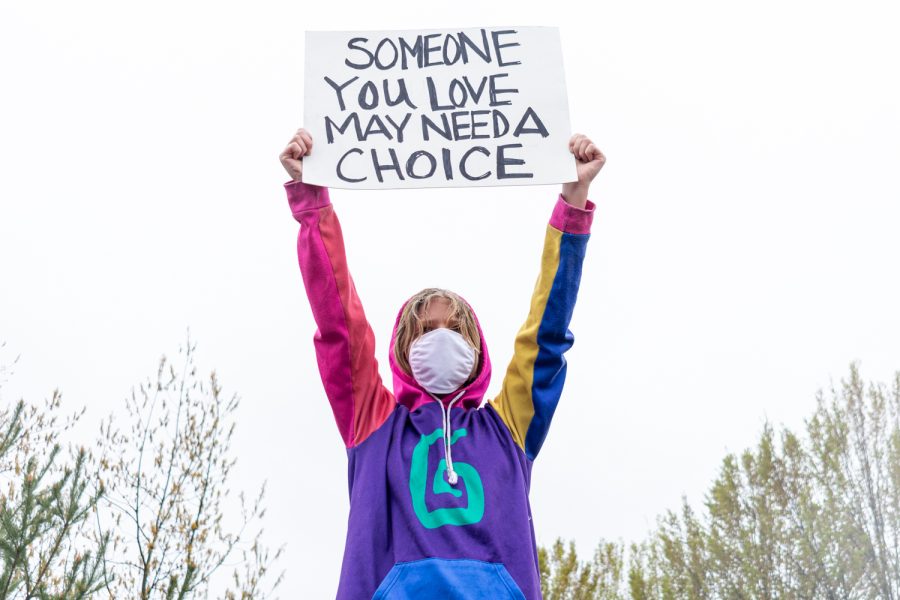 Isavan Kuiken holds her pro-choice poster high despite the rain at the Women's March Foundation's Bans Off Our Bodies rally, May 14.

On Saturday, over 50 protestors gathered at Cougar Plaza to protest a potential Supreme Court decision to overturn Roe v. Wade.

Volunteers and activists of all ages attended the Bans Off Our Bodies rally from 11 a.m. to noon, raising awareness for women’s right to access abortion.

Event organizer Diana Whitney, who has over 30 years of volunteer experience, said it is paramount that Roe v. Wade not be overturned. She hopes this protest will do its part in retaining women’s right to personal autonomy.

Rev. Steve Van Kuiken, pastor for the Community Congregational United Church of Christ, stood in solidarity with the activists with a sign that said, “Pro-Choice Pastor.” He said one of the core tenants of his church is that women are human beings and should have the right to control their own bodies.

“I’m out here for justice [and] respect for women, particularly low-income and women of color who are going to be disproportionately affected by this impending abortion ban,” he said.

“We as educated, privileged white women are not the ones who are going to be the most affected,” Andelin said. “It’s going to be our Black and Indigenous people of color and impoverished women who may not have the time or resources to be advocates.”

Andelin said if people cannot be forced to donate their organs without explicit consent, women should not have to sacrifice their basic autonomy.

Draney grew up in a conservative, Christian community, where they viewed abortion as murder and that every life is valuable and loved by God, but she believes that the actions taken by the Supreme Court do not support that belief.

Regarding those opposed to Roe v. Wade, Andelin and Draney said if people are going to take a pro-life stance, then they must address the root causes of unwanted pregnancies, like accessible and affordable contraception and comprehensive sexual education.

“If you are pro-life, then why aren’t you in favor of affordable healthcare, easy accessible housing and things to support people who would be willing to make that choice?” Draney said.

Pro-life often refers to when the baby is inside the womb. However, once the baby is outside of the womb, they are conveniently ignored, Van Kuiken said.

He said that education, childcare, minimum wage and other components that promote life should be priorities of the opposing side, but he believes pro-life advocates are hypocritical because they generally do not prioritize such positions.

The Supreme Court is making its official decision on abortion rights in June. If the ruling is overturned, rallies will be held nationwide two weeks after the decision, Whitney said.