The Daily Evergreen • May 23, 2022 • https://dailyevergreen.com/134351/news/16000-student-employees-make-meaningful-change-after-filing-petition-to-unionize/ 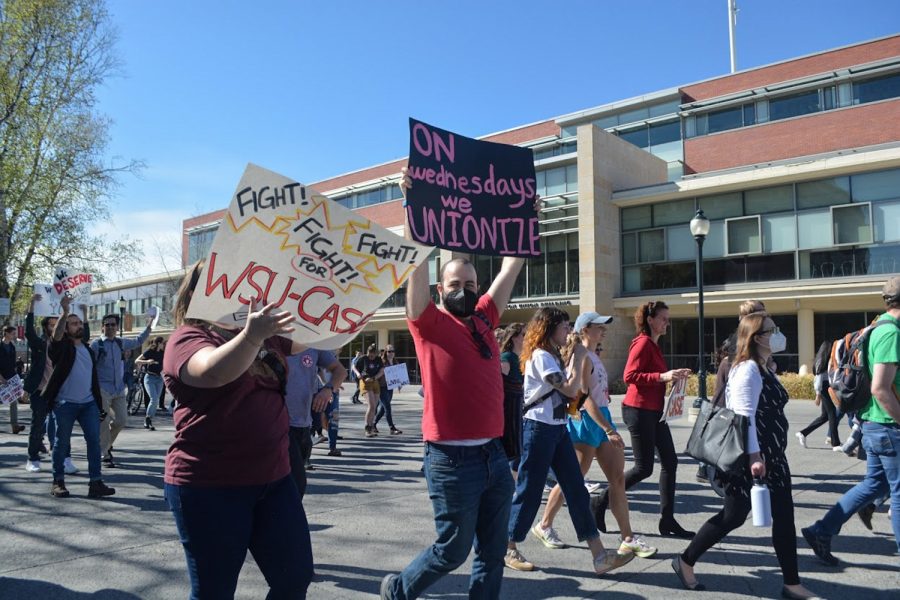 Academic student employees march toward WSU Pullman's French Administration Building to present their petition to the administration at a rally, May 4.

On May 4, more than 100 academic student employees marched to the French Administration Building with their petition, hoping to unionize and take ownership of their work.

Raising posters that said, “on Wednesdays we unionize” and “will grade for living wage,” the WSU Coalition of Academic Student Employees joined a widespread movement across all WSU campuses to secure higher wages and fair working conditions.

“We want to see the education system as a whole change for the better. That can’t happen without unions,” said Claudia Skinner, doctoral candidate in American Studies and Culture. “The way things are currently going now, academic student employees are either being broken down by being in their program or just have to leave because it’s not sustainable for them.”

WSU-CASE will continue the momentum from its rally by encouraging academic student employees to sign authorization cards and have conversations with each other, forming a network of communication, Skinner said.

She said authorization cards are essentially votes to support students unionizing. Over the next few months, the Public Employment Relations Commission will use these cards to verify that over 50% of academic student employees want to unionize. The cards must be compared to an employment list from WSU before the union is certified.

Although the university has not yet provided an employment list, WSU recognizes the right of student employees to organize labor unions, said David Wasson, director of news and media relations.

“We are the last public, major research institution on the West Coast [to unionize],” she said. “I think that shows we are kind of behind in just having a more equitable course of change for student employees.”

Brinkman said student employees are struggling to cover their cost of living due to small stipends and increased tuition and fees. Having a disability, Brinkman understands how out-of-pocket healthcare costs can reach a maximum of $7,000 – half of academic student employees’ annual income.

In the past five years, wages for graduate students at WSU have only increased by 5.4% compared to a 32% increase in wages for unionized student employees at University of Washington, according to the WSU-CASE website.

“As graduate students, we’re providing services that directly benefit the university, but our pay does not reflect the work that we do,” Brinkman said.

Skinner said low wages and discriminatory work environments especially impact students from low-income backgrounds and underrepresented communities. Unionizing creates a sense of solidarity between academic student employees, proving students do not have to face these issues alone, she said.

“If we have this network, we’re able to support each other when we’re in trouble,” Skinner said. “We’ve heard from our conversations with other ASEs they’ve had discriminatory [principal investigators] they’ve been working with. As an international student, that’s really scary. You don’t know what the conditions are like in America, you don’t know how the culture is different and sometimes the PIs can take advantage of that.”

Yiran Guo, doctoral candidate in material sciences and engineering, found himself in a similar situation during his first year as a graduate student in 2019.

His first research adviser expected students to work 14 hours per day and held international students to unreasonable standards, he said. She also pushed him and his fellow employees to disclose their medical information and forbade them to leave Pullman without her approval.

When Guo did not comply, he was denied time with his adviser, requests for equipment and participation in group meetings, he said.

Guo said he successfully began a case with Compliance and Civil Rights, but his adviser provided false information during the investigation to portray him as dishonest.

“She would go to that extreme to discredit a student, to isolate a student from the research group and basically tell other students ‘there’s something wrong with this person,’” he said.

Guo said many students will not seek help in these situations for fear of losing their position and paycheck, but unionizing will create a university-wide support system for students.

For this movement to succeed, WSU-CASE partnered with United Auto Workers. This organization has decades of experience with bargaining under Washington state laws and helped student employees from UW create change through unionization, Brinkman said.

She said they will speak with UW’s union this summer to collaborate and discuss its unionization process. WSU-CASE will also meet on Wednesday to finalize an extensive survey addressing student concerns and strategize with other WSU campuses.

Skinner said it has been empowering to work alongside academic student employees who are passionate about making a difference in their local communities and across the nation. WSU-CASE is confident it will rectify the power imbalance between WSU and student employees.

“I just know — from seeing what’s been able to happen at other universities through unionization — that meaningful change will come from this,” Skinner said. “It will improve so many people’s lives directly because of the work they’ve put in. This point that we’re at — it belongs to every single person who’s been a part of this effort.”