The Daily Evergreen • May 26, 2022 • https://dailyevergreen.com/134486/sports/cougs-put-dawgs-in-dismay-in-tournament-play-brewed-by-bruins-in-april-pac-12-championships/ 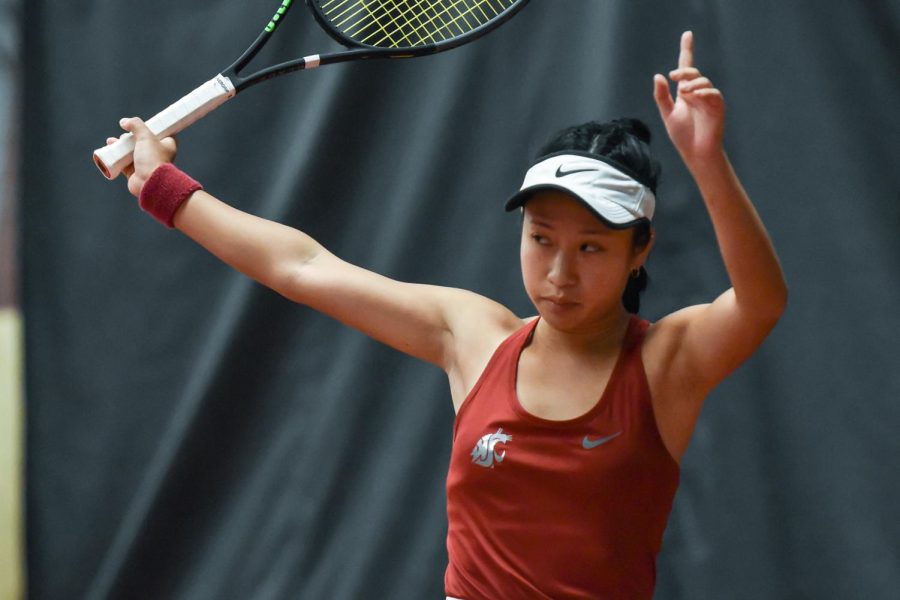 Savanna Ly-Nguyen celebrates a point during a doubles match against Idaho, Saturday, Jan. 29, at Hollingbery Fieldhouse.

In April, WSU tennis (8-14, 3-8) proved once again they are the best in the state when they faced No. 35 University of Washington (14-11, 4-6) in Ojai, Calif. in the first round of the PAC-12 Championships. After a convincing victory over UW, the Cougs fell to UCLA in the quarterfinals.

It was a rough regular season for the Cougs as they went 7-14 with just two conference wins, but April 20 marked the start of the postseason and a clean slate with the first round of the PAC-12 Championships,

Thankfully, one of those conference wins was against the purple school in the last match of the regular season.

On Senior Day, the Cougs celebrated the incredible contributions of fifth-year Michaela Bayerlova and senior Savanna Ly-Nguyen by beating UW 4-3. Both seniors won their respective doubles matches en route to the doubles point and both seniors dominated on their way to singles wins.

Bayerlova won the 90th match of her career, the seventh most in program history.

Fifa Kumhom provided the last second thrill the Cougs needed as she overcame a bad first set to narrowly win the second set and dominate in the third set.

Entering their second match with UW in five days, the Cougs knew they needed to compete at a high level once again to keep their season alive.

“We just saw what [UW has] and it’ll be a different setting, this will be outdoors. But I think, you know, we ride this energy into the next week,” head coach Raquel Atawo said after WSU’s April 15 Apple Cup win.

The rematch got off to a rocky start with the Cougs losing the doubles point when five days earlier they had won it.

The No. 62 doubles pair in the nation, Bayerlova and Maxine Murphy could not beat the former Coug Hikaru Sato and Vanessa Wong a second time as they lost 6-4.

Hania Abouelsaad and Kumhom lost their match, 6-4, as well to concede the doubles point to UW.

With the doubles point decided, Ly-Nguyen and Yang Lee’s match was stopped when they were tied 6-6.

WSU needed to win four of the six singles to keep their season alive. Under the California sun at the Ojai Valley Tennis Club, that is exactly what they did.

Ly-Nguyen defeated Nika Zupancic in straight sets for the second time in five days, winning, 6-2, 6-1. She earned her 22nd win of the season.

After losing a first-set tiebreaker en route to a straight-set loss to Yolanda Lin last week, Abouelsaad claimed a straight set victory of her own to give the Cougs a 2-1 lead.

Elyse Tse came out firing on all cylinders shutting her opponent out in the first set and gaining the upper hand in the second set to claim the first conference win of her college career, 6-0, 6-4. Just like that, the Cougs were up 3-1 needing one more win to win the match and advance.

With a second shot at her former team, the Cougar deserter Sato kept the Cougs at bay beating Murphy in straight sets five days after it took her three sets.

The Apple Cup hero Kumhom once again clinched victory for WSU as she faced Zoey Weil. Weil beat Lee in straight sets five days earlier but was not so lucky going against her. Kumhom, who posted a pair of 6-4 sets to clinch victory for the Cougs.

With a 4-2 Cougar victory secure, Atawo called off her No. 1’s match. Bayerlova, the then No. 43 player in the nation, played an intense match against the then No. 107 player, Wong. Bayerlova took the first set via tiebreaker and was down 1-2 when Kumhom claimed the second straight victory over UW for the Cougs.

The Cougs posted back-to-back wins over the Huskies for the first time since 2006 and 2007.

The next day, the Cougs stayed in Ojai to face UCLA.

In 2021, WSU’s championship aspirations were busted by UCLA in the quarterfinals. A rematch in 2022, netted a similar UCLA domination.

Elyse Tse was the only Coug to win her singles match, winning in straight sets by virtue of winning a second set tiebreaker.

Bayerlova and Ly-Nguyen did not finish their singles, each having lost their first set and trailing in their second set.

The Cougs enter the summer losing their two best players but with an excellent opportunity to maintain the winning legacy set by Bayerlova and Ly-Nguyen.

Bayerlova, is the last Coug standing, earning a chance to compete in the NCAA Singles Championships. As of Thursday, she had won three matches and advanced to the quarterfinals.