The Daily Evergreen • May 30, 2022 • https://dailyevergreen.com/134599/news/local-police-officers-firefighters-attend-active-shooter-response-training-this-week/ 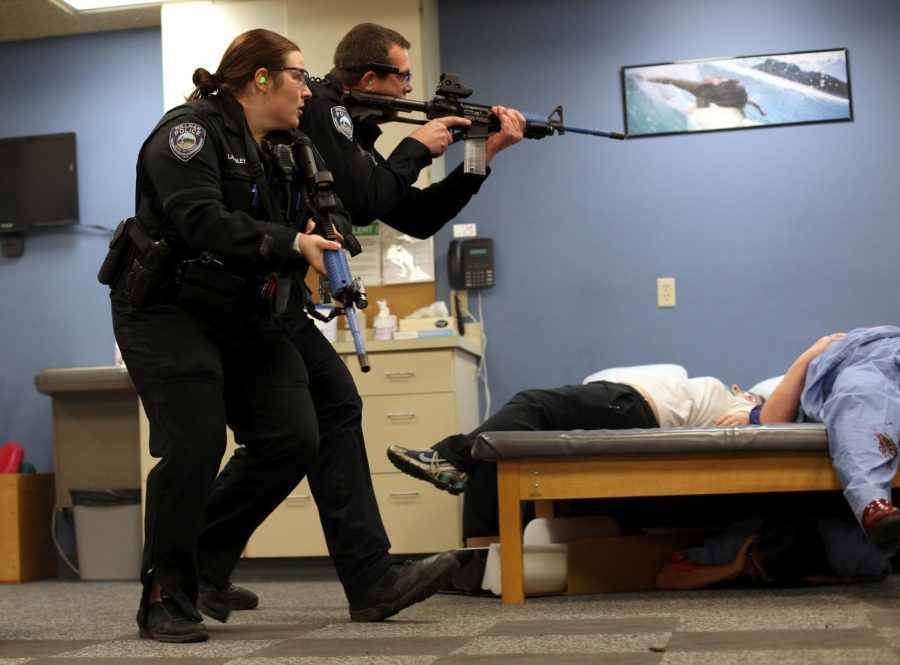 “We have to be ready. If we’re not ready and prepared, people are going to die,” said Aaron Breshears, Pullman Police Department detective sergeant.

Although the exercises were scheduled several months in advance, their preparation is significant in light of the mass shooting at Robb Elementary School in Uvalde, Texas last week. The shooting on May 24 was carried out by an 18-year-old gunman who killed 19 children and two teachers, according to NBC News.

“I’ve been an officer for 24 years. I’ve seen what’s happened in the surrounding communities when we’ve had those devastating [situations],” said Dawn Daniels, WSU Police Department administrative sergeant. “As an officer, I always want to protect the community as much as possible. I mean, that’s what we do the job for.”

On Monday and Tuesday, 15 officers from WSU, Pullman and Colfax police departments – along with deputies from the Whitman County Sheriff’s Department – will participate in active shooter simulations at Wilmer Davis Hall, Daniels said.

During the training exercises, emergency vehicles will be parked near the residence hall. Daniels said passersby may hear officers firing blank and paint rounds, which replicate the sound of gunfire and mark officers’ targets with paint.

In a simulated active shooter scenario, law enforcement officers will search a building, move in formation, enter a crisis site and isolate a “shooter,” according to the Advanced Law Enforcement Rapid Response Training website.

Learning advanced techniques from the program ensures local police departments are successful in deescalating these situations, and it reassures community members that they are making every effort to train officers to the best of their ability, Daniels said.

Breshears said officers will also receive statistical information from active shooter situations in the past, critically evaluating how they can learn from those failures in the future.

Officers will work with firefighters in a simulated “warm zone,” an area where the shooter is unapprehended and caused potential casualties, to quickly find and evacuate injured individuals, Breshears said.

Without this collaboration during previous mass shootings, Breshears said EMS was not able to reach injured individuals in time and prevent unnecessary deaths.

He said a similar mistake was made 23 years ago during the shooting at Columbine High School in Colorado, where police officers waited for specialized units to apprehend the gunmen, and victims died from a lack of rapid medical treatment.

“That was something that was really a wake-up call for the law enforcement community – that we need to do things differently to save more people. That is ultimately the goal of this training — to save as many lives as possible,” Breshears said.

Delayed responses from law enforcement were also a source of public outcry in Uvalde at Robb Elementary School last week.

Students and parents urged police officers to breach the adjoining classrooms where Salvador Ramos killed children and teachers, but authorities took more than an hour to fatally shoot Ramos, according to Associated Press News.

Steven McCraw, Texas Department of Public Safety director and colonel, said in a news conference that the school district’s police chief advised officers to wait before confronting Ramos, believing it was no longer an active attack, according to Associated Press News.

Breshears said mass casualty events were traditionally handled by Special Weapons and Tactics teams, but police departments are now asking line-level patrol officers to enter these high-risk situations, regardless of their assignment.

“We are asking police officers to do one of the most dangerous things that they may ever do in their career,” he said. “To go and make entry under the threat of gunfire, to eliminate a threat, to save lives.”