The Daily Evergreen • May 30, 2022 • https://dailyevergreen.com/134610/sports/six-cougs-qualify-for-national-championships/ 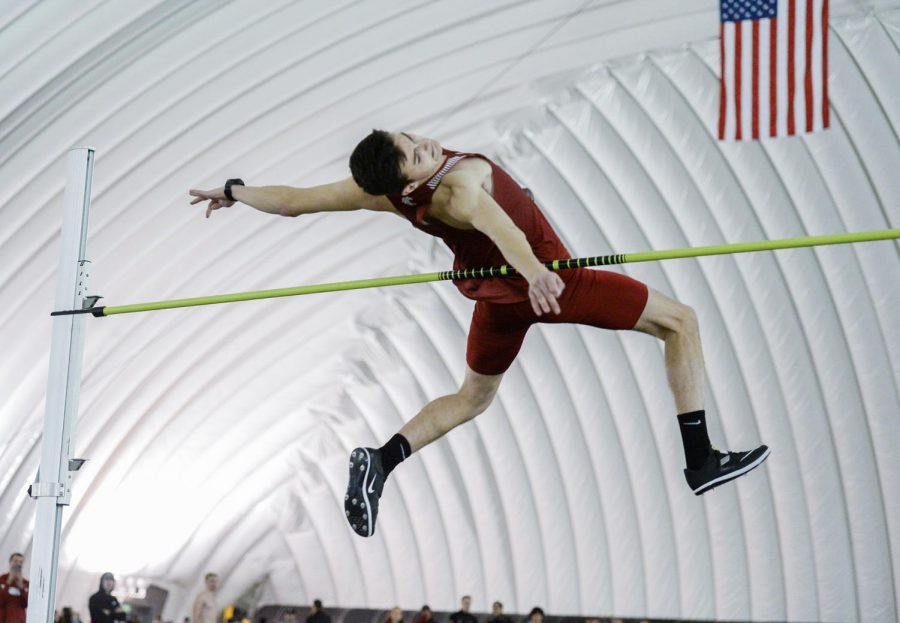 Then-sophomore Mitch Jacobson clears the bar in the high jump at the WSU Indoor Meet January 19th 2019 at the Indoor Practice Facility.

Six Cougs will head to Oregon in June for the NCAA Division I Track and Field Championships including the Pac-12 freshman of the year, Micaela De Mello.

By virtue of their success at the NCAA Division I West Regionals at John McDonnell Field at University of Arkansas in Fayetteville, Ark. over the weekend, three men and three women will represent WSU in their respective events in the next round of the national championships.

On Wednesday, Jacob Englar finished in ninth place in the men’s pole vault with 5.29m, qualifying for nationals. Zach Stallings advanced to the quarterfinal round of the men’s 1500m with a time of 3:45.86. Ben Chappell competed in the hammer throw, Ronald Grueso Mosquera competed in shot put and Jared McAlvey competed in the 400m Hurdles.

On Thursday, a pair of freshmen stood out. Valentina Barrios Bornacelli finished the javelin throw 11th overall (50.63m). De Mello advanced to the quarterfinal of the women’s 100m hurdles with a time of 13.24 seconds.

On Friday, the men’s west regionals came to a close. Mitch Jacobson and Colton Johnsen joined Englar as national qualifiers. Jacobson is headed to his third straight NCAA Championships, achieving third place and tying his personal record in the high jump (5.18m). Johnsen won the second heat of the 3000m steeplechase. His ninth-place finish earned him a trip to the NCAA Championships.

Grueso Mosquera finished within three feet of his PR but did record his season-best mark in his first-ever west preliminary. Stallings fell 0.75 seconds short of qualifying with his 16th-overall finish. Freshman Kelvin Limo also narrowly missed a trip to nationals finishing in 16th place. He did however record a PR of 8:45.28.

On Saturday, the women’s west regionals came to a close. Aislinn Overby and De Mello qualified for nationals.

Overby cleared 1.81m, one centimeter below her PR on her third try to finish 12th overall. De Mello broke the WSU program record in the 100m hurdles for a fourth time in her first college season. She finished fourth in the first heat at 12.98.

WSU’s cross state rival UW had 16 athletes qualify for nationals, tying their program record for the most individual qualifiers under the current NCAA outdoor format which began in 2010.