Demolition will last until June 24; closure will improve student safety 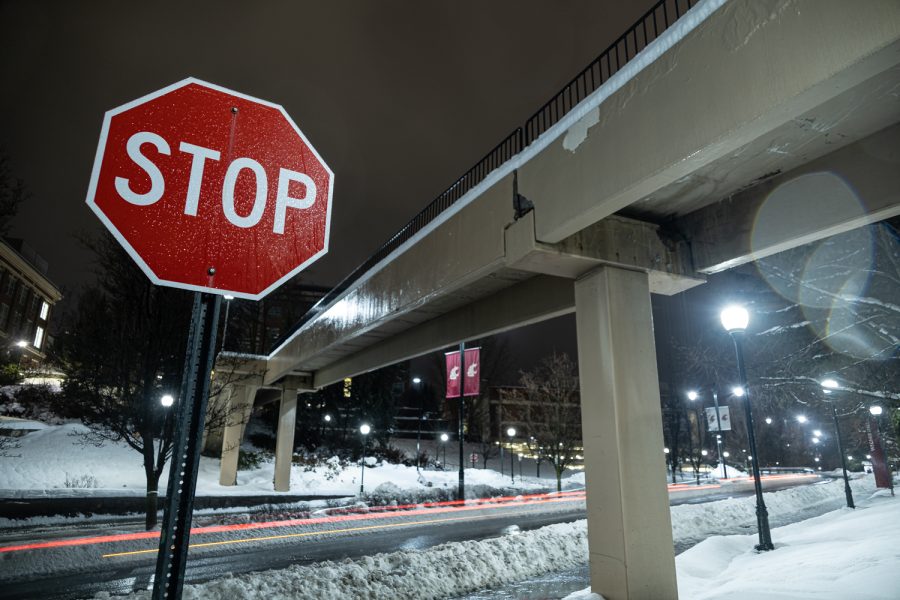 The pedestrian bridge between Troy Hall and Wegner Hall over Stadium Way remains closed to the public, Thursday, Jan. 6, 2022.

From 2019-2020, the bridge started showing signs of degradation with concrete coming off of it, and the damages only became worse from there, said Phil Weiler, WSU vice president of marketing and communications.

After an assessment from a civil engineering firm, the university decided to close down the bridge for safety reasons, Weiler said.

“We didn’t want people crossing the bridge if there was some concern [for student safety],” he said. “Based on that report, it was pretty clear that the bridge [has] gone through its useful life. It’s about 50 years old, and it was starting to fail.”

The demolition process will continue through June 24, Weiler said. The process began during the summer so students would not be impacted by the construction while going to class.

Traffic will be shut down in both directions on Northeast Stadium Way near the bridge during the demolition period, he said. From June 27 to July 1, the street will be open, but drivers may face periodic lane closures. Crew members will remove the last portions of the bridge from July 5-22, closing a portion of College Way during that time.

“People are going to experience disruptions in travel in that area. … There will be detours for walkers and drivers so they can get around the construction,” Weiler said. “Starting Monday, we will advise people to try and avoid that section so they don’t have to worry about the detour.”

From June 13 to July 24, motorists can drive around construction by turning left on Grimes Way and continuing through Olympia Avenue. After June 27, motorists will be directed through Northeast Stadium Way, according to a pedestrian and traffic detour demonstration from the Department of Public Works. Pedestrians can walk past the demolition site through Northeast College Avenue.

When the bridge was functioning, public transit users would walk across the bridge to get to a bus stop without going through heavy traffic. After the bridge demolition is complete, the university will focus on improving the crossing along Northeast Stadium Way, Weiler said.

“The next step is to actually work with traffic engineers to make sure that the intersection is going to be as safe for walkers as it can be,” he said.

Facilities Services is also working toward repairing the Johnson Tower pedestrian bridge, which is expected to reopen soon, according to a WSU press release.