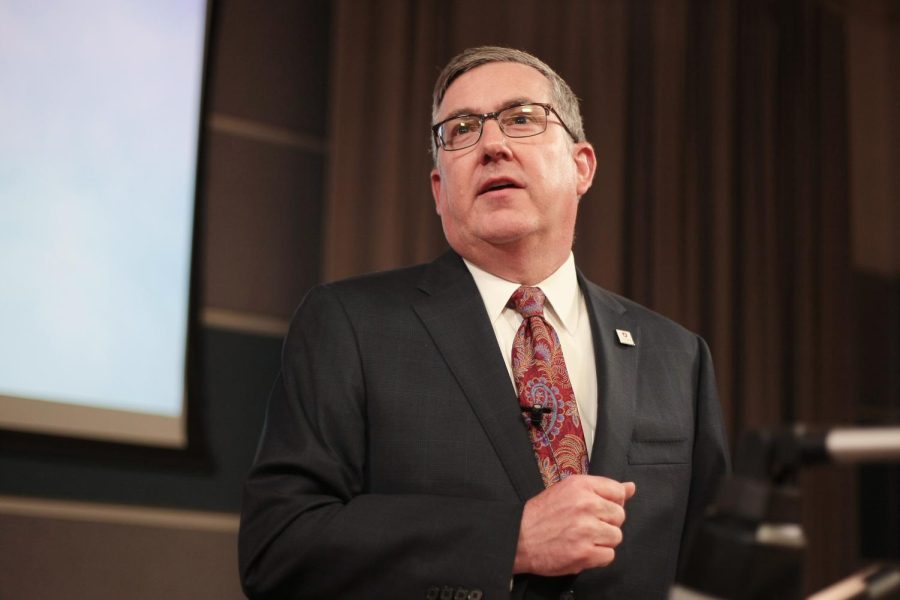 After launching a three-year financial recovery plan in 2016, WSU President Kirk Schulz turned a $30 million deficit into a $28 million surplus for the university's budget.

Editor’s note: some names have been left out to protect their identity.

As of July 1, WSU President Kirk Schulz will receive a 20% increase in his annual base salary – his first pay raise since arriving at WSU in 2016.

To compensate Schulz for his financial achievements and bring his salary to a competitive market rate that is on par with other university presidents, the Board of Regents unanimously voted to raise his base salary from $625,000 to $750,000 on June 7, said Board Chair Marty Dickinson.

“What he has done for Washington State University during his tenure is unprecedented,” she said. “Recognizing that we want to continue the momentum and effort with his leadership on many things, this was an important step to [take].”

Schulz will also receive retention incentives, bonuses for committing to the university for a certain period of time, on June 30 and July 1, amounting to $100,000. After Aug. 1, he will receive an annual retention incentive of $200,000, Dickinson said.

Additionally, the board voted to grant Schulz monthly housing stipends of $2,500 as Pullman Chancellor Elizabeth Chilton moves into the President’s House on campus, she said.

In the past, Dickinson said the president has demonstrated a commitment to creating a “fiscally healthy” university, especially during the pandemic when he took a 5% pay reduction and refused $25,000 retention incentives for two years.

Phil Weiler, WSU vice president of marketing and communications, said the president’s actions promoted solidarity during a time when the university had to reduce spending.

“He just felt like if the institution was having to tighten its belt, he would do the same,” he said.

After one of the most “challenging academic years ever,” Schulz’s pay raise and retention incentives “sting” for students who are struggling with school costs, said an anonymous sophomore business management major.

The university would rather increase compensation packages and push Schulz’s salary closer to $1 million than consider reducing tuition, he said.

An anonymous WSU alum in the graduating class of 2019 said Schulz’s additional $125,000 would be life-changing in terms of scholarship money, retaining employees and improving deteriorating programs like computer science.

While current and former students are dealing with school and economic costs, the salary raise seems like just a “percentage point” for the president, he said.

Dickinson said Schulz’s pay should reflect his leadership during his tenure, which allowed the university to operate at a level of excellence.

In 2016, Schulz became WSU’s president during a “significant fiscal shortfall” when the university faced a $30 million annual operating deficit, Weiler said. After launching a three-year fiscal recovery plan, Schulz turned the deficit into a $28 million surplus for the university’s budget by reducing spending across all departments and increasing enrollment rates.

The board also recognized Schulz for generating more than $754 million in philanthropic giving for the university and increasing research awards from $290 million to $368 million, Dickinson said.

“Just those components alone I think speak specifically to the value of President Schulz and the necessity for us to bring his salary up to market rate,” she said.

Throughout his tenure, Schulz’s base salary was $125,000 less than that of his predecessor Elson S. Floyd, Dickinson said. At University of Washington, President Ana Mari Cauce received a base salary of $842,760 two years ago, according to UW News.

Schulz’s presence on a national level was also a determining factor in his pay raise. Throughout his tenure, Schulz was considered for the Big 12 Conference commissioner and president of the National Collegiate Academic Association despite remaining committed to WSU, Weiler said.

“President Schulz was very quick to say, ‘I am happy where I’m at. I love Washington State University, and I want to stay,’” he said. “I think that the board wanted to demonstrate to the president that they appreciated his service to WSU and that they wanted to keep him here.”

Although Schulz’s salary will increase by 20%, the board believes WSU’s other faculty and staff are not receiving enough compensation next year, Dickinson said. The board will address the “modest”  2.5-3.25% salary increase at the next legislative session in January.

“We believe our WSU employees are some of the very best of the best,” she said. “We value the effort and the education they’re providing our students, and we want to ensure that they are being recognized for their effort, their time and their knowledge.”

The Washington State Legislature will fully fund pay raises for classified staff. For faculty, administrative professional staff and graduate assistants, WSU must contribute between $2.5 and $3 million annually to cover the salary increase, Weiler said. Raising tuition was one solution to this issue.

“That isn’t a position that I think the president or the university feels good about. This isn’t something that we want to push onto the backs of students in the form of tuition,” he said.

Weiler said the university is continuing to work with the state legislature and encouraging them to fund 100% of salary increases.

“I think that in the future … we’ll be looking to have faculty and staff pay increases, but making sure that those pay increases don’t come at the cost of tuition for students,” he said.