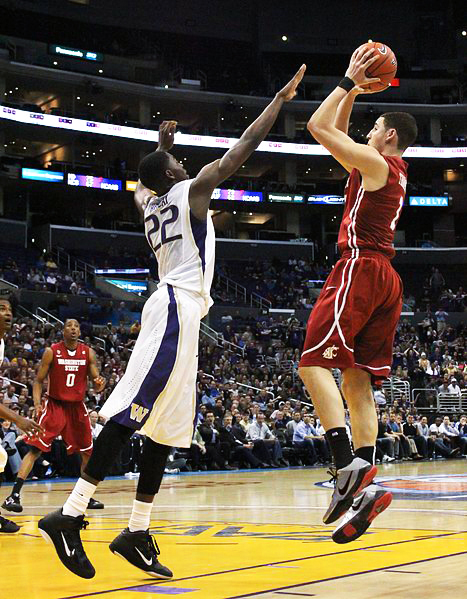 Klay Thompson played for WSU from 2008-2011 and was the 11th pick in the NBA Draft selected by the Golden State Warriors. Thompson’s jersey will soon be retired at WSU.

The Golden State Warriors took a 3-2 lead over the Boston Celtics in Game 5 of the NBA Finals.

Andrew Wiggins showed up and showed out in Monday’s game, the biggest game of his career. The first-time All-Star was the difference maker as Wiggins went for a playoff career high of 26 points and his second-most rebounds in his playoff career with 13 after he had 16 boards in Game 4.

He played well at the perfect time in the fourth quarter scoring ten points and grabbing five rebounds, which helped push the Warriors over the top and to win the game.

Stephen Curry played the worst Finals game of his career, shooting an abysmal 7/22 and 0/9 from three. He scored 16 points and had eight assists. This broke the NBA record streak of 132 consecutive playoff games with at least one three. Also being his first game since Nov. 8, 2018, that he hasn’t made a three-pointer, which is 233 straight games.

WSU Alum Klay Thompson was a difference-maker for the Warriors as well, he was the second-leading scorer on the team with 21 points. He finished with his 2022 Finals best shooting performance going 7/14 and 5/11 from three.

It is also important to note that the Warriors played well as a whole team, each starter with a positive plus/minus, and the bench contributed 31 points.

The Celtics were not as fortunate. They are more athletic than the Warriors and are much larger than Golden State, yet were not able to capitalize.

The offense seemed stagnant in Game 5, except for an explosion of 35 points in the third quarter they were unable to score more than 23 in any other quarter. At half, they only had 39 points and ended the game with only 94.

The Boston bench led by Derrick White, who was 0/4 in 21 minutes of game time, was only able to score a total of four points during important game time, adding six more during garbage time, the last minute of the game.

Boston was unable to overcome the turnover difference of 12 in the game as they had 18 themselves and Golden State only six.

The scene shifts to Boston one last time for Game 6. This is peak time for WSU fans as former Coug, Thompson has excelled in Game 6’s of his career and “Game 6 Klay” is a well-known threat to finals opponents and treat for NBA fans.

Since erupting for 41 points in Game 6 of the Western Conference Finals in 2016, Thompson has been able to average almost 30 points in each Game 6 of his career.

As Golden State leads Boston 3-2 in the 2022 NBA Finals, Game 6 could end the series if they are able to beat Boston for a third straight time.