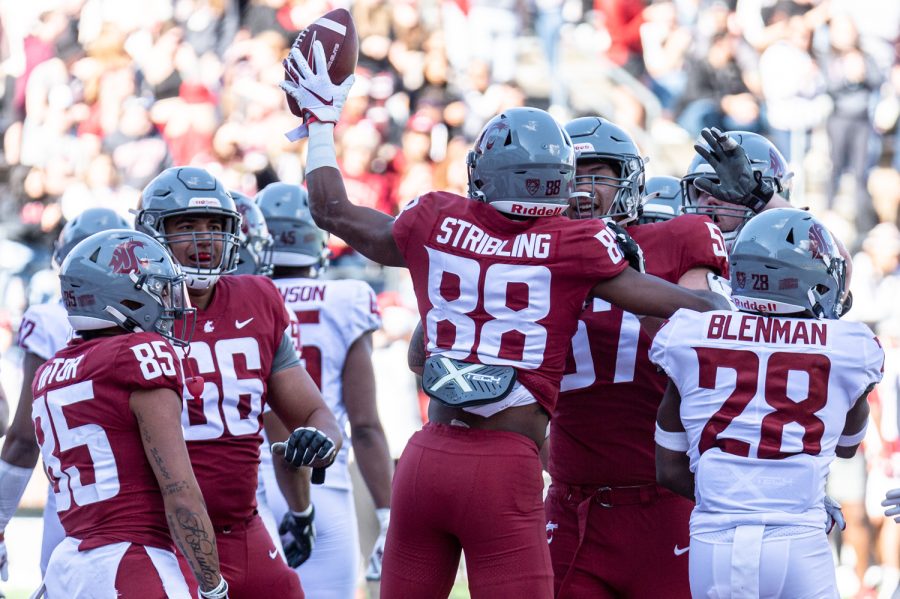 WSU wide receiver De'Zhaun Stribling celebrates with teammates after scoring a touchdown during the 2022 Spring Game, April 23, at Martin Stadium.

Phil Steele, a highly respected NCAA football journalist, has released his predictions for All-Pac-12 selections and the ranking of the teams at the end of the season.

Stone is a lock to be on the First Team All-Pac-12 barring injury. In 2021, he had 64 total tackles with five sacks and one forced fumble. Stone is a leader on the WSU football team and has become the best player on the field when he touches the gridiron.

If he is able to match the production he put up last season Steele is correct in his pick.

However, Stone is likely to bring those stats up furthering his breakout. The best WSU defensive lineman since Hercules Mata’afa, Stone has the potential to have an incredible season.

For First Team All-Pac-12 kicker it seems to be a two-man race between WSU’s own Janikowski and Oregon’s Lewis. A lot of kicking success depends on how successful an offense is, for example, the more extra points a kicker gets the better there is a higher likelihood of his total points being higher.

Either of these kickers is a good selection for First Team All-Pac-12. Similar to last season when Janikowski finished first and Lewis finished second, they will likely finish at First Team and Second Team, depending on how the voters see the season.

Steele has edge rusher Jackson making the Second Team All-Pac-12. In 2021 Jackson had 46 total tackles, five sacks, one forced fumble, and one interception.

Jackson was one of the most impactful players on the WSU defense last season. If a big play needed to happen in the back-field or at the line Jackson was usually involved in the play. I do not believe that he is a lock to finish First Team or Second Team All-Pac-12, but if he is able to uptick his production by ten tackles or so and add a sack or two then he will finish where Steele placed him.

Marsh was an All-Pac-12 Honorable Mention last season. He was ranked with the seventh-best cornerback coverage grade in the Pac-12 by PFF and was the Pac-12 defensive player of the week during the Apple Cup finishing with five tackles, two picks, and one touchdown.

Marsh finished third on the team with 70 total tackles, had two forced fumbles, four passes defended and three interceptions. Marsh will try to step into Jaylen Watson’s role as the team’s number one cornerback. He will have to be a bit more of a ball-hawk to be able to nab an All-Pac-12 selection, and with new competition coming into WSU at cornerback, Marsh will have to fight in camp for snaps. All-Pac-12 could happen for Marsh and is a logical landing spot for Marsh.

Since Stribling flashed his freshman year it shows promise of him becoming a great receiver for WSU, with Cam Ward under center he is more accurate than Jayden de Laura and this could give Stribling better receiving options. Expect a raise in Stribling’s production, he is a big-bodied receiver that can grab jump balls and run good routes.

Steele has him on the All-Pac-12 Third Team, I think it is likely he is an Honorable Mention in 2022 but his play could be elevated to a strong Second Team candidate with the addition of Ward.

Australian punter Haberer was selected on Steele’s Preseason All-Pac-12 Third Team. Haberer like Stribling was a freshman last year, he was selected to the 2021 FWAA Freshman All-American Team. He was the first WSU player to be selected to that since 2016. Haberer has potential to be a good punter, last season he was tied for second in the Pac-12 with 28 punts fair caught.

Haberer averaged 42.8 yards per punt in the 2021 season, which ranked dead last in the Pac-12 almost 7 yards behind the highest average in 49.2 yards per punt by Arizona punter Kyle Ostendorp. Haberer will not make the All-Pac-12 First or Second Team if any of this continues, he can improve as a punter and add distance to his punts, but he will either be an All-Pac-12 Honorable Mention or not rewarded at all if his production is similar to his freshman year.

For Phil Steele’s Preseason Pac-12 Fourth Team he selected wide receiver Bell. He is entering his sixth and final season of college football. He missed the entirety of the 2021 season and the last time he played he caught 33 passes for 337 yards and two touchdowns.

Bell does not seem like he does enough to be mentioned in the All-Pac-12 conversation, but he has been recognized by Phil Steele multiple times, who ranked him as All-Pac-12 Second Team in 2020 and was a Preseason Honorable Mention in 2021. Unless Bell takes the reigns as the absolute number one receiver on this offense he will just be another wide receiver in the Pac-12. The best possible outcome for Bell unless he completely destroys is an All-Pac-12 Honorable Mention.

Daiyan Henley the transfer linebacker from Nevada was named as a Preseason Pac-12 Fourth Team selection by Steele. Henley comes in to WSU with a great 2021 with Nevada, he had 103 tackles, three for a loss, four interceptions, three fumble recoveries, four passes broken up, and was All-Mountain West Conference Second Team.

Henley is being massively underrated by Steele here. Henley should come into WSU and fit perfectly in the defense being the field general and edge to edge tackler he is. He is taking the job from Jahad Woods and is much more athletic and quicker. Henley will immediately contribute to the WSU defense and could make All-Pac-12 Second Team if he puts up numbers similar to what he did last season.

There are a couple of players on the Cougs that Phil Steele missed that could make it to the All-Pac-12 Team.

Cam Ward is one of the players that Steele missed. Ward is a quarterback coming in from Incarnate Word and just threw for 4,648 yards with 47 touchdowns and only 10 interceptions. Although the competition level is higher in the FBS, if Ward has success similar to this in any manner he will compete with USC’s Caleb Williams, Oregon’s Bo Nix, and UCLA’s Dorian Thompson-Robinson for All-Pac-12 First and Second Team.

Junior wide receiver Lincoln Victor is likely to have a breakout season this year. In 2021 he was an All-Pac-12 Honorable Mention as an all-purpose player. He was very important on special teams with eight tackles and had 22 catches for 295 yards and two touchdowns.

Victor had an explosive spring game leading the team with six grabs 96 yards and two touchdowns. If Ward and Victor continue to have a connection like this during the season it is not out of reach for Victor to be All-Pac-12 Second Team.

The final player that could make the All-Pac-12 Team is Jordan Lee, the transfer safety from Nevada. Lee was an All-Mountain West Conference Honorable Mention. He was third on the team with 86 total tackles had four pass breakups, five fumble recoveries, and four forced fumbles.

If Lee gets a few more tackles and more pass breakups Lee could push the Pac-12 defensive backs and become an All-Pac-12 Honorable Mention for his senior year.