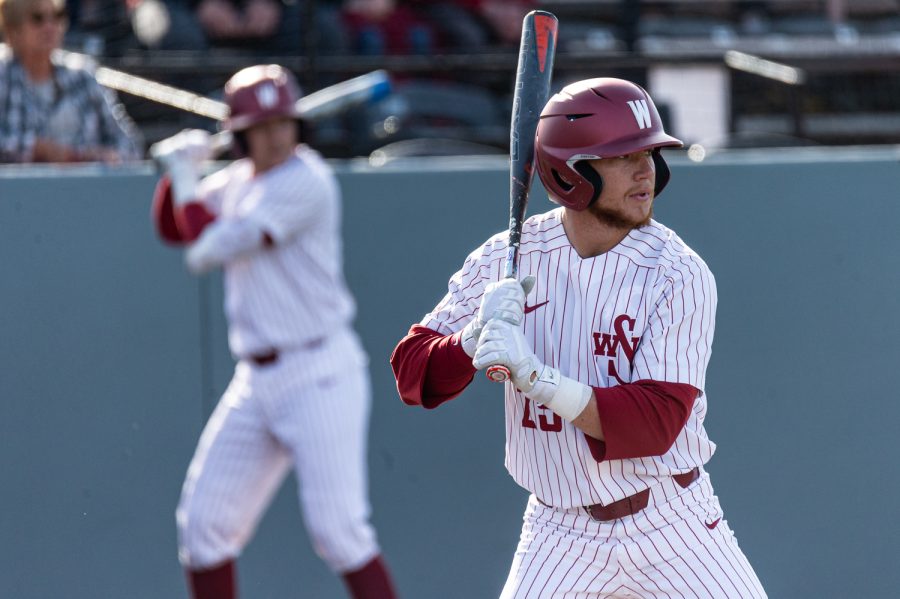 WSU baseball had a tough stretch of games in March and early April against Pac-12 conference opponents but it was agaisnt the then-ranked No. 10 Oregon Ducks, where WSU found their winning ways.

The Cougs won two of the three games including the final game of the series which was a nail-biting 8-7 victory for the Cougs in 10 innings.

Pitching for WSU was Duke Brotherton who put in three innings of work with two strikeouts and one hit allowed. McKabe Cottrell pitched just over one inning in the game and gave up six runs on three hits and two walks. Caden Kaelber earned the save for WSU after getting a strikeout in his one inning of action.

Jack Smith singled right after Bryce Matthews and Jack Smith singled to put two runners on base, however, the next two batters got out and Matthews and Smith were stranded. The Ducks started the first inning with a one-out walk, then a double to put runners on second and third with one out. After an RBI single from the Ducks the next batter grounded into a double play to minimize the damage, but the Ducks led 1-0 heading into the second.

The WSU batters got a quick three-up three-down on seven pitches to go back on defense, where the Cougs struggled. WSU gave up five earned runs in the second inning. The first two Duck batters reached base on a walk and a hit-by-pitch, then after a flyout the next two batters got hit once again, scoring one run. The next Duck batter then had a bases-clearing triple to score three runs. After a fielder’s choice RBI and a flyout, the Ducks now lead 6-0 after two innings.

WSU still could not produce any offensive action as they had another three-up three-down inning, but only held the Ducks to one hit in the third. The Ducks left two runners on base in the inning from a walk and wild pitch.

Justin Van De Brake singled in the top of the fourth but was stranded as Elijah Hainline struck out to end the inning. After a leadoff walk for Oregon, the Cougs pitching retired the next three batters to keep the score 6-0.

The fifth inning was a three-up three-down for both WSU and Oregon as they both could not find a base runner heading into the sixth inning where the Cougs finally got on the board.

Kolden started the inning with a single which was followed by a strikeout from Matthews. Smith singled to advance Kolden to second and Jacob McKeon had a sacrifice fly out advancing Kolden to third who then scored the next at bat from an RBI single from Van De Brake. Hainline had a two-RBI double to cut the Ducks’ score in half at 6-3. Oregon got one run in the bottom of the sixth with an RBI single with one out, but the next two batters were retired and Oregon stranded two on base.

The only highlight of the top of the seventh was a walk from Kyle Russell, but he was the only base runner for the Cougs. The WSU pitching managed a three-up three-down inning to keep the score 7-3.

Smith led off the eighth inning with a double that was followed by a two-run homer from McKeon to cut the lead 7-5 after the inning ended with three straight outs from the WSU offense. The Cougs’ defense stood tall and forced a three-up three-down inning heading into the ninth.

After a one-out single from Russell, Kolden walked to put two runners on. Matthews then had an RBI single and advanced Kolden to third with one out. Smith hit a sacrifice fly to score Kolden and tie the game at seven heading into the bottom of the ninth. After a two-out single from the Ducks, the runner was out at second and the game headed into the 10th inning tied at seven.

In the 10th inning, the Cougs had the bases loaded after Van De Brake singled, Will Cresswell reached base after being hit hit by a pitch and Montez walked. With two outs in the 10th, Kolden walked, scoring Van De Brake and giving WSU the 8-7 lead. In the bottom of the inning the Cougs got a three-up three-down inning to end the game and earn the 8-7 victory.

This win and series win was WSU’s second series win against conference opponents on the season with the other against then-ranked No. 9 Arizona Wildcats.