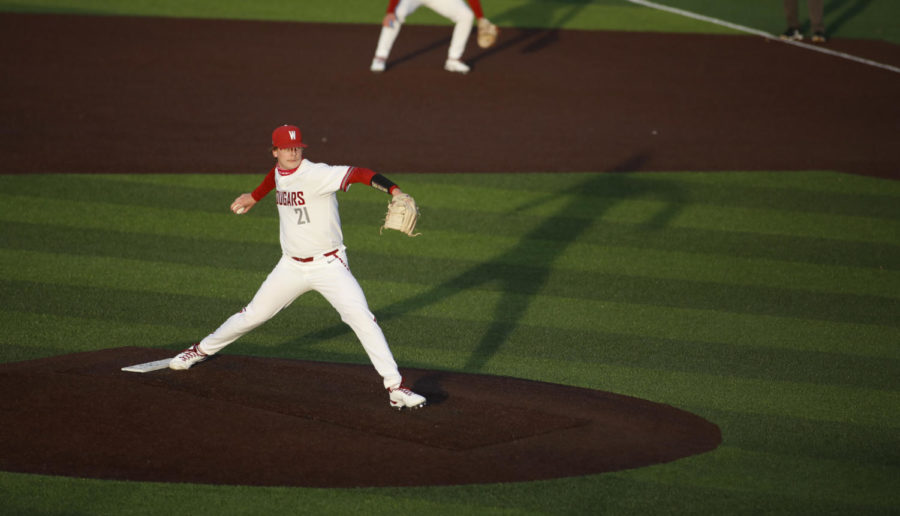 Junior pitcher Zane Mills pitches against Seattle U Friday evening at Bailey-Brayton Field. The Cougars walk away with a 2-1 series win over the Redhawks.

During the baseball offseason, many athletes elect to either take some time off or have light practices to sharpen their skills. Others elect to keep competing and join local summer baseball teams to continue to play throughout the summer.

The Bellingham Bells based in Bellingham, Wash. have four Cougs on their team: Cooper Barnum, Will Cresswell, Elijah Hainline and Elias Farland. Barnum has pitched in three games so far and has earned one win and two no-decisions. He’s given up one run on 10 hits with six strikeouts.

Duke Brotherton is pitching for the Corvallis Knights and was named West Coast League’s Moss Adams Pitcher of the Week for his one hit allowed in five innings of work.

Louie Albrecht plays Catcher for the Cowlitz Black Bears who, as of Sunday, are 10-11 overall.

Cameron Liss and Jacob McKeon are spending their summer in Canada playing for the Edmonton Riverhawks. The Riverhawks, as of Sunday, were 9-14 overall.

The Portland Pickles have four Cougs playing for them this offseason: Kolby Kmetko, Drake Anderson, Keith Jones II and Kyler Stancato. The Pickles, as of Sunday, were 10-6 overall in the West Coast League. Stancato has appeared in 13 games for the Pickles and has 11 hits and two RBIs with a homer. Anderson has appeared in nine games and has 10 hits and four RBIs. Jones II has 11 appearances so far for the Pickles and 12 hits with eight RBIs.

Tyler Hoeft pitches for the Walla Walla Sweets.  The Sweets as of Sunday were 9-9 overall. Hoeft has appeared in three games so far this season. He has an 0-1 record with seven innings pitched for 15 runs allowed as well as giving up 13 hits. Hoeft also has 12 strikeouts and has walked 10 batters in his three games.

The West Coast League is well represented by WSU baseball players during the summer season. There are also a few former Cougs who are competing in the baseball minor leagues.

First is Kyle Manzardo. Manzardo was drafted in the second round with the 63rd pick in the 2021 MLB draft by the Tampa Bay Rays and currently plays for the Bowling Green Hot Rods, an affiliate of the Tampa Bay Rays. In 2022, Manzardo sports a .310 batting average.

In 129 total at-bats Manzardo has 40 hits and nine homers for 27 RBIs. He also has 21 walks and has been struck out 26 times this season. Earlier this season Manzardo was on a homer tear, he had three home runs in four games in early June.

The other former Coug who is producing in the minors is Zane Mills. Mills was drafted in the fourth round with the 120th pick of the 2021 MLB draft by the St. Louis Cardinals. He currently plays for the Cardinals Arizona League affiliate, the Peoria Chiefs.

Mills pitched seven innings in one game, the furthest any Chiefs starting pitcher had gone this season. In that game, Mills had three strikeouts and four hits for one run in his seven innings. Mills has a 2-5 record so far in 2022, he also played a few games for single-A team Palm Beach Cardinals. In his seven games across both teams, he has 62 innings pitched.

WSU baseball players competing for their respective summer teams and having success early in June is a testament to the exceptional program being put together by Brian Green and the rest of the WSU staff. The Cougs will look to use the summer to sharpen their skills on the field on their quest to reach their first Pac-12 baseball tournament next season.