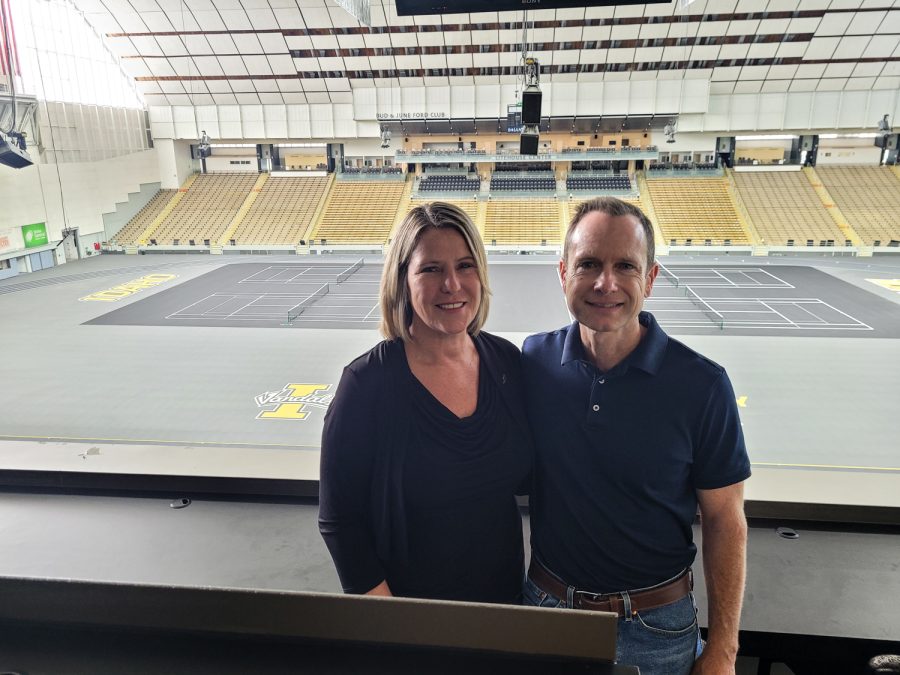 Jill and Matt McCluskey pose in front of the Lauren McCluskey Track on July 14 in the Kibbie Dome.

University of Idaho finished resurfacing its indoor track in honor of Lauren McCluskey, who grew up in Pullman and trained at the Kibbie Dome since she was 10 years old.

Four years ago, Lauren was murdered by a man she briefly dated during her senior year at University of Utah. Despite working with city and campus police departments, housing and counseling, Lauren did not receive urgent help to keep her safe from the man who stalked her, said Jill McCluskey, her mother and School of Economic Sciences regents professor and director at WSU.

To honor Lauren’s home track, where she trained during the wintertime and learned from Olympic athletes like Andrew Blaser, Jill and her husband Matt donated $1 million to resurface UI’s track in the Kibbie Dome, Jill said. The track was completed on July 14.

“We hope that it helps people to remember who Lauren was and how she lived and also what happened to her,” Jill said.  “I think it can help be a reminder to people who can help in these kinds of situations. She’ll always have a presence there at the track.”

Jill said Lauren’s athletic ability was apparent from the moment she began to walk when she was 9 months old.

When she was 8 years old, Lauren set records in all three of her events at the USATF National Junior Olympic Track and Field Championships in Spokane. She competed in nationals two years in a row after that, winning second place in the high jump event at the age of 10, Jill said. She was also a state champion in the high jump in her freshman year at Pullman High School.

Lauren loved the high jump because she said it felt like flying, Jill said.

After Lauren’s death, Jill created Lauren’s Promise, a vow to listen to individuals experiencing dating violence and connect them with resources. At least one faculty member at nearly 200 universities around the world has made Lauren’s Promise, she said.

Lauren’s legacy lives on in the centerpiece of UI’s new 280-meter flat track. Her name is the largest logo integrated into a track and field system, according to a UI press release.

“It just made us happy,” Jill said. “I didn’t expect it to be so big, and it was just beautiful.”

New drone pics of the #LaurenMcCluskey track. @uidaho's Kibbie Dome has a seating capacity of 16,000, which to my knowledge makes it the largest for an indoor track in the US. #ForLauren pic.twitter.com/h7SYUy3UVM

Tim Mooney, UI deputy athletic director, said the new track will help improve experiences for student-athletes and fans with its high-quality material that was manufactured and shipped from Italy. Athletes use the Mondotrack Super X 720 surface in elite competitions around the world.

“We’re going to help every student, every sport, have as great a student-athlete experience as they can,” he said.

The track will debut on Jan. 20-21 at the Lauren McCluskey Invite, Jill said. She hopes the invitational will attract professional athletes and universities, like the University of Utah, and set new record times for the facility. Mooney said faster times are expected with the new, “high-performance” track.

“We’re going to try to make it one of the best invitationals around in the Northwest,” Mooney said. “Being a great surface to run on, we think teams can come here and break records. We’re honoring Lauren, we’re opening her track, the meet carries her name — we want to do the very best we can.”

UI was also selected to host next year’s Big Sky Conference championships for men’s and women’s indoor track and field in February, bringing every school in its conference to the Kibbie Dome, Mooney said.

“It’s great for our community, to bring the championship to the Moscow-Pullman area,” he said.

In addition to a seating capacity of 16,000, the Lauren McCluskey Track also has four tennis courts with a Mondotrack 10 surface. The material is covered with an acrylic surface, providing good conditions for tennis balls’ traction, bounce and spin, Mooney said.

Although the Kibbie Dome had tennis courts before the resurfacing, UI reorganized and redesigned them, including a removable curtain around the courts, Mooney said. This allows the tennis and track and field teams to practice simultaneously.

A new track and tennis courts have been installed in the Kibbie Dome and they are named in honor of Lauren McCluskey. Read more and take a look at the construction process for the new surface here. https://t.co/uPtZ31UYlE pic.twitter.com/6gzbuJvWfv

As a multi-use facility for soccer, football, track and field, tennis and recreation teams, the indoor track is necessary for all sports during inclement weather on the Palouse, said Terry Gawlik, UI director of athletics.

“[The fact that we’re able to] convert it, that’s what makes the Kibbie Dome so special,” she said. “Especially when the weather is not conducive to what we all want it to be.”

Since last week – one day after the track was completed – the track has been covered with turf for UI’s football and soccer season, Gawlik said.

The turf will be removed in December and remain uncovered through spring break, Mooney said.

Throughout the winter season, he said UI will continue to remember Lauren’s story and her connection to coaches and athletes in track and field.

“Because that was such an important part of her life, that was an opportunity to honor her,” he said. “We know she loved track and loved Kibbie Dome. It was just a wonderful story to help honor Lauren.”