Air quality worsens on the Palouse 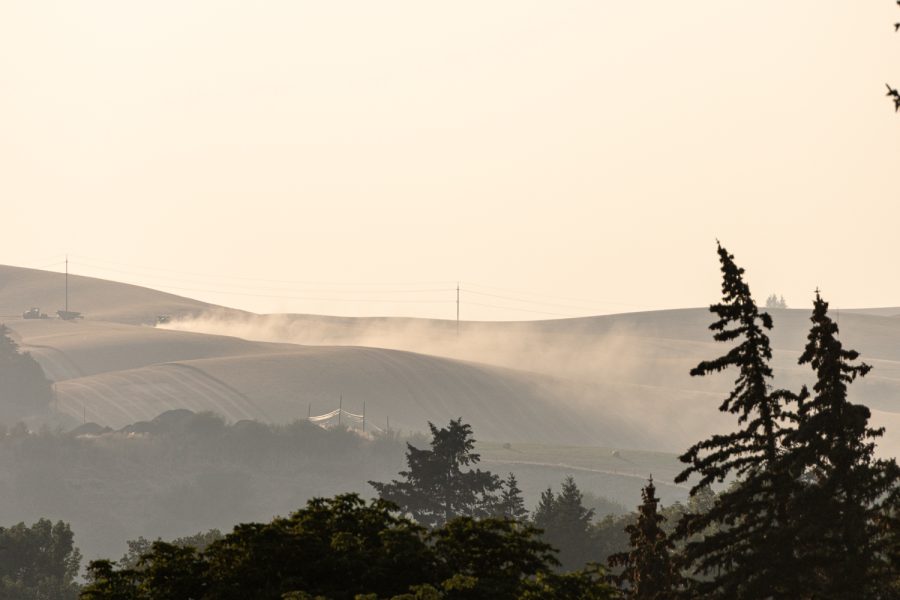 In Pullman, smoke is expected to clear Monday at noon.

As wildfires spread across the Northwest, the air quality in Pullman reached a high of 197 AQI Sunday, according to the Air Quality Index from the Washington State Department of Ecology.

Air quality levels are a quarter higher than they were last week, peaking at 144 AQI on Tuesday.  The smoke is expected to stay until Monday at noon, according to the Weather Channel.

Wildfires continue to rage on across Washington and Idaho, with 1,283 acres in Washington state burned so far this month, according to the Washington State Department of Natural Resources wildfire dashboard.

Evacuation orders are in place for residents of Orogrande, Idaho, according to a recent announcement.

The Williams Creek fire, happening 5 miles west of the town, was sized at 12,000 acres on Friday with 0% containment. It resulted in damage to structures and vegetation in the surrounding area, causing safety hazards from downed power lines and collapsed trees, according to a local report.

Other fires nearby, including the Jones Creek and Double Creek fires, have covered the Snake River Canyon in smoke. While there is no immediate threat to travelers on the river as of Friday, users are advised to keep updated on both fires, according to a Moscow-Pullman Daily News article.

In Latah County, the Prospect fire is 15% contained at almost 300 acres as of Friday. Fire crews from the Idaho Department of Lands searched for hot spots using a drone with an infrared camera, according to Pullman Radio. One hundred forty-two personnel from the department are working on containing the fire, and officials advise the public to avoid the fire zone.

In the west, the Bolt Creek fire, sized at 7,600 acres, caused a mandatory Level 3 evacuation of 400 homes between Index and Skykomish on Saturday, according to the Northwest Interagency Coordination Center. The fire rained ash across Western Washington, and the haze was expected to stay throughout the rest of Sunday.

An 18-mile stretch of Highway 2, which includes the town of Skykomish, was completely blocked off by first responders to prevent the fire from reaching the highway and allow quick access for first responders, according to the Spokesman-Review. Both Stevens Pass and White Pass are also closed due to wildfires.