Author considers the effect of technology on human identity 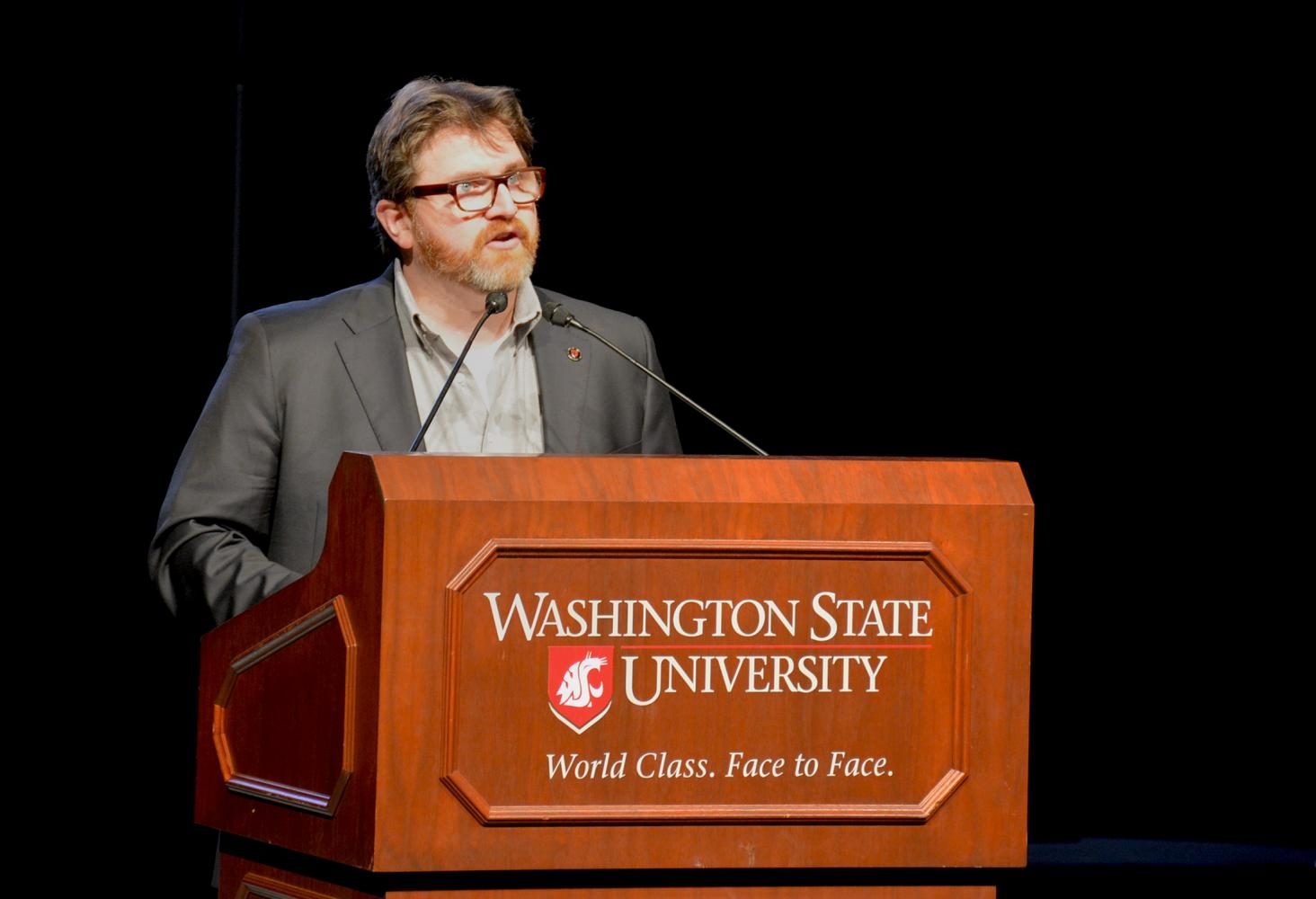 Ernest Cline, author of the scientific novel “Ready Player One,” speaks about his childhood, imagination and an upcoming movie directed by Steven Spielberg.

Before author Ernest Cline’s lecture Monday night at Beasley Coliseum, the PA system burst with an array of buzzy synth music, from artists like Thomas Dolby and Pat Benatar. The playlist served as a nod to the ’80s pop culture woven throughout Cline’s debut novel.

“Ready Player One,” WSU’s Common Reading for 2017, combines past nostalgia and a dystopian future wracked with poverty and misery. Technology is their only escape, and the characters find themselves entrenched in virtual reality nearly every waking moment.

So what was Cline’s purpose in writing a novel with such a dismal view of the future? Why all the ‘80s pop culture references? And, most of all, why was this book chosen for 2017, and what should students gain from reading this novel?

Susan Poch, co-director of WSU Common Reading, gave some answers with her introduction. The book was chosen, she said, to encourage students to “think critically and differently” as well as start a dialogue about the evolution of technology. But she soon stepped aside to let Cline take the podium.

Cline spoke with all the enthusiasm that could be expected of an author whose movie adaptation has been picked up by Steven Spielberg. When he got particularly excited, he’d adjust his dark-rimmed glasses (this happened no less than 133 times; I counted).

He was inspired to include pop culture in his novel, he said, as a “powerful connecting force.” This all came after a screenplay of his was altered beyond his preference, and he decided to write a novel as a way to “geek out directly with the reader,” rather than risk these elements being lost in translation.

Cline found that “anything you can imagine, you can throw into the story.” Thus, “Ready Player One” became a way to share his own passion for ’80s culture, while also using it to connect readers with shared interests.

As for the dystopian aspect, Cline again referenced pop culture while making a case for the many sides of technology. He explained that virtual reality, like reading a book or listening to an album, “provides a little escape for a few hours.” He stressed that the novel shows “both the promise and the peril with this technology.”

“Above all, I want for them to enjoy the story,” he wrote in an email, “but I hope the book also prompts them to consider the effects of our ongoing relationship with our own technology and its influence on human identity.”

Anna Young is a freshman creative writing major from Helena, Montana. She can be contacted at mint@dailyevergreen.com.