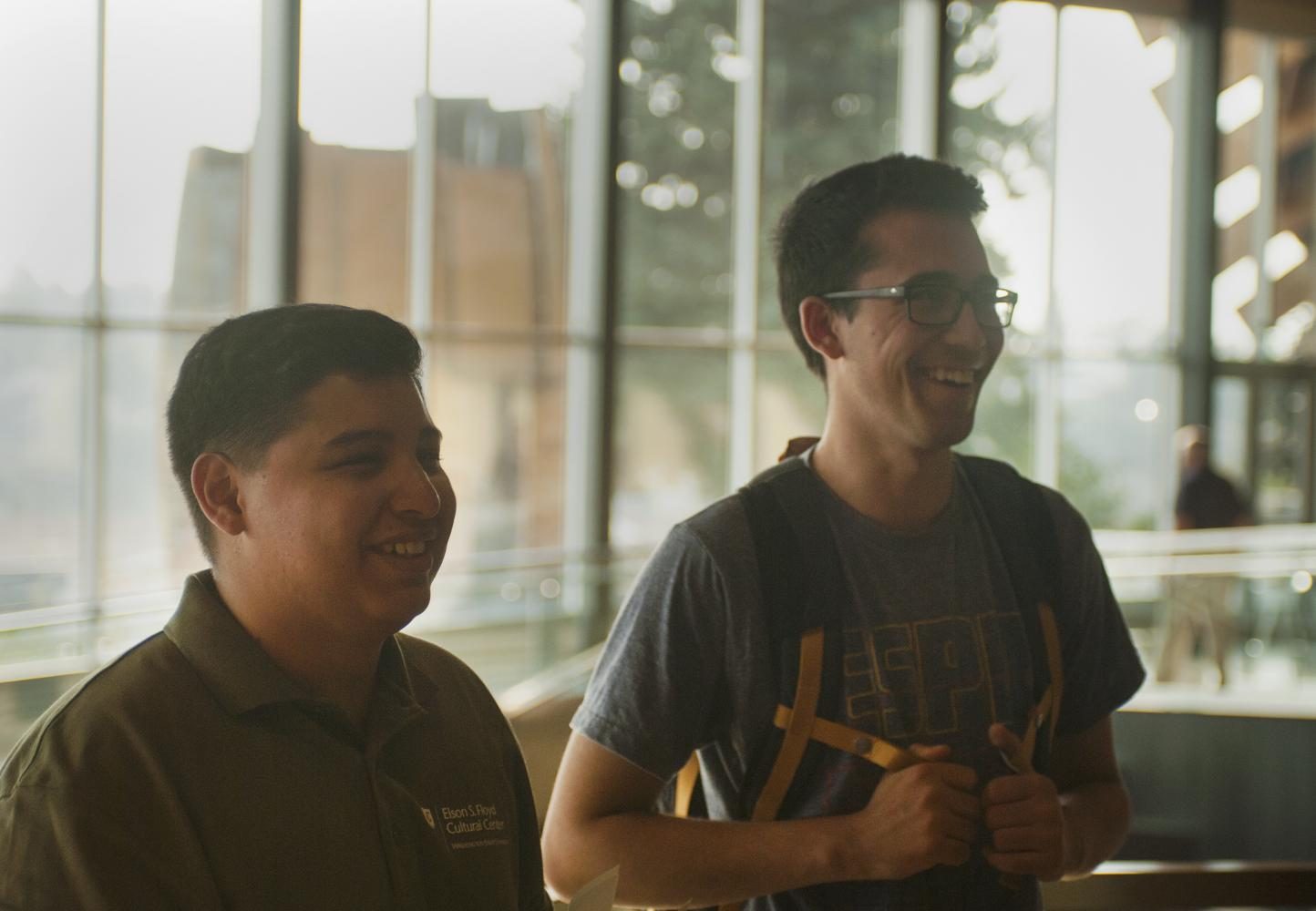 Harald Hyllseth and Josue Zuniga discuss the potential for the new Elson S. Floyd Cultural Center to be a hub for different student organizations during an open house on Tuesday, August 29th from 5-7:00 PM. He sees it as a common space to hold cultural events as well as hang out and talk with other students in a unique environment.

Doors to the newly completed Elson S. Floyd Cultural Center are wide open for student organization leaders to have a look at the new space.

Griffin Uchida, Assistant Director of Facilities and Operations for the CUB and the Cultural Center, said he hopes the new building becomes a popular event space for as many student organizations as possible.

“An open house is a good way for the groups who we anticipate to be repeat users to get a sense of it,” Uchida said.

Few students shuffled through in the late afternoon Tuesday during the open house hours. Attendance was a bit higher Wednesday night but still significantly below the center’s capacity. In total, about 35 visitors attended the two-night open houses.

Amanda Kirby, who works in the center, was optimistic that it would draw more students as the semester went on. She said the recent completion of the building, restricted parking, Stubby Tuesdays, student organization meetings elsewhere and other campus events all could have had an effect on the amount of early visitors.

“There is a lot going on right now,” the senior studying Agricultural Economics said. “I don’t think people are really focusing on the building.”

Kirby, who is president of the Voiland College’s Developing Sustainable Communities organization, said the university’s efforts toward diversity were refreshing and that the cultural center is in a good location for clubs like hers, which revolve around the south side of campus.
“This side of campus does not have a lot of meeting spaces,” she said.

“This is more impressive than any building on campus,” Fanning said. “I would be very pleased to have a meeting here.”
He particularly praised the unique design of the building and the environmentally friendly aspects, like the use of natural light and locally sourced wood, though he said he would have liked to see more separation of trash and recycling. Fanning also admitted he was drawn after reading about the free food in the email invitation.

Harald Hyllseth, a junior majoring in communication, said he was saddened he did not have the opportunity to be a student during Floyd’s presidency, but he views the late president fondly. Hyllseth said the new cultural center reflected Floyd’s legacy.

“I could definitely see this working out a lot for groups who want to throw large events here,” he said. “People can feel safe and welcome and willing to share cultures with each other.”

Referencing his own Filipino and Native American background, Hyllseth said he was very happy to see a building entirely devoted to culture.

“I don’t think people build it up enough that WSU has a huge multicultural group of students,” he said. “It is really cool to see a place like WSU embrace it.”

Hyllseth took two chicken skewers with him when he left the building, but many remained.
So far, Kirby said, the building has drawn more curious faculty than students, but she expects that to change as the CUB takes on more group meetings.

“I am scheduling all my meetings here,” she said.

However, Kirby said, the building’s quietness has made it one of her favorite places to do her homework.

“[The center] is gorgeous, honestly,” she said. “I think this place will fill up.”