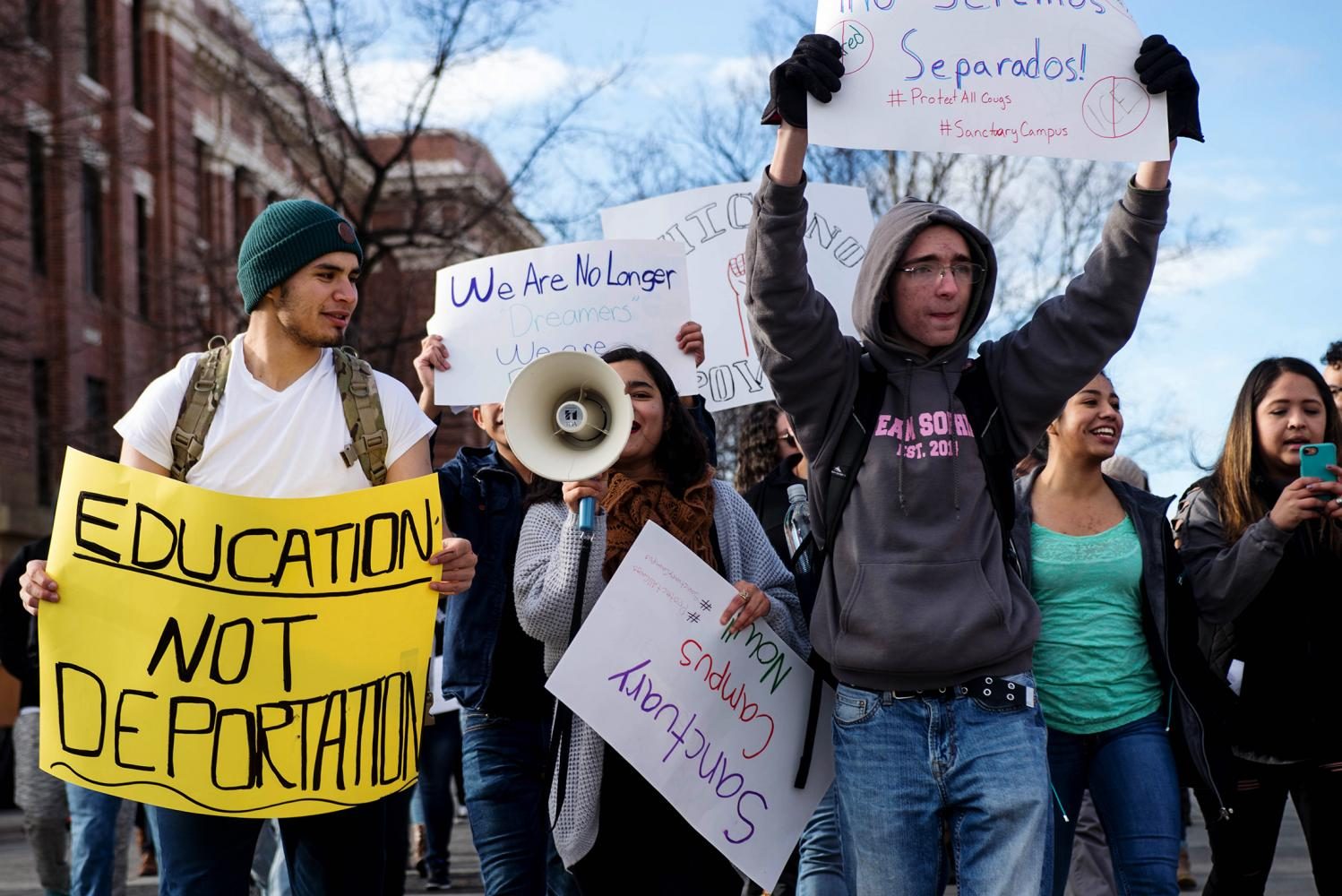 From left to right: Eduardo Castañeda Díaz, Keyla Palominos and Michael Young-Bolton hold an "education, not deportation" sign at a protest December 1, 2016.

In their statement, the university presidents expressed disappointment in the Trump administration’s decision, saying it would “rob” the country of “gifted, hardworking and dedicated young people.”

Phil Weiler, WSU’s vice president for marketing and communications, said it is hard to know exactly how many students and employees this will affect, because they are not required to share their immigration status with the university. Weiler estimated there are several hundred DACA recipients across all of WSU’s systems.

As a land-grant university, he said, access to education is one of WSU’s most important principles, regardless of where a student comes from.

“These are the students we were created to serve,” Weiler said, “these underrepresented populations.”

He said there was not much the university could do at this point to prevent full DACA repeal, but the joint statement — which also included endorsements from about 40 Washington college presidents — sent a strong message to the public and elected officials.

“We absolutely will be making our voice heard with our elected officials,” Weiler said, noting that protection of DACA students from deportation will likely require action from Congress. “I think there is value in having people make it very clear what their position is on this so that members of Congress understand that this is an issue of high importance across the country.”

Weiler said he is “cautiously hopeful” for a legislative fix, saying he thinks the high public profile of the issue will force elected officials’ hands in taking action.

Manuel Acevedo, director of Multicultural Student Services, said he was hurt upon hearing about the planned DACA repeal.

“I think we are witnessing, in many ways, a human tragedy,” Acevedo said.

However, he thought the university has done a good job supporting undocumented students so far, through programs like seminars intended to help faculty and staff learn how to work with undocumented students. Acevedo said the University of Idaho College of Law Immigration Clinic would meet with students Tuesday night to help them better understand the legal implications of DACA repeal.

“Our team is ready to talk to the students, engage with them, refer them to [resources] on campus and off campus,” he said. “We especially want them to know that we care about them and they are a part of our community.”

Acevedo said it is the university’s responsibility to meet the different challenges facing all students and to create a welcoming environment in which they can learn.

Andrea Chavez, member of the minority advocacy student group Unity @ WSU/SPLC on Campus, said she was skeptical of how hard the university would push for substantive change.

“I think [Schulz’s] proclamations are in the right direction,” Chavez said, “but I don’t see a lot of action on those things he is saying.”

The senior, double majoring in psychology and human development, said the university administration could take more action to protect certain populations from being singled out. A Mexican-born American citizen herself, Chavez said events on campus and the broader political climate have made people of minority backgrounds feel tenser.

“I hope people that want to take the color-blind approach try to rethink that decision,” Chavez said, “and get more involved and try to understand the other side.”