Circus of a season centers on Clowney 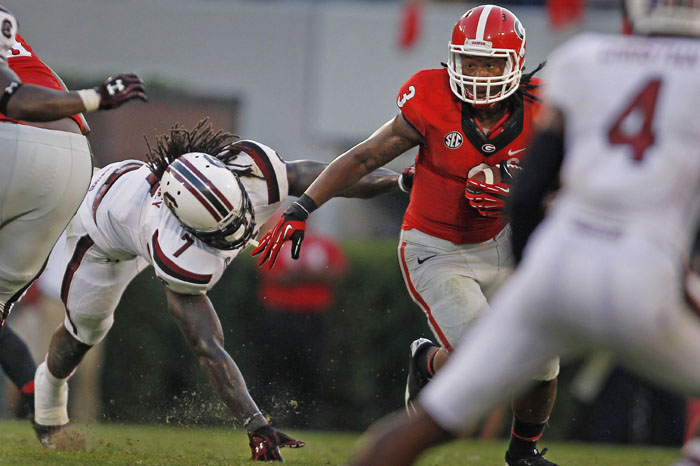 Each day for eleven weeks, Jadeveon Clowney woke up and turned on the TV to relive the same bone crushing hit again and again.

Clowney’s hit was voted best-of-the-best play on ESPN for 45 straight days. The play occurred during the University of South Carolina’s trip to the Capital One Bowl against Michigan in January when Clowney, a sophomore at the time, broke through the Michigan offensive line to create a car crash-esque collision with the Wolverine running back.

The hit was amazing and warranted plenty of awe from football fanatics, however, Clowney is not the best defensive player to come through the collegiate football circuit.

With one play, he transitioned from being a respectable defensive end to a form of The Incredible Hulk. Unfortunately, the media turned Clowney’s moment into an offseason of expectations.

To go along with his 45-day dominance of ESPN’s airwaves, Clowney was heralded by many football experts as the favorite to be taken No. 1 overall in the 2014 NFL Draft.

That expectation is now crashing down, and after two weeks of football, South Carolina would be better off if Clowney didn’t set foot on their football field.

Entering the 2013 season, he had 90 solo and assisted tackles, 35 tackles for a loss, 21 sacks, and eight forced fumbles, according to sports-reference.com. These are all solid numbers for a collegiate junior, but the hit witnessed nationwide definitely made football analysts and fans overrate Clowney’s defensive prowess.

To say he is an awful player would be an exaggeration, however, to say he’s the best to come through Division-I collegiate football is absurd.

Some people don’t like to focus on numbers, so let’s focus on how he’s handled poor performance to start the 2013 college football season, something NFL scouts are definitely keeping a close eye on.

ESPN reported Clowney as “frustrated” with his first two games this season. This is understandable considering he was on the preseason Heisman watch list. His performances against North Carolina and Georgia were average, but the media seems to be spinning them to be awful efforts.

It isn’t awful that Clowney only recorded six tackles and one sack during the first two weeks of the 2013 season. The biggest red flag is seen when looking at his comments postgame against Georgia.

“I told the coaches you got to put me somewhere else — in the middle if you want to — somewhere I can make some plays (to) help my team get in position to win. But (Georgia) took me right out of the game,” Clowney said in an ESPN interview.

He told the coaches? When was the last time it was any player’s job to tell the coach how he should be played? Clowney then continued to talk about the ball moving away from him. For Gamecock fans, the most annoying part of Clowney’s circus has to be his childish and selfish reaction to some early season adversity. He’s more concerned about himself and how he can affect the game than how his team can work together to win on the defensive side of the football.

Clowney’s one-dimensional mindset shines through on the stat sheet as well. According to ESPN, when Clowney is on the field, South Carolina’s defense gives up 8.3 yards per play and has allowed 17 plays for 10 or more yards. While Clowney is on the bench, the Gamecocks allow 2.8 yards per play and have only allowed two plays for more than 10 yards.

Clowney’s negative energy has also created a divide between his own team. During Saturday’s loss to Georgia, two South Carolina defensive coordinators had to be pulled away from each other on the Gamecock’s sideline. They were in the middle of a verbal and physical altercation that would embarrass most college football teams.

South Carolina’s season could slip away if an attitude adjustment isn’t made in the Gamecock locker room. It starts with Clowney. If his season stats can’t be ultra-impressive, this is his chance to prove to NFL scouts that he can be a team leader. Otherwise, his time will be best served complaining somewhere else.