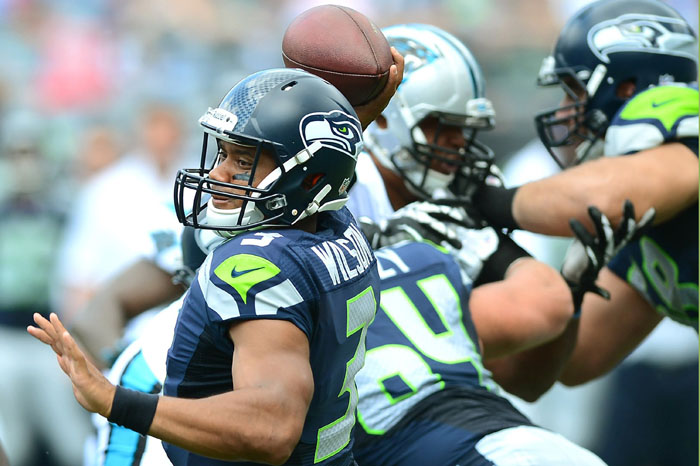 Seattle Seahawks quarterback Russell Wilson drops back to pass during first-quarter action against the Carolina Panthers at Bank of America Stadium in Charlotte, North Carolina, on Sunday, September 8, 2013. Seattle won, 12-7.

The San Francisco 49ers and the Seattle Seahawks are two of the strongest teams in the NFC conference and play in the same division. The two are strong enough, in fact, that one of these two teams could be the Super Bowl representative.

The 49ers have a slight advantage over the Seahawks. Here is how the two stack up against one another:

Quarterback play –Colin Kaepernick appears to be an arrogant media spectacle, but he brings a ton to the table in this offense. Kaepernick has tremendous talent in a wide array of areas. He is equipped with a tremendously strong arm and can also beat opposing defenses with his legs. With the read-option offense skyrocketing in popularity last season due to the increase in young, athletic quarterbacks, nobody ran it better than Kaepernick. He will spend most of his time making plays both running and throwing, leading to multiple bicep kisses.

Receiver additions – With Mario Manningham and Michael Crabtree out, the Niners had some shoes that needed filling. Those shoes were addressed in the offseason.

San Fran brought in veteran pro bowler Anquan Boldin, a huge presence who should be Kaepernick’s safety blanket on third down and pose as a red zone threat. Tight end Vernon Davis disappeared last season on the receiving end due to the increased need of run blocking, but he will step up and be the pro bowler he once was. Jonathan Baldwin, the former Kansas City Chiefs’ first round draft pick from 2011, should give the team far more than what 2012 first rounder A.J. Jenkins gave them (which was absolutely nothing).

Ferocious front-seven — The already lethal Niners defense should be even better this season with the return of pro-bowl defensive end Justin Smith. Smith is the ultimate run-stuffer. He is especially good when it comes to stretch plays from opposing offenses by stringing the play out until the runner simply has no more room to turn the corner.

Smith also takes pressure off elite pass-rushing defensive end counterpart Aldon Smith (no relation). Aldon Smith led the team with 19.5 sacks last season, but had none the last six weeks of the season. This came as a result of frequent double teams because Justin Smith was not a threat standing in sweats on the sideline unable to play. Stepping away from the D-line and into the second level, the linebacking group for San Fran is second to none. Led by all-pro Patrick Willis who can tackle, pass rush, run stop, and cover, the team also features Navorro Bowman who led the team with 148 tackles last season, and pass rushing specialist Ahmad Brooks.

Short-handed Secondary — The secondary lost a major piece during the offseason when pro-bowl safety Dashon Goldson went to the Tampa Bay Buccaneers via free agency. San Fran replaced him with 2013 first round pick Eric Reid, who they hope will ultimately be of the same caliber as Goldson. Corners Carlos Rogers and Terrell Brown are quality players, but losing Chris Culliver leaves the team thin at defensive back.

From top to bottom, the San Francisco 49ers are above all. With solid players at every position there is no weakness that pops out on paper. Additionally, this team has had the same core unit of guys who all understand the system and play fluid football.

The Seattle Seahawks are extremely similar to the 49ers in all aspects of the game. The only difference between the two is that Seattle does not execute to the degree San Francisco does, leading to a few obvious weaknesses that will continue into 2013.

Superb Secondary — The Seahawks have hands down the best secondary in football. Cornerbacks Richard Sherman and Brandon Browner are the two biggest and most physical defensive backs in the league and can match up well with anyone. Safeties Earl Thomas III and Cam Chancellor are also quality defensive backs with the ability to cover a lot of ground and lay big hits on receivers. The Hawks are extremely deep in the secondary, including corners Walter Thurmond III, Jeremy Lane and Byron Maxwell, all of whom have the ability start on a number of other teams.

Running game – The Seahawks also have one of the deepest and best running games in the league. Marshawn Lynch is arguably a top three running back in the league with the ability to punish defenders and gain the extra yards.

Anemic pass-rush — Seattle ranked 18th in the league in sacks during the 2012 season, and although the Seahawks have the best secondary in football, The Legion of Boom can only stay with receivers for so long. With defensive end Chris Clemons returning from a torn ACL, Cliff Avril questionable each week and Bruce Irvin suspended the first four games of the season due to violation of the NFL’s drug abuse policy, the pass rush does not seem to be getting any better.

Inability to win on the road — Not every game can be played at Century Link Field, where Seattle went 8-0 last year. The Seahawks had an abysmal road record of 3-5, including losses to weak teams such as the Detroit Lions, Miami Dolphins and Arizona Cardinals. When the mindset in Seattle is Super Bowl or bust, the ability to win on the road will drastically have to improve. The Super Bowl will not be played in Seattle in the foreseeable future, and a wild-card playoff berth does not guarantee a home game.

If the Seahawks can play as big as the mouth on cornerback Richard Sherman, Seattle can be a legitimate threat to San Francisco at the top of the division.