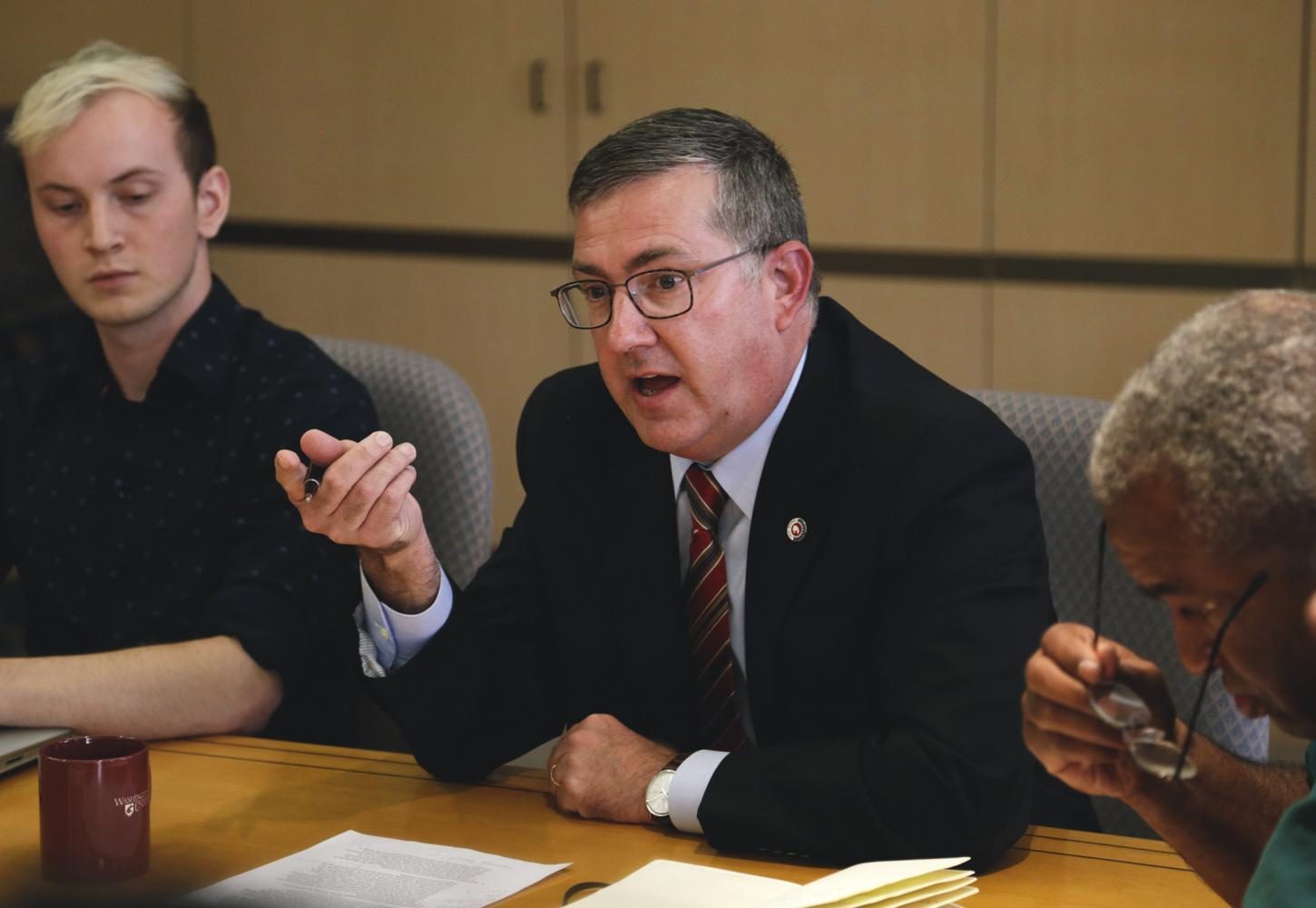 Kirk Shultz addresses assembled students and faculty after hearing student testimonies during the first meeting addressing the Sit In demands.

Two weeks after student activists staged a sit-in demonstration in the French Administration building, university President Kirk Schulz and other university leaders met with them to discuss their demands.

Last week, the sit-in organizers had their first meeting with the administration where they laid out a series of requests on hate speech, cultural competency training, faculty and staff diversity, support for multicultural programs, expansion of gender neutral facilities and free feminine hygiene products. After hearing the students’ concerns, the administration agreed to meet with them again this week to negotiate more concrete courses of action.

Bright and early Saturday morning, the group sat at a square formation of tables, their voices echoing in the main chamber of the Elson S. Floyd Cultural Center.
Differentiating free speech from hate speech has become a flashpoint in recent weeks as some have argued there is no such thing, while others have called on the university to set a policy shielding students from offensive demonstrations.

Lashae Daniels, an organizer of the March Against White Supremacy, pointed to WSU’s abuse, disruption and interference policy, saying hate speech prevention could fall within its boundaries.

The administrators did not explicitly say they would add hate speech provisions to the code, but did explore how the process might work.

Schulz said a policy change would have to be drafted and scrupulously reviewed before being submitted to the Board of Regents for approval or rejection.
In past statements, Schulz has said the university would have a hard time defining hate speech because it has no Constitutional definition, but he has considered how hate speech could relate to policies against harassment.

“Faculty Senate and student Senate should also have input,” said Mary Jo Gonzales, vice president of Student Affairs. “It is dangerous to do this without their input.”

The group concluded that the beginning of next semester would be a reasonable deadline for a draft of a policy addressing hate speech.

Chijioke Emeka, Black Student Union president, led the discussion on mandatory cultural competency training for all faculty, staff and students.
Schulz said there is substantial support for this idea but it would be challenging to implement.

Schulz and Gonzales pointed out that training faculty and staff is logistically more difficult than training students, who could be able to go through the program in big groups during orientation. Faculty and staff, they said, could not be trained en masse, so they would have to take the course online, or it could be combined with another required educational program.

Daniels and Emeka wanted to make sure cultural competency was held to the same standard as Green Dot or Booze, Sex and Reality Checks.

“The possibility of incorporating [cultural competency] in other training might overshadow the importance of this training,” Emeka said.

Gonzales said the administration would partner with students in the coming months to iron out the details and implementation of the program. Training for the students could be in place beginning next academic year, she said.

“This is probably the most difficult of the items you all put on the list,” Schulz said.

Meeting this request, he said, would involve changes to faculty, class content and scheduling.

“I want to make sure we talk about this more,” Schulz said, “because I want to know what would look like a success to you.”

Alejandra Martinez, an advocate for Chicano studies programs, said WSU should aspire to make its cultural studies programs more like the University of California’s Berkeley and Los Angeles campuses.

“The environment in the classes transfer to the campus,” Martinez said.

Schulz said the administration would be open to cooperating with the students to bring their concerns before the Faculty Senate.

Regarding the students’ request to bring in more faculty and staff of color, Schulz said he had received massive amounts of feedback encouraging the university to do so.

“Hiring more faculty and staff of color has become an objective of the ‘Drive to 25,’ ” he said. “This is a university objective.”

The administrators explained the difficulty of this request, as significant change would take years, and only about half of the university’s staff is willing to self-identify their ethnicity when asked. Schulz said the administration would take a look at the demographics of its applicants.

The students’ final request was to expand the availability of free feminine hygiene products and more gender-neutral facilities across campus.

Schulz said the university would have to look at how much it spends on feminine hygiene products currently and how much it would cost to provide more of them for free.

On gender-neutral bathrooms, Brandon Townsend, the Gender and Sexuality Alliance’s secretary, said the campus needs more multi-stall facilities, like in the Chinook Student Center, rather than scattered single-stall bathrooms.

“Gender-neutral facilities need to be in all new buildings that come in,” Schulz said. “It is a core part of any new construction that goes on.”

To wrap up the meeting, the students requested Schulz, Provost Dan Bernardo and other senior administration issue a statement by the end of the week supporting students of color and their allies.

“I feel like sometimes these statements tip-toe around the issues,” she said. “This is an opportunity to show you really support us.”

Administrators agreed to work with the students when drafting the statement.

“I would be happy to sign this,” Schulz said.