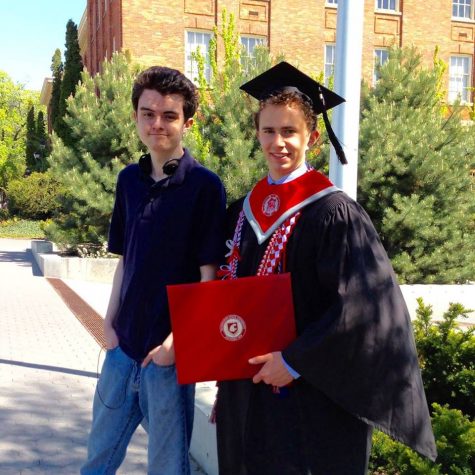 COURTESY OF LEANNE DEVITT Conor Devitt and Jesse Devitt pose at Conor’s graduation in May 2015.

When Matt Benoit visited Conor Devitt at his new home in the British Virgin Islands in January, he told Devitt, a WSU graduate, that he was “living in a Corona commercial.” Picturesque beaches, warm waters and ample sunshine seemed like paradise.

Nine months later, Tortola Island is strewn with debris from destroyed businesses and homes left in the wake of Hurricane Irma, a Category 5 hurricane that ripped through the British Virgin Islands last Wednesday.

Devitt updated his Facebook status Monday morning to let loved ones know he was okay: “Irma was insane, but we’re safe.”

His home was destroyed, as was the building of the newspaper for which he works, The BVI Beacon.

Hurricane Irma has killed at least four people in the British Virgin Islands, multiple reports say, and at least 20 in the Caribbean overall, officials have said.

The Daily Evergreen has been unable to speak with Devitt directly due to limited phone service and electricity on the island, but spoke with family and friends close to him.

Devitt was able to obtain cell service when he and others drove to the top of a hill overlooking the British Virgin Islands’ capital city, Road Town, on Saturday morning. He was able to speak for 17 minutes with his mother, Leanne Devitt, before he felt he should hand his phone over to others, she recalled, as his was the only working device among the group.

Conor is with about nine other people, she said, pooling resources so that they have a week’s worth of food and water, and working under the direction of an engineer to begin repairing buildings.

She had been monitoring the situation from afar and sharing social media updates as she came across them, and was relieved to find out he was not in the path of the newly-formed Category 4 Hurricane Jose, which moved past Puerto Rico and away from the Caribbean Islands on Sunday.

“And Jose is headed north! So so so so grateful,” she wrote in a Facebook post. “But continuing to anxiously watch that nasty Irma … these are days beyond comprehension, aren’t they?”

In March 2016, Conor took a new job as a government reporter at The BVI Beacon. He graduated in spring 2015 from WSU’s Edward R. Murrow College of Communication and was promoted to business editor a few months ago.

“He has no idea if he will still have a job, if he can stay there, if he will want to or if he would leave his friends,” Leanne said. “They are just focusing on surviving right now and keeping things civil.”

Benoit, who freelances for the Bellingham Herald, considered joining Devitt after his visit earlier this year.

“I actually thought about applying to a job down there at his newspaper, but ultimately did not,” said Benoit, who graduated from the Murrow College the year before Devitt. “Now I’m glad I didn’t.”