The hallowed Martin Stadium is named after a Husky 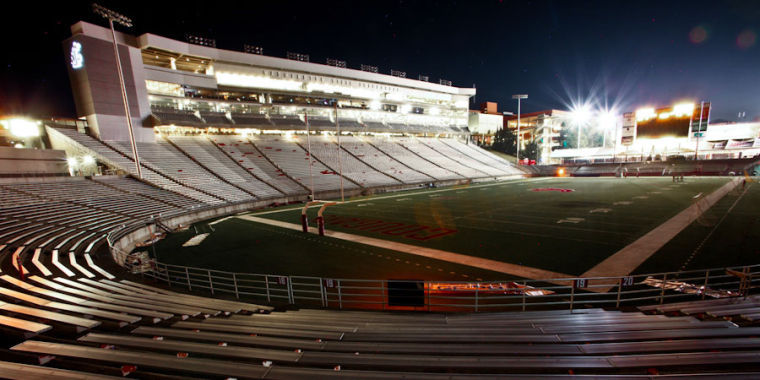 Martin Stadium was named after University of Washington alum Clarence D. Martin after his son donated to the university.

Phase two of Martin Stadium’s ravishing renovation will be completed next May. Phase three should include a name change.

It is a little known fact that Martin Stadium, one of campus’ most sacred establishments, is named after a graduate from the University of Washington. That’s right; our football stadium is named after a Husky.

Clarence D. Martin graduated from the UW in 1906 and went on to become the state of Washington’s 11th governor from 1933 to 1941. In 1972, the stadium was named in honor of Martin posthumously, following a contribution by his son.

Advocates of the name Martin Stadium will tell you Martin donated generous sums of money to the stadium’s construction, and it would not have been built without him. They’ll tell you that something as petty as Cougar-Husky rivalry shouldn’t get in the way of all Martin has done.

They’re wrong, and the rivalry does matter.

The fact is Clarence D. Martin did not donate a penny to Washington State University’s football stadium; how could he have? He had been dead 17 years before construction even began. When Martin Stadium opened in 1972, Martin’s son, Clarence Daniel Martin Jr., made a $250,000 donation to the stadium fund in January of that year, according to the Spokesman Review. Martin Jr., who also spent time studying at the University of Washington, was vice president and director of the Los Angeles Rams at the time.

Which raises two questions: first, why is our football stadium named after someone who had nothing to do with our university? Second, what is to stop me from donating a generous sum of money to the UW athletic fund and having Husky Stadium renamed after myself? Based off of the criteria we used to name our stadium, that shouldn’t be a problem.

Advocates for keeping the status quo often ask: Who is a more deserving namesake? One logical choice would be Randall Johnson, the creator of the iconic cougar logo. The revenue generated from this logo over the years surely trumps the $250,000 donation that Martin Jr. made. The University makes money off of Johnson’s logo to this day.

Another deserving Cougar would be the student’s president, William Glenn Terrell Jr., whose presidency saw campus enrollment increase by 50 percent.

Or how about Bob Robertson, whose signature tagline, according to his biography, “Always be a good sport, be a good sport always,” can be heard at the end of every cougar broadcast dating back to 1964?

In the same category, Glenn Johnson has been Martin Stadium’s voice, pulse and energy for 33 years. Having set the golden standard in public address announcing and the work he’s done for the community as Mayor of Pullman, Glenn A. Johnson stadium would be a fitting tribute.

However, there is one roadblock. It would surely cost millions for the naming rights, and it is all but certain the University would not let a huge revenue opportunity like this go at a discount. In most cases, money talks, and it is doubtful any of the previously mentioned candidates will want to fork over the amount necessary to name something after themselves.

With enough attention drawn to this inconvenient truth and support, changes can be made. As Cougars, we are prideful of our own alumni. So why not make a seemingly obvious change to something that goes against that?

With respect to Clarence D. Martin and all his accomplishments as a governor, and putting aside the Cougar-Husky rivalry, Martin had no affiliation with WSU. More importantly than Martin being associated with the unintimidating purple puppies, our stadium should reflect and honor the accomplishments of a crimson-clad hero. There are plenty to consider naming the stadium after who actually did things for our university. With our rebranding and new renovations taking shape, there is no better time than now.

-Beau Baily is a junior communication major from Puyallup. He can be contacted at 335-2290 or by [email protected] The opinions expressed in this column are not necessarily those of the staff of The Daily Evergreen or those of Student Publications.