End the stigma surrounding marijuana use 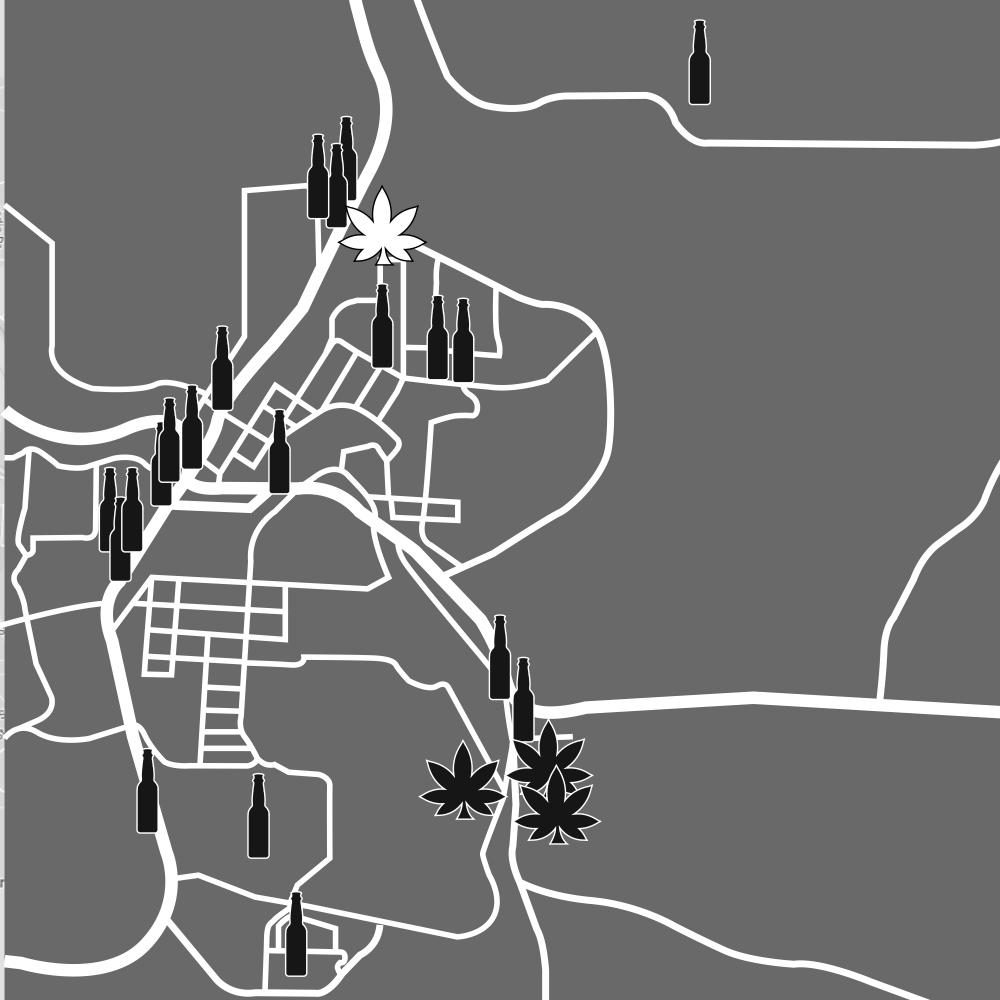 There are over 20 locations where alcohol can be purchased in Pullman. Currently, marijuana is only legally available in three shops. The proposed location of the fourth shop is in white.

The news of a proposed fourth marijuana dispensary location in Pullman has some community members worried about the impact another access channel to the drug will have on the city.
These concerns are unfounded and based on outdated stereotypes surrounding the drug, and there is no real reason to worry about another pot shop in Pullman.
Many people have the misconception that marijuana is more dangerous than alcohol. While it is difficult to compare the two, there are several important facts to consider when assessing the risks involved in having access to and using these restricted substances.
The first point to consider is that the effects weed and liquor have are very different and give the average user distinct experiences. Due to the tendency of alcohol to impede the user’s reasoning skills and make some users more aggressive, alcohol use creates a far greater risk for assaults and violence.
According to a study from the National Council on Alcoholism and Drug Dependence, 40 percent of violent crime in the U.S. is linked to alcohol use.
“Most of what we deal with from a crime perspective is related to alcohol. Whether it’s an alcohol violation, or whether it’s an assault related to alcohol or a trespass,” WSU Police Chief Bill Gardner said.
Alcohol’s availability is also an important factor.
“I tease reporters that as soon as the sun goes down, our three biggest problems are alcohol, alcohol and alcohol,” Pullman Police Cmdr. Chris Tennant said.
With marijuana, the only significant link to crime is not crimes committed under the influence, but illegal distribution and sale of the substance.
There is a significant link between serious crimes like homicide and the sale of marijuana, Tennant said. But the Pullman community is unique because of its small size coupled with the presence of a university.
“Pullman has a below average crime rate, especially if you’re talking about serious crime. We have about one homicide every three years,” Tennant said.
If illegal distribution is the biggest problem facing marijuana, then the opening of another pot shop in Pullman could be positive.
At its best, there is another source of weed that is regulated and can cut into illegal sales of the substance from non-licensed vendors, thereby reducing drug-related crime. In the worst case, it doesn’t do anything to increase drug-related crime, Tennant said, because most casual users at WSU don’t get their pot from dispensaries anyway.
Having more locations to buy weed doesn’t make it any less difficult to buy from them. It only means there is one more place that won’t sell to minors.
The Washington State Liquor and Cannabis Board requires that all marijuana dispensaries check for valid ID at every location, and vendors must have a mandatory alcohol server training (MAST) permit in order to distribute cannabis to customers. Even these simple requirements are barriers to potential underage users buying pot from a dispensary.
Every dispensary in Pullman said they must check IDs and are stricter when it comes to out-of-state identification.
The issue here is not that there could be another dispensary in Pullman, it’s that there are bigger things to worry about than a regulated pot shop. People ought to be focused more on the illegal sale of marijuana and alcohol to minors through non-licensed vendors.
Though Pullman is a safe community, there are still many ways it could improve. Certainly though, the opening of a new pot shop will not hurt anyone — in fact, it will likely help in the long run.e long run.