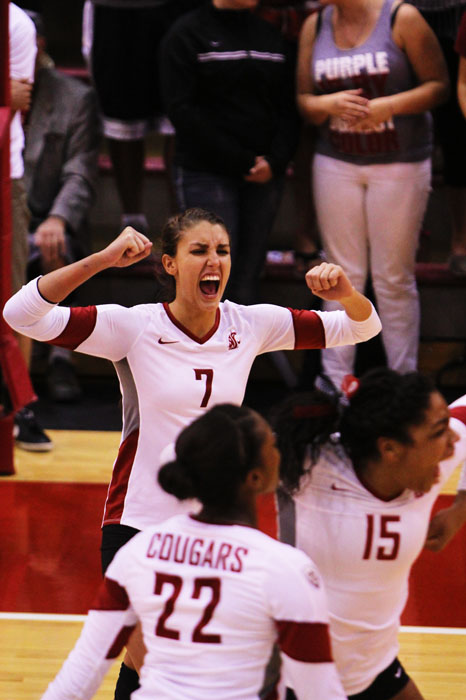 Chants of “13 and 0” rang through the crowd of 822 spectators in Bohler Gym just minutes after the Washington State University volleyball team took down Nevada.

The win over Nevada on Friday moved the Cougars to 13-0 on the season, wrapping up an undefeated nonconference run for WSU and a fourth tournament victory in as many tries.

Following the sweep of the Vandals, WSU took down Seattle University in convincing fashion Friday morning with set scores of 25-13, 25-15 and 25-20.

Hardaway and freshman Kyra Holt led WSU with 12 kills each in the match, followed by Glab and Harris, who both contributed eight kills to the victory.

WSU managed seven service aces in the match against Seattle, with Holt contributing three and senior Camryn Irwin and freshman Tani Stephens both adding two of their own.

The Cougars again had two players with double-digit kill totals in Holt (13) and Hardaway (10).

Also getting in on the Cougars’ 52 team kills were Harris and Glab each with eight and freshman Emmy Allen with six.

After recording seven against Seattle, the Cougars racked up nine service aces against Nevada.

“(Serving aggressively) isn’t even just all about the aces but just getting the other team out of their system,” Greeny said. “If we can get a free ball back then that server has definitely done their job as far as serving aggressively.”

Irwin led WSU with 96 assists in the tournament while sophomore Kate Sommer led the team with 33 digs.