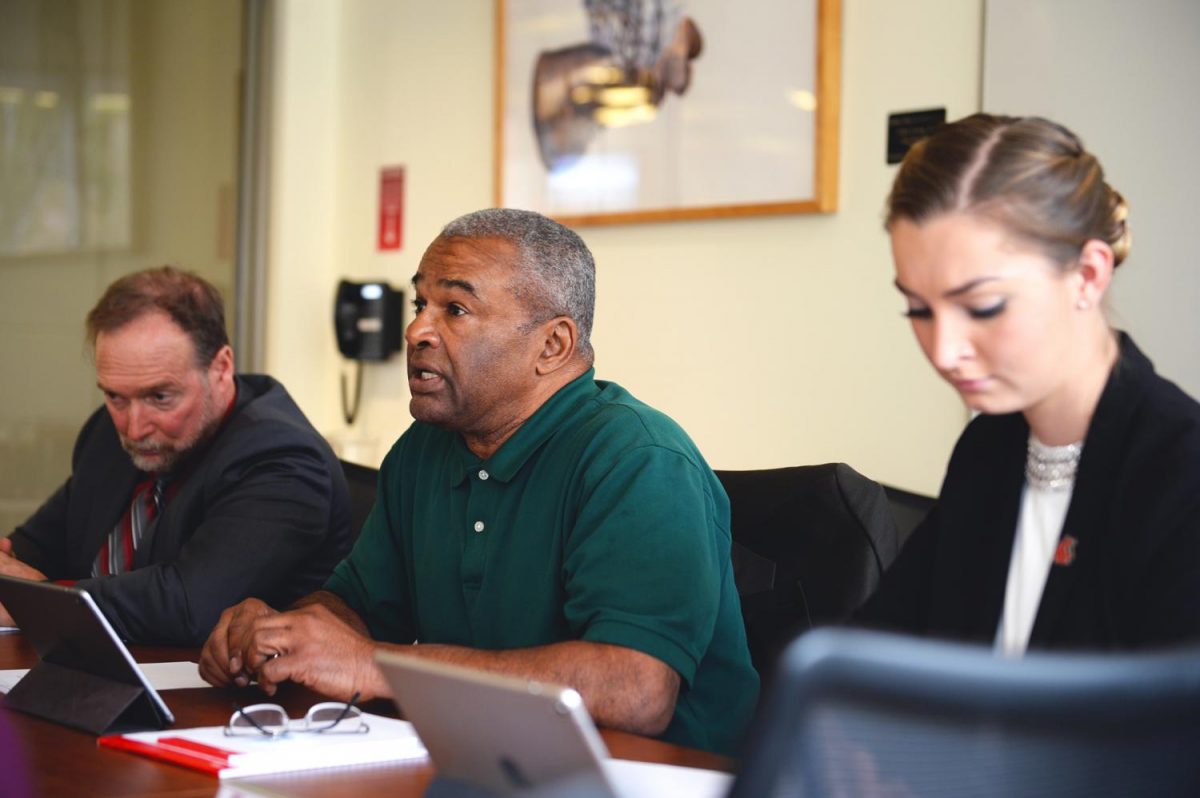 From left to right: Member Brett Blankenship, Vice Chair Ron Sims, and Student Reagent Alyssa Norris during one the WSU Board of Reagents meetings that were held today in the CUB.

A multimillion-dollar land sale, budget deficits, conduct policies and free speech were all on the table when university administrators met with WSU’s highest governing officials during their first on-campus meeting of the academic year.

This morning, the Board of Regents will cast its votes on topics that were presented to them Thursday.

Stacy Pearson, vice president for finance and administration, told the regents the university was ready to close a land sale with the Pullman-Moscow Regional Airport, in which the airport would buy university-owned land to extend its runway. The board unexpectedly cancelled a vote on the matter last month, after learning WSU did not know if it owned nine buildings on the land.

Following the $14.7-million sale, the university would put the money toward moving affected animal and horticulture research facilities.

Joan King, chief budget officer, updated the regents on the university’s declining reserves. WSU has brought in less money than it has spent since the 2014 fiscal year, according to the Budget Office. The university has spent $115 million, leaving reserves below $25 million, the lowest in the past four years.

In 2016, WSU President Kirk Schulz called for WSU to curb its spending.

“We’ve got to build back a healthier reserve balance,” Schulz told the university’s Finance and Compliance Committee on Thursday. “A certain amount of revenues have to be put toward building that back up.”

The Budget Office will take a more long-term approach regarding revenues and expenditures, King said.

She also addressed WSU’s capital budget requests to the state Legislature, which lawmakers did not vote on during the legislative session. The requests have not changed since they were brought before the regents in May, King said. The university will request $158 million from the state government for construction, renovation and design projects.

King said she expects lawmakers will approve the request.

Mary Jo Gonzales, vice president of Student Affairs, laid out a timeline for new student conduct processes. The university is currently operating under a set of “emergency rules,” that include sending the more severe cases to state-appointed administrative law judges rather than WSU’s own conduct board. University conduct officers take on the less severe cases.

The details of the new conduct policies are not yet set in stone, Gonzales said, but the university will release drafts next week, seeking public feedback.
Gonzales said she could not discuss specifics before publicizing the drafts, but she told the regents the Student Conduct Task Force was focusing on improving due process and eliminating bias.

To close the meetings, Schulz shared his goals for the 2017 academic year. Some of his goals reflected student activists’ demands from the sit-in last month, which included implementing cultural competency training for incoming faculty, staff and students, a plan to bring in more faculty and staff of color, and rewriting harassment policies to block offensive speech.

Regent Lura Powell said the topic of free speech came up during a meeting she had with the Association for Faculty Women.

Powell suggested creating a set of “best practices” for addressing particularly offensive speech in the classroom.

“This is something we very much agree with, and [harassment policy] needs to be rewritten,” Schulz said. “The regents are going to hold me accountable to make sure we get this done, but it is going to take some time.”

Provost Dan Bernardo said WSU is working on training for faculty to take on these issues without infringing on the First Amendment.