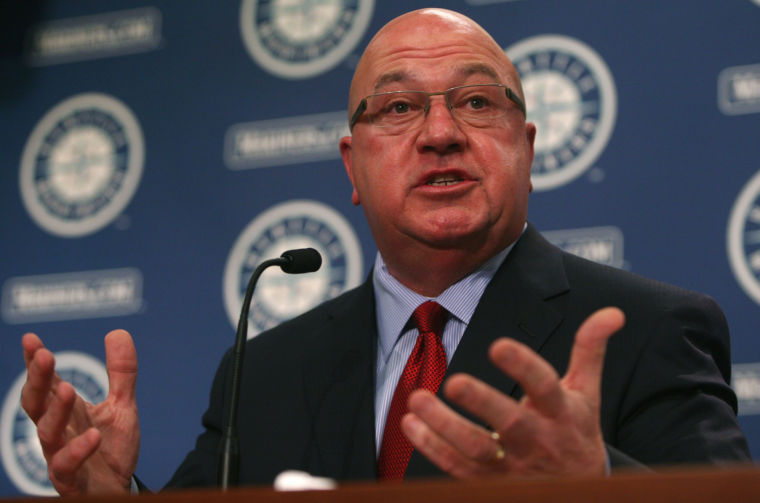 Jack Zduriencik, executive VP and general manager of baseball operations for the Seattle Mariners, speaks during a press conference to announce that manager Don Wakamatsu has been relieved of his duties at Safeco Field, in Seattle, Wash., Monday, Aug. 9, 2010.

The number of seagulls circling the catwalks might’ve eclipsed the number of baseball fans in actual seats on Monday night at Safeco Field.

The Mariners are in the midst of a disappointing losing season, and fans are growing impatient. Many have questioned the job security of General Manager Jack Zduriencik and Manager Eric Wedge, who was on the hot seat before suffering from a mild stroke in July.

The anger and angst felt by Mariners fans is justified, but before it’s off with Zduriencik’s head, fans need to consider why keeping him in the front office could yield positive results.

Zduriencik has been successful at drafting upper echelon players and placing them in minor league programs around the country.

Pitcher Taijuan Walker is currently the fourth-highest ranked prospect in America, as rated by MLB.com. The Mariners also have a top-15 prospect in pitcher Danny Hultzen and three top-100 prospects who have made it to the big show this season.

Walker is currently 1-0 with a 3.6 ERA over three starts at the major league level, according to MLB.com. Additionally, Franklin has a .293 OBP, Mike Zunino has a slugging percentage of .306 and Brad Miller has a team-leading six triples.

The problem for the Mariners lies in their consistency, or lack thereof. Two-thirds of the Mariners’ starting lineup from Monday was comprised of players younger than 26. Five of the Mariners’ starters have less than one year of major league experience. The amazing thing about those numbers is that Seattle is still finding ways to compete in a league where playing five rookies is a kiss of death.

These new additions helped the Mariners experience flashes of brilliance, such as when Seattle posted a season-best eight game win streak in July.

The Mariners young guns also helped the team take over in the home run department. They’ve totaled enough long balls to keep the Mariners in the upper third of the league in that category.

While Seattle has seen some amazing production from their youngsters, they’ve also seen their fair share of downturns due to a lack of experience. Base running errors, injuries, and miscues have all bitten the Mariners at some point this season; however, the potential shown by the Mariners newest faces should make fans confident in the future success of the team.

Some fans are trying to use the Mariners’ poor attendance numbers to constitute firing Zduriencik. Attendance numbers, like those experienced by fans on Monday, played into this argument. According to KOMO News, “The announced attendance of 9,808 was 10 fewer than the previous low at the 14-year-old park, set April 29 against the Orioles.”

The biggest mistakes the Mariners have made throughout the years involved giving up on personnel too early.

Adam Jones was traded away when the Mariners didn’t believe he would progress. He became an All-Star outfielder for Baltimore. The Mariners cut ties with Doug Fister to acquire Casper Wells from the Tigers. Fister is now the second-best pitcher in Detroit behind the American League Cy Young Award winner, Justin Verlander.

See where this is going?

Zduriencik could be a successful general manager. Fans should be fearful of what will happen if Zduriencik goes on to be successful somewhere else, instead of being focused on finding the wizard that can magically transform the Mariners roster. It’s the more likely scenario.

Don’t expect a World Series next season, but ask for consistency. The best teams in any sport are consistent. If fans stay the course and let the Mariners front office do what they are hired to do, the team should continue to improve.