History on display at Spot Shop

After owning a cleaning, alteration shop in Pullman for decades, owner’s brother will soon take over 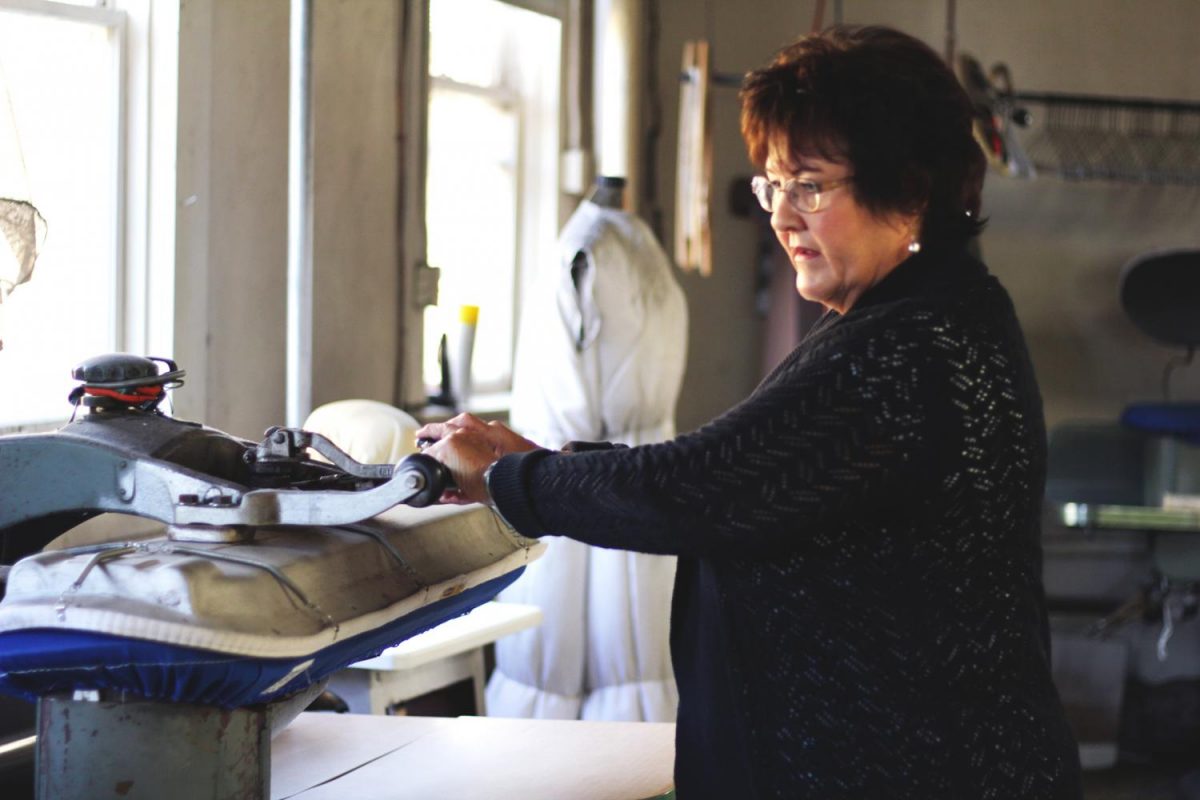 Debbie Brindamour, co-owner of the Spot Shop, demonstrating how to use one of their pressing machines on Tuesday.

Spot Shop owners Mike and Debbie Brindamour have enjoyed owning and operating their business for 38 years in Pullman because of the loyal and caring community.

“We’ve had customers in this town for years,” Debbie said. “As long as we’ve been here.”

Mike said they decided to buy the business in 1979 from Howard and Kay Kronemeyer, who had owned it before them for about 35 years.

Over time, Debbie and Mike received historical artifacts from people around town. Yellow-brown tinted clothing hangers with the store’s name printed on them sit on display for customers to see as they walk in.

The owners also acquired a 1919 price list for clothing items and framed it for customers to see the old-fashioned items people use to get cleaned. One of the antique items was spats, a shoe accessory used to keep shoes and socks from getting dirty.

Mike said he wanted to continue work as a dry cleaner, like his father, when they bought the business almost four decades ago.

“We just seem to work together well,” Debbie said. “I took bookkeeping in college, and I did alterations for years, because I loved to sew. That helped because we could just complement each other.”

Mike grew up working in a dry cleaner shop with his father, Oscar Brindamour. His dad’s business in Yakima was called Vogue Cleaners.

Mike found the Spot Shop when he was on the job with Vogue cleaners, traveling to Pullman, Debbie said.

“He has a good reputation because his dad taught him well,” she said.

The system of cleaning the clothes involves a process of about three to five days, Mike said.

They put the clothes into a bag, make a ticket for the order and wash the clothes in a Western Eagle dry cleaning machine, which is easy on the silks, downs and wools. They use a petroleum solvent to clean the clothes, Debbie said, because it doesn’t eat buttons or plastic.

“It’s like a monster washer, but it doesn’t run on water,” Mike said. “It’s an older solvent, but it’s really reliable.”

Then they dry the clothes in a special dryer and bag them with the bagging machine, he said.

Their business also provides services to replace the fabric on the outside of pillows with their feather machine, Debbie said. The fabric that holds the pillow together is called a ticking.

“You virtually get a new pillow back,” Mike said. “We clean your feathers, we sanitize them and then we put them into a new ticking.”

Other services include cleaning down comforters and sleeping bags and box wedding gowns, Debbie said.

“I don’t do as many alterations as I used to,” Debbie said, “because I have arthritis in my hands.”

The Brindamours kept the name Spot Shop from the previous owners because Mike said he liked the name. Debbie said that before the building became a dry cleaning business, it was a café.

The two hope to keep the dry cleaning business in that building even after they retire. Mike’s brother, Steve Brindamour, plans to take over next year, Mike said.

“He had a business for 28 years. He also grew up in the business with my dad and me,” Mike said, “but Pullman will be left with a really good dry cleaner.”