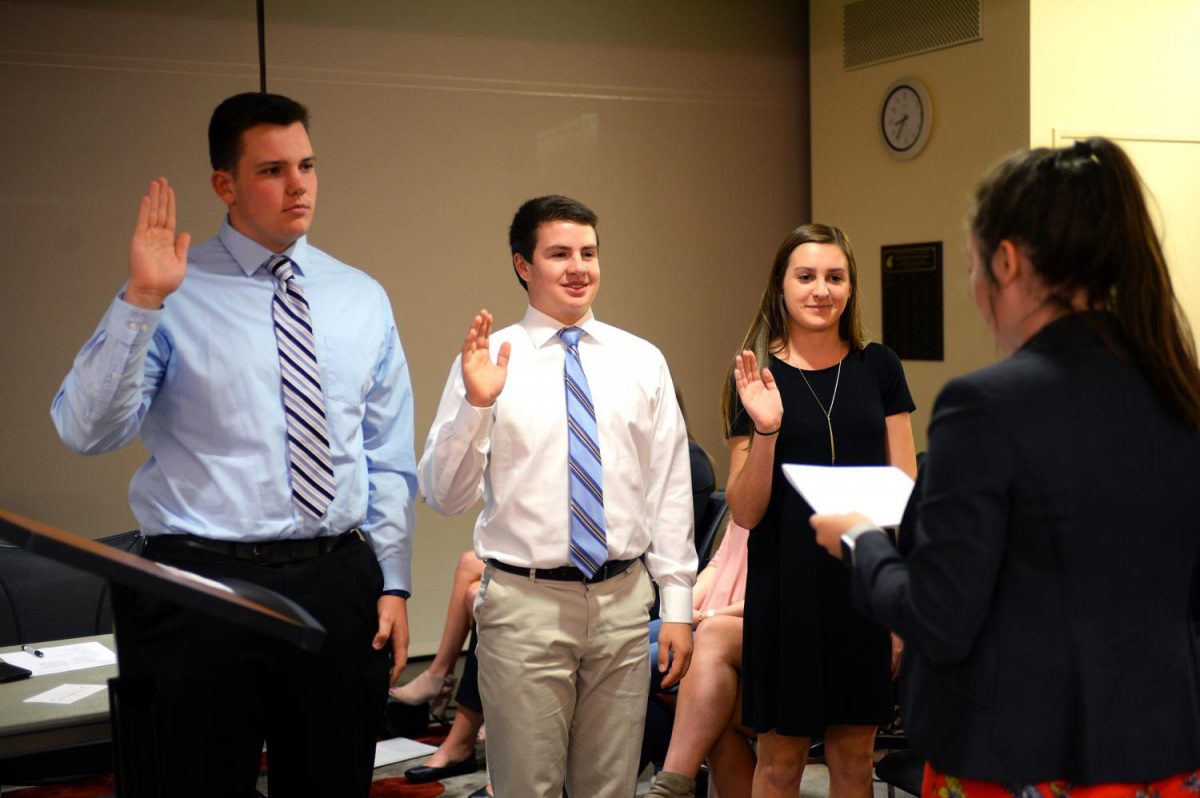 Nine arrived, but only three left with the title of ASWSU freshman delegate.

Each freshman stood at the lectern and made their case to the Senate. Many touched on leadership experiences from high school, and their early impressions on how to improve life for first-year students.

Once all had spoken, the Senate cast their votes for the first position.

“I [applied] because I really care about other people, and that is what leadership is all about,” Gurney said in his speech to the Senate.

As a freshman delegate, he said, he wanted to learn the ropes from the more experienced students on the Senate, and improve communication with the student body.

Gurney said he is excited to get started — he changed his work shift from Wednesday nights to Thursday nights so he could attend senate meetings — because he has a long-term plan to run for ASWSU president, or vice president his senior year.

The other eight delegates waited while the Senators went to an executive session, behind closed doors, to debate who should fill the next position.

“Like a cow in tall grass, I am utterly tickled to be here today,” he told the Senators.

Gutierrez said growing up on an alfalfa farm taught him the importance of taking initiative, but he wanted to take a role as a servant leader.

“Leadership is not about the title or the power,” he said, “It’s about helping others.”

To help others, Gutierrez said he plans to work on a freshman health initiative to promote cleanliness and healthy eating, so fewer new students would fall ill.

“College is really a petri dish of disease,” he said. “So we can really help the freshmen.”

Despite only getting a handful of votes in the first two rounds, Anne Kasenchak, a genetics and cell biology major from California, got nine votes in the final round.

Kasenchak said she plans to work on improving dining halls in her new role.

More vegetarian, vegan and gluten-free options would benefit students, she said. Kasenchak also wanted more premade dining hall foods so students could pick up something to eat between classes.

Additionally, she said, ASWSU could do more to reach out specifically to out-of-state students to help them settle in to Pullman.

Harald Hyllseth, a junior majoring in communication, used to be a freshman delegate himself.

“It is one of the most difficult jobs on campus because it is so open-ended,” Hyllseth said.

Freshman delegates have a lot of responsibility in representing one of the largest populations on campus, Hyllseth said.

The new appointees would have to immerse themselves in the experience, he said, by attending as many Senate-related events and meetings as possible.

During his time as delegate, Hyllseth sponsored a bill that codified the ASWSU oath of office into the bylaws.

He said he hopes the new delegates use their positions to lead and empower the freshman class.

“[Freshman delegates] are the next generation,” Hyllseth said. “It’s what you make it.”