Soccer looking to bounce back after loss to Buffaloes

After losing their second straight game, the Cougs hope to get back to their winning ways against Utah 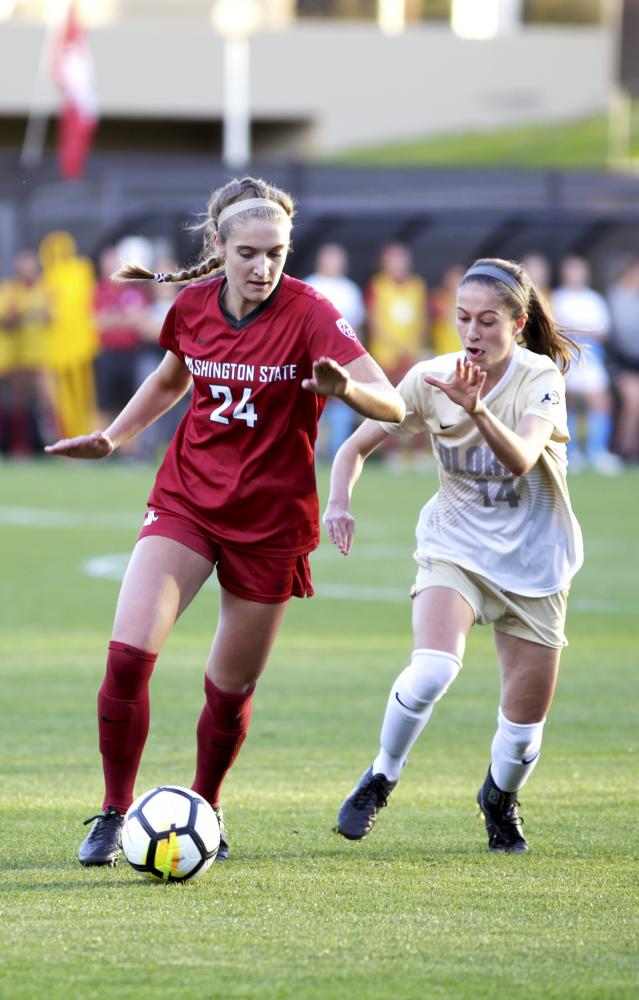 Junior midfielder Maegan O'Neill dribbles the ball away from a player in a game against Colorado on Thursday.

Cougar soccer (5-3-2) fell for their second straight loss, this time to Colorado (7-2-2). Despite opening the game with a salvo of shots to put pressure on the Buffaloes, WSU would concede a goal in each half, moving to 0-2 in Pac-12 play.

The Cougars came into the game hoping to rebound off their previous loss to Stanford, but would face an unmovable Colorado defense. During the opening minutes, WSU unleashed the full force of its attack, trying to crack open the away team’s defense.

Spurred on by the cheers of the home fans, the Cougs took shot after shot at Colorado’s goal, forcing redshirt sophomore goalkeeper Jalen Tompkins into constant action. Their best efforts saved or deflected away, the Cougs were unable to convert, and became victims of a penetrating counterattack in the 30th minute.

Breaking through the defense, Colorado senior midfielder Becca Rasmussen weaved and took a shot at WSU redshirt goalkeeper Ella Dederick, who saved the initial attempt but could not hang on to the rebound, allowing Buffs’ freshman forward Marty Puketapu to slot the ball into an empty net.

The Cougs opened the second half with patient play. The Buffs put immense pressure on the Cougar defense, forcing a turnover and capitalizing on the Cougars’ mistake.

Rasmussen would once more initiate the play, beating defenders senior Jordan Branch and junior Grace Hancock, before sending a ball across the six-yard box that deflected high into the air. The scramble for the ball resulted in an own goal, the first given up by WSU since Sept. 16, 2012 against Idaho.

With the score at 0-2, the Cougs felt the pressure and failed to mount any sort of attack that could catapult them back into the game. A strong Colorado defense managed to shutout WSU at home this season.

For the remainder of the night, Colorado dominated play, raising its total shot tally to 18 over WSU’s 13, but the Buffs could not widen the gap.

The loss to Colorado marks the second straight year that the Cougs have fallen to the Buffaloes at home in Pac-12 play, with Colorado becoming just the second team to score against WSU at home in 2017.

Colorado now travels to Seattle to play Washington, while the Cougs await Sunday’s clash with No. 24 Utah (5-3-2).

Sporting the same record as WSU, the Utes recently played and lost to rival University of Washington. Like the Cougs, they were shutout in a 0-2 loss.

Utah’s defense is allowing just under one goal per game on average, while scoring an average of just over two goals per game on offense.

The game is scheduled to begin at 11 a.m. tomorrow on the Lower Soccer Field. It will also be broadcasted on the Pac-12 Network.