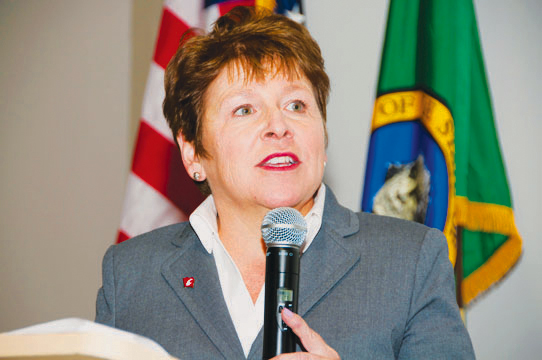 WSU-related imagery appeared in an ad for a local Congressional candidate, which may have violated the state’s campaign guidelines.

Lisa Brown — a former state Senate majority leader and WSU Spokane Chancellor — used imagery of the Spokane campus, a WSU flag and footage from the Elson S. Floyd College of Medicine’s inaugural class welcoming ceremony in an ad announcing her candidacy for the House of Representatives, according to a Public Disclosure Commission, or PDC, complaint.

The Washington State Republican Party filed the complaint with the PDC, which enforces campaign finances.

“This is an issue of public trust,” Heimlich said. “This is a taxpayer funded institution.”

The Republican Party accused Brown, a Democrat, of using state resources on her campaign while she was still a university employee.
“If she planned these as a public employee using public facilities,” he said, “that is illegal.”

In an email to the Evergreen, Erin Ross, Brown’s Chief of Staff, said the complaint had no merit and was intended to distract the public from the issues.

“Neither Lisa Brown nor her campaign used public resources in the production of the announcement video,” Ross wrote.

She also wrote that Brown would issue a detailed response to the PDC rebutting the accusations, which Ross called “groundless.”

Phil Weiler, WSU’s vice president for marketing and communications, sent Brown a letter on the same day the complaint was filed, asking her to refrain from using WSU logos, trademarks and footage in her campaign videos and remove them from any existing ads.

“They should not have used WSU imagery,” Weiler said.

The university would not intentionally assist a campaign for public office, he said.

The Lisa Brown for Congress YouTube channel has since taken down the video and replaced it. The new video does not feature any WSU logos, but does still have an image of the medical school, which the Republican Party cited in its complaint.

The PDC has not launched a formal investigation, said Kim Bradford, the PDC’s communications and outreach director. At this point, it is just assessing validity of claims made in the complaint.

Bradford said she could not discuss details of the PDC’s actions. Once the initial review is complete, she said, the PDC has the options to dismiss the complaint, issue a warning, issue a statement of understanding or launch a formal investigation.

Brown is challenging Republican incumbent Cathy McMorris Rodgers for her seat in the House of Representatives. Democrat Matthew Sutherland and Independent Eric Agnew are also running.