After losing three of four on the road, Cougs host Colorado 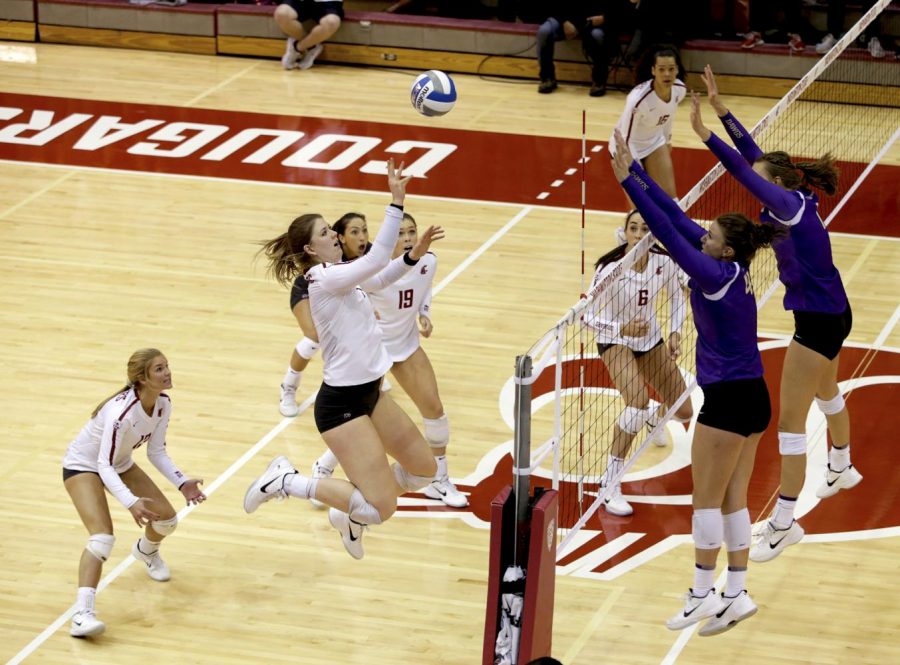 Junior outside hitter McKenna Woodford leaps to return the ball to UW during their match on Sept. 20.

“This conference is extremely tough, so we don’t really pay attention to the rankings because somebody’s always ranked,” WSU Head Coach Jen Greeny said. “We know that they’re both very good teams, they’ve had great wins, they’re well coached. We just have to get better on the court, and prepare for each one of them like we normally do.”

Friday’s match will be the Cougars’ second in Bohler Gym during conference play, after playing three straight road opponents.

“We’ve had such a crazy travel schedule the first part of the season, so it’ll be great to be back in Bohler,” Greeny said. “We get to sleep in our own beds, our girls finally get to go to class for an entire week, which they have not done yet up until this point.”

The Buffaloes picked up a pair of wins last weekend when they defeated Oregon State 3-2, and then No. 12 Oregon 3-1. The Friday match against the Cougs is the first of four road games for the team.

In contrast to Colorado, WSU has been struggling against ranked opponents. The Cougs lost to No. 9 University of Washington, No. 13 UCLA, and No. 15 USC. WSU’s only win in conference play came against an unranked Arizona team.

After Friday’s match against the Buffaloes, WSU will play No. 17 Utah two days later on Sunday. While the Cougs and Buffaloes face off, Utah will travel to Seattle to face UW before hitting the road again to meet WSU Sunday in Bohler Gym.

WSU leads the all-time series against Utah 13-9, but Utah has won three of the last four meetings, including two straight. Utah swept the season series last year, including winning in Pullman for the second time in school history.

Four of the previous eight matches between the Utes and the Cougars have gone the full five sets. Utah is 7-4 all-time against WSU since becoming a member of the Pac-12. In a news conference Tuesday, Greeny was asked what a full Bohler Gym means to the team, after WSU football Head Coach Mike Leach said a full Martin Stadium was vital last weekend in the upset of USC.

“Coach Leach is right … the fans make a huge difference,” Greeny said. “We really hope that the fans come out … we love the atmosphere in Bohler Gym. It’s a great place to play, and we want to make it even more of a home-court advantage.”