An in-depth look at sex as a sport

While intercourse is multi-faceted, requires skill, regulations, columnist argues it is not a sport 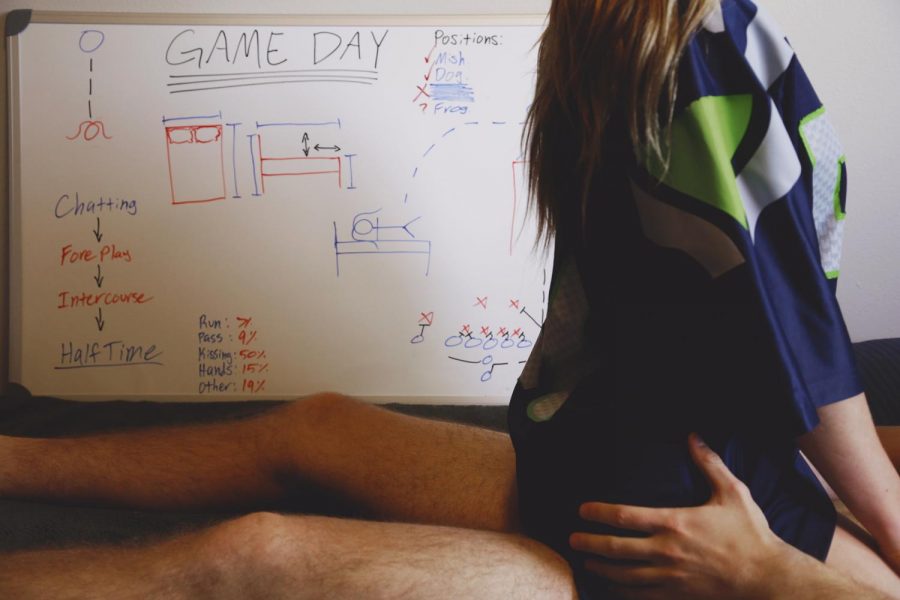 Talking dirty to a partner can be intimidating, so make sure it is mutually decided upon and done at the correct place and time.

Pumping and yelling is more than just a sportsy-thing. As a sport management major, I’ve spent a lot of time truly defining sport — and yes, cheerleading counts.

According to Cosmopolitan, “sex is basically an Olympic sport,” but search online for a short time and you’ll find that many professionals disagree.

For sex to be considered sport, it must satisfy three criteria: Physical skill or exertion is required in the activity, along with some sort of rules or regulations. Finally, activities must be competitive.

This is the most obvious box to check off when questioning sex as a sport. While you do not have to be particularly skilled to participate in sexual intercourse, it often involves exertion. Again, think pumping and yelling.

There is a reason couples build up a sweat in between the sheets. They are usually displaying a high amount of physical activity. That is not to say having sex is synonymous with being a professional athlete. It just means sex requires more physical skill or exertion than moving your hand.

Think of sex like golf. You can play an easy game of golf or spend hours on one course. Depending on the day, you might play by yourself or with someone else. But the point I’m trying to make is golf requires physical activity — not necessarily a lot, but enough to be categorized as a sport.

Psychology Today compared sexual intercourse to bowling, due to the number of calories burned during a “session.”

Although Western society makes generalizations about how sex should be done, there is no required handbook on how it must be done. For sex to be considered a sport, rules and regulations should be stretched a bit to mean guidelines.

Plenty of guidelines exist in the sexual world.

For example, talking dirty is widely accepted during intercourse. Treating your partner like an object is not. Of course, not everyone follows these guidelines. There will always be people that hate foreplay or take talking during sex a step too far.

Rugby does not have nearly as many rules as American football, but it’s still considered a sport. Hell, some prefer to play rugby without any rules. What is unique about sex though, is the number of unspoken rules.

In baseball, it is common courtesy to avoid stealing bases if your team is up by a ton of runs. Will teams be punished for stealing bases? No.

It is essential to know your partner, so you can figure out what their rules are.

Competing during sex just sounds negative. With that said, there are a couple ways in which intercourse can be considered competitive.

Think about how often you and a partner are doing the nasty. According to a study published by Tim Wadsworth, associate professor of sociology at University of Colorado, Boulder, happiness depends on more than just how much sex you have.

Comparing the amount of sexual intercourse one couple has to another couple is competitive in and of itself. Thus, Wadsworth found that believing you’re having more sex than another couple boosts happiness.

Competition in the bedroom could also be based on pleasing your significant other.

I won’t go into any specific details here, but competing to satisfy your partner more than the amount of satisfaction you’re receiving should be considered.

For me, sex does not satisfy all three prongs, and therefore is not a sport. But I will let you decide for yourself. Maybe you don’t see it as competitive, and that is fine. I have gone into detail about why it can be considered a sport, but there are certainly reasons to believe it isn’t.

Like sports though, I hold the belief that protection is beneficial. Make sure to use a condom.