Bisexuals are more likely to be closeted than gays, lesbians due to stereotypes about them, survey says 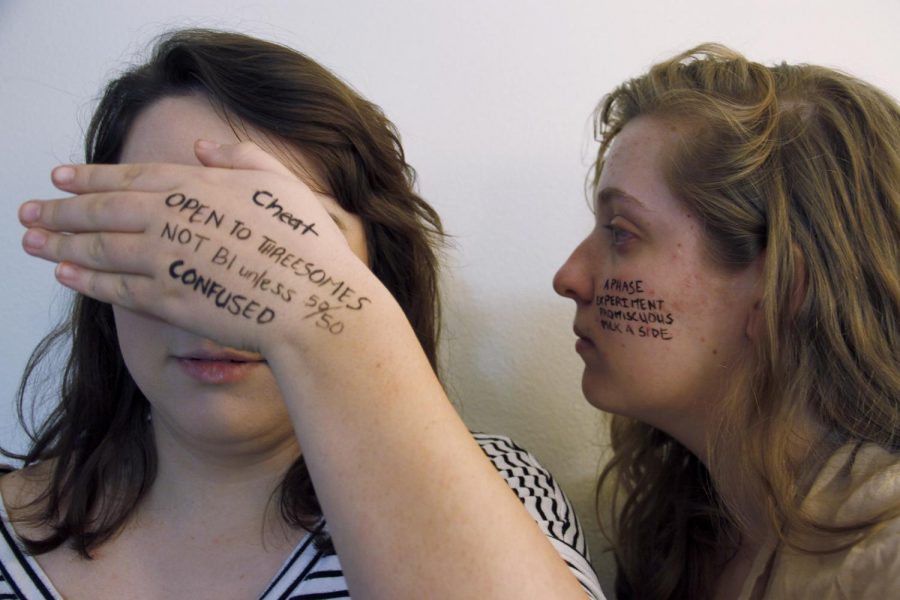 Those who identify as bisexual are more likely to be closeted than gays and lesbians due to negative generalizations of the sexuality.

Bisexuals sometimes refer to themselves as the only lowercase letter in LGBTQ.

“I used to keep it a secret,” Plunkett said. “I thought it was a kind of taboo thing.”

While she said most of her experiences talking with friends about her orientation have been positive, she has still born the brunt of many misunderstandings. She did not totally understand herself in the beginning, because her sexual education classes in middle and high school did not mention bisexuality at all.

Plunkett said many already have their mind made up about bisexuality before they learn about her. Some do not believe her when she tells them.

“I’ve had people tell me to my face that I’m lying,” she said. “They’re just denying that people would fall for their own gender.”

And if they do believe her, Plunkett said, some make assumptions about what it means to be bisexual.

“[Many] assume all bisexual people are polyamorous,” she said. “Guys hear their girlfriend is bisexual and they think, ‘Ooh, I get to f— two girls.’ ”

Nishant Shahani, an LGBTQ studies professor at WSU, wrote in an email that pop culture can perpetuate this caricature of bisexual women. It would be a mistake to think the visibility of bisexuals in pop culture equates to progress. The depiction relies on sexual objectification through the gaze of heterosexual men, Shahani wrote, which is “just textbook sexism.”

Jennifer Baumgardner, author of the book “Look Both Ways: Bisexual Politics,” said these assumptions are common. Women are assumed to be straight, employing bisexuality as a performance to pleasure straight men. Men are assumed to be in denial of their homosexuality, using the title of bisexual to escape their true orientation.

“They give you your sexuality if you’re bisexual instead of it coming from you,” Baumgardner said.

One reason for denying the existence of bisexuality, she said, is that some fear they could be bisexual. She herself did not think of herself as bi before having her first relationship with a woman when she was 23.

“The idea of being with a woman was disorienting because I self-identified as heterosexual.” Baumgardner described her experience. “I spent 23 years of my life thinking I am one thing. Was it all a lie?”

Early on, she said, she struggled to truly understand herself. She felt like she suddenly stopped emulating what a young woman was supposed to be doing in her romantic life.

Baumgardner, now 47, said her first relationship with a woman opened an entryway to intimacy she had never known before. She felt less defensive, more at ease, because she could ditch her preconceived notions of gender and sexuality.

People may want to deny bisexuality’s existence, she said, because it threatens their own ideas of what it means to be straight.

“[The assumption is] if bisexuality exists, then at any moment, any of us could meet someone of the same gender and fall in love with them,” Baumgardner said. “It is a blow to your sense of self.”

Bisexuality is also not just one tone of gray between hetero and homosexuality. Bisexuality, like sexuality itself, exists on a spectrum, according to the American sexologist Alfred Kinsey.

Kinsey pioneered the Kinsey Scale, which measures sexuality on a zero-to-six scale, zero being exclusively heterosexual and six being exclusively homosexual. Bisexuals are not always equally attracted to men and women. According to his scale, people between two and four are considered bisexual.

Baumgardner said she did not realize she was bisexual because she thought it was extremely rare and she was more aware of the gay and straight ends of the sexuality spectrum.

“We like to think we really have a grip on who we are, but we change and evolve,” Baumgardner said. “Sometimes we just mature as our life unfolds.”