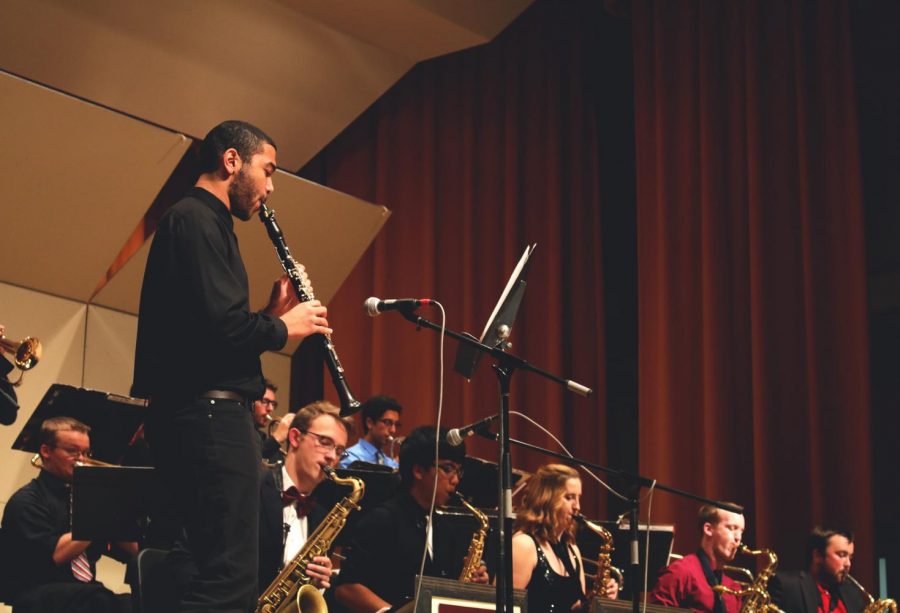 The Humanity Project by WSU student Alison Poteracke was a composition that did something fresh, by taking inspiration from great jazz composers.

I could detect Cannonball Adderley and Duke Ellington’s influence while listening to her composition, and was genuinely pleased to hear it.

The majority of the composition was very good, the WSU Jazz Big Band did a phenomenal job, and so did the guest soloists, Elaine Martir on flute, Jacob Ward on clarinet and Kiya Fife’s vocals.

The composition has six movements ranging in theme, including the Syrian conflict, the Pulse Orlando Shooting, gender inequality and the Black Lives Matter movement.

In the first movement, “No Window Panes Left in Aleppo,” Poteracke introduces the composition with a piano piece that circled like the old GameCube and was pulled tight by the drum kit, piano and vibes, making the song more mature.

The first movement wasn’t extremely intricate, but the piece was still well-composed, playing off the simplicity of the song like Ellington did back in the day.

The vibe solo sent the song to Aleppo, fitting the piece appropriately despite the feeling of being stuck between a ballad and a Latin chart for the majority of the movement.

The movement ended abruptly, leaving it like the war-torn country of Aleppo: broken.

The fourth movement, “Love is Love is Love,” featured clarinetist Jacob Ward and was one of the more moving pieces of the entire suite. He convinced me of the composer’s validity by playing true.

At intermission, Poteracke came out and thanked everyone for attending, and explained that the purpose of “The Humanity Project” was to encourage conversation about violence and human indecency.

The last two movements were the best of the suite.

Movement five, “She Persisted,” was the only song that implemented voice. Kiya Fife sang with a great delta blues style, opening with sparse accompaniment from the band, a composition choice that gave a greater symbolism to the song.

The band then came in, beautifully reinforcing the melody followed by another stunning Raul Blasco piano solo.

The final movement, “Black Lives Matter,” played off African-American styles. With a massive gospel soul-inspired introduction, the bass, tenor saxophone, piano and drums sent the song out of the park, but got a bit too avant-garde for me.

This was a song that showed the struggle between light and dark imagery. The song goes from being brighter than a thousand fireflies, to being dark and moody. It seemed to reflect the Black Lives Matter movement and Poteracke’s composition skills.

The social message of the music was of consequence, the band performed very well, and the actual composition was an inherently prodigious undertaking, but it wasn’t a Gershwin masterpiece, by any means.

Poteracke masterfully composed the rhythm, piano and saxophone parts, but the horns in the brass section were underutilized. The lead trumpet player in that band could be the next Dizzy Gillespie, but I barely got to hear him play.

Despite the flaws in Poteracke’s message and composition, it was still a jazz suite worthy of praise. Poteracke drew inspiration from the greats while composing an original suite.

Blaine Ross is a freshman music education major from Montesano. He can be contacted at mint@dailyevergreen.com.