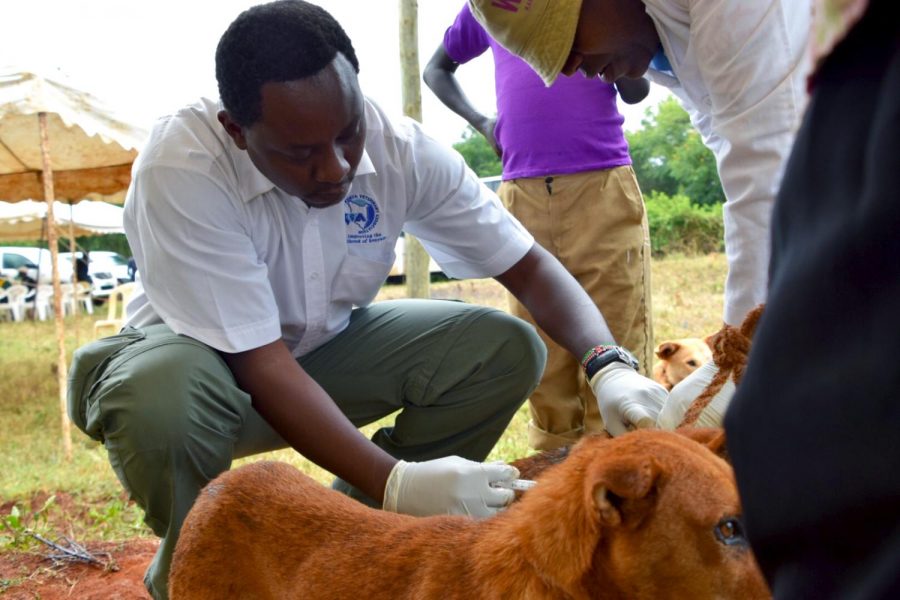 Researchers at WSU are partnering with Serengeti Health to research rabies vaccines and promote animal and human health around the world.

Guy Palmer, the senior director of Global Health at the Paul G. Allen School for Global Animal Health, explained that the focus of their rabies research is to identify the constraints of getting vaccines to victims of animal bites and eliminating rabies from dog populations in communities with high disease rates.

“Sixty thousand people die every year, most of which are children,” Palmer said. “We’ve seen that if you can vaccinate dogs, you can eliminate it.”

In south Asia and Sub Saharan Africa, 99 percent of rabies comes from dogs, he said.

One of the researchers working on this aspect is Dr. Thumbi Mwangi. He joined WSU in 2012, but began working in Kenya on the project in 2014.

Mwangi said there are four strategies to the research: break the cycle of rabies outbreaks through mass continual vaccination, prevent people from dying from rabies exposure, increase public education, and collect data on the population and disease through sampling.

Mwangi works to research the origin of rabies and where outbreaks are occurring, sampling dogs in the area, and developing effective ways to deliver vaccines to dogs and post exposure treatment to people.

To do this Mwangi works in health facilities identifying if a person has been infected based on the dog bites, and following them back to villages to make sure others don’t have it, he said. This is called “conduct tracing.” This means the researchers find the source, investigate if others were bitten by the same dog or other dogs, and follow them to make sure every source or infected person is treated, he said.

“The people in the health facilities, they are the tip of the iceberg, it’s not everyone,” Mwangi said. “We come to help them, but also to follow them back to the villages to help identify other people that could have been exposed, but did not go to the health facilities.”

Another aspect of the research being conducted is to prevent people exposed to rabies from dying.
“Once a person begins to show signs of rabies, they will die,” Palmer said. “Nothing can be done. It is 100 percent certain.”

There are challenges treating people in the communities researchers are working in, Palmer said. The cost of the treatment, he explained, is three times the monthly wages of families, plus access to the post exposure treatment, which for some, can be a five mile walk, and the treatment has to be administered four separate times.

A rabies vaccination has been around for a long time. Palmer said research done at WSU has modified and changed the vaccine to be thermostable, which means it is usable at room temperature.

Palmer said that in areas researchers are working in, such as Africa, refrigeration is a problem.

“When you go to the vet, they reach into a fridge and grab the vaccine, it’s very straightforward. The key is that it came from a refrigerator,” Palmer said. “It is very expensive to drive around in a refrigerated truck.”

The thermostable rabies vaccine is viable for three months without refrigeration. It can be distributed out to the communities, Palmer said, and the community can then be responsible for the vaccine.

Once vaccinated, dogs are resistant to the disease for about three years he said. Mwangi said, three mass vaccination programs are planned each year, typically during school holidays.

“The reason for this is that it is small children that seem to really enjoy bringing their dogs in for a vaccination,” Mwangi said. “We have good turnout and high vaccination coverage when the kids are home [from school].”

Mwangi said that covering 70 percent of the dog population is an effective way to end the cycle.

Dr. Felix Lankester, another researcher located in northern Tanzania, carries out field sampling as well as administrative work associated with the project.

The overall goal of the project is to eliminate rabies globally, Lankester said, and I want to see our research translated into effective procedures used elsewhere to implement rabies control.

Locally, the program works with many veterinarians across Washington. For every rabies vaccination they give, local veterinarians donate a dollar to eliminate rabies. These donations go to the Allen School, which goes straight toward funding rabies research.

Both Palmer and Mwangi said the overall goal of the project is to eliminate rabies as a cause of human suffering and death by 2030.

“Sometimes you really have no end, you just keep reducing the burden in animals and people,” Mwangi said. “We keep sharpening our tools and keep working towards our goal of 2030.”