After the U.S. ended DACA, many undocumented LGBTQ students uncertain of future 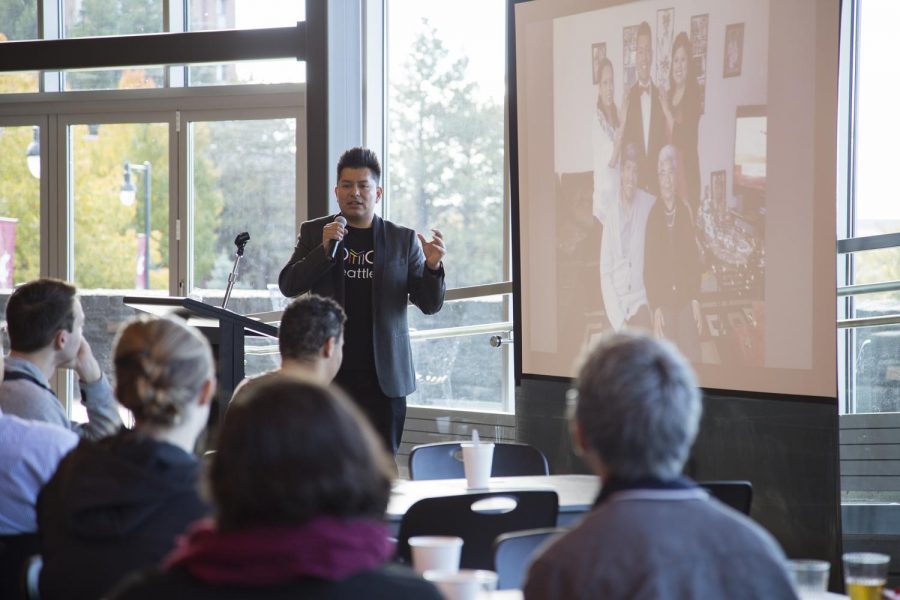 Ray Corona talking about his life experiences at the Undocuqueer Conference Saturday.

Students, educators, lawyers and activists spent their Saturday in the Elson S. Floyd Cultural Center discovering different aspects of undocumented and LGBTQ identities, and ways to support those who identified with one or both.

Keynote speaker and first undocumented member of the Seattle LGBTQ commission Ray Corona, said he could relate to Trump voters who are poor, white and live in rural areas. He spoke to the interconnected nature of the struggles they face with the struggles he faces.

“I think people who have marginalized identities and challenges in their own lives, can empathize with these Trump supporters,” he said. “As an undocumented person, I can relate most with people who are poor and white and voted for Trump, versus anything. This political climate was made by these divisions, which someone is profiting off of. It definitely isn’t me.”

A glance at the Undocuqueer conference program alluded to the multifaceted nature of the event: Supporting undocumented and queer K-12 students, navigating graduate school as an undocumented woman in STEM, Queer and Now.

Various workshops were dedicated towards resources for undocumented immigrants, on topics such as the legal rights and protections in interactions with immigration enforcement officials, youth and grassroots community organizing, and navigating graduate school, among others.

Kamau Chege, presented on the UndocuBlack Network, an organization of black undocumented immigrants. He came to the U.S. from Kenya when he was six years old with his parents and sister, and was at risk of deportation until he became a Deferred Action for Childhood Arrivals (DACA) recipient in 2012, which allowed him, now a 22-year-old, to finish his undergraduate studies at Whitworth University.

Teacher and Gay-Straight Alliance adviser at Grandview Middle School, Pedro Rodriguez spoke about the process of implementing and helping facilitate GSA for middle schoolers to provide a space for children and younger teens to discuss identity and politics. He recalled the tension felt in discussions after the election at his school, whose student body is 92 percent Latino and primarily migrant and agriculturally based.

MEChA President Alejandra Martinez spoke about machismo, strong or aggressive masculine pride, and homophobia in Chicano communities in her workshop on the Chicano theory of Nepantla, a broadly defined concept of “in-between-ness,” which she encouraged attendees to self-interpret.

Corona gave the keynote address for the conference, saying he appreciated the number of rural attendees.

“I’m happy there is regional representation from rural areas,” Corona said of attendees, who came from Oregon and Idaho as well. “When we think of central and eastern Washington … though there is agricultural labor taking place, we don’t think of these places as accepting places for queer people.”

Corona said he has seen progress in conversations about intersectional identities throughout the state of Washington.

“This is the only conference of its kind our state so I felt that this was extremely important during a time we live in today,” he said “I think the fact that it’s hosted at WSU has allowed it to be a regional thing.”

For those not in a position of safety to come out as undocumented, LGBTQ or both, Corona encouraged that they identify support networks they can go to for help and foster relationships with those in the support network.

Activism is a life commitment, made up of small actions taken every day to eventually lead to something else, he said.

“It’s not just about going out to that protest and changing your profile picture, posting that Facebook status. It’s about everyday actions that people are taking that make things better.”