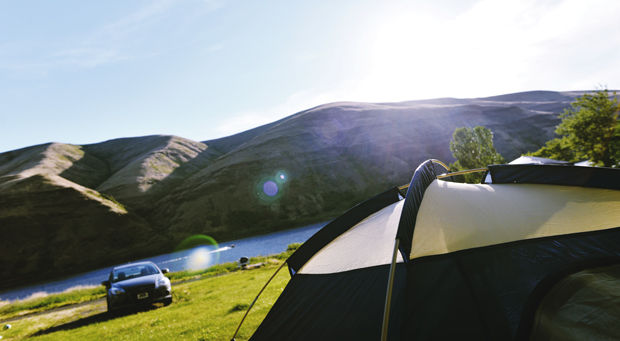 A campsite along the Snake River in Boyer Park, near where Weston crashed his aircraft this morning.

The Port of Whitman County is planning on expanding their park services in the near future.

Boyer Park, located alongside the Lewis and Clark trail by the Snake River, will benefit from the improvements.

“There will be fourteen full service RV campsites added to the park,” said Joe Poire, executive director of the Port of Whitman County.

The park currently contains around 18 full service hookups.  The additional sights will create an influx of people during the summer holidays.

“We start taking reservations in January and the summer holiday spaces go very quickly,” said Debbie Snell, Port of Whitman County’s properties and development manager. “And we are typically full for the year by mid-January.”

Not only is the park adding RV campsites, but the plans are to add cabins to the property as well.

“We are adding around three or four cabins to the expansion,” Snell said. “We are hoping it will help relieve the demand, especially for the holiday season.”

The cabins will be located near the south end of the park and will contain heating and cooling systems for those who wish to stay in the summer or winter.

“Because more spaces will be available and folks have access to cabins, I think the renovation is going to be amazing,” said Leo Haas, the Boyer Park Host “I think people will really enjoy their time here.”

Core documentation for this project will be submitted later in the week and will see finalization within the next six months.

“Hopefully the expansion will be underway the winter of 2015 beginning of 2016,” Haas said. “We should be breaking ground around a year from now.”

The $200,000 project budget will go towards the building of cabins, creating new RV camping spaces, as well as the cost of electrical and plumbing for the full RV hookups.

“The park currently can hold up to 46 RV’s,” said Haas. “We have seven tent camping sites in the park as well.”

These features are accompanied by a large swimming area, a boat launch, marina, motel rooms, a restaurant, and small convenient store.

“Boyer Park has been around for a long time,” Snell said. “We have been planning this expansion for several years now and it’s finally coming together.”