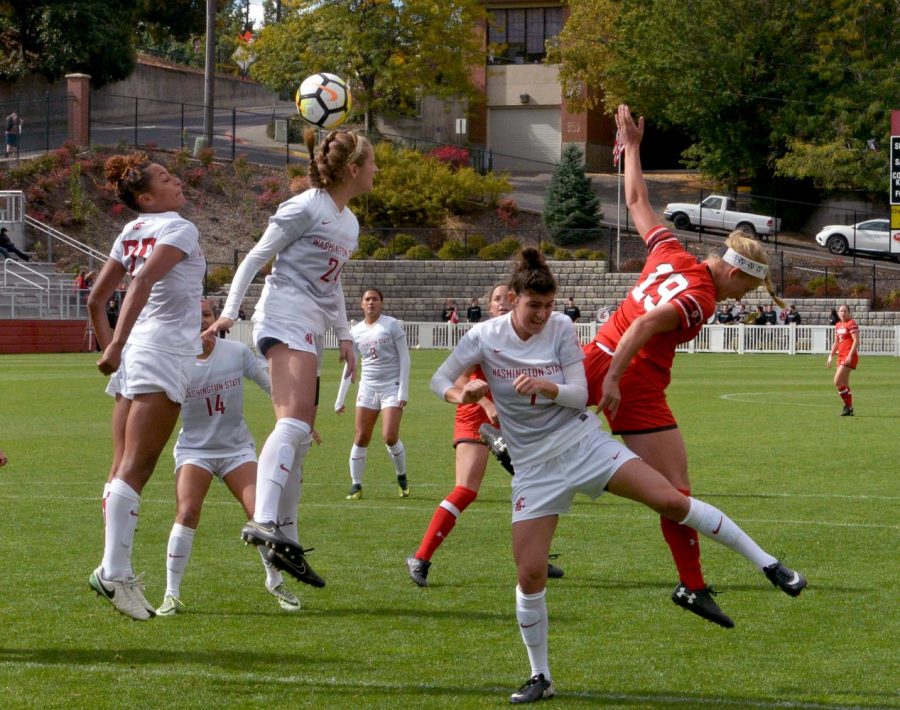 Junior midfielder Maegan O’Neill leaps for a header before an attempt on goal during a match against Utah on Oct. 1.

WSU ended its series of away games with losses against Oregon State and No. 18 California. The match against the Golden Bears was only the second time the Cougars have lost by a deficit of more than one goal.

The upcoming game will be the sixth time WSU soccer competes against a ranked opponent. The team is 2-2-1 against ranked schools this season.

While the Cougars have a losing record on the road this season, they have posted twice as many wins than losses at home. The Cougs have scored 14 goals while allowing just four at home so far.

“In this league, you’ve just got to minimize the other teams’ chances,” UCLA Head Coach Amanda Cromwell said after her team’s recent victory.

UCLA, the Cougars’ first opponent, is undefeated this season. The Bruins travel to Pullman having narrowly won by a score of 2-1 against Utah.

As a team, UCLA soccer has scored 38 goals in 14 matches. The Bruins’ offense will go up against the Cougars’ defense, which has allowed 12 goals in the same number of matches.

While playing at home, the Cougar defense has excelled at pressuring opponents into making mistakes, forcing turnovers and looking for scoring opportunities on counterattacking plays.

WSU hopes to add to its above-average home record against a productive UCLA side before hosting USC on Sunday.

The Trojans will play a conference game against University of Washington before visiting Pullman. USC is undefeated in Pac-12 play, and like UCLA, the team has not struggled to find the back of the net.

Having scored 25 goals in the season thus far, they have not yet dropped a game while playing at home, including a victory over Colorado on Friday.

The games are not expected to be easy for the Cougs, as both UCLA and USC have proved to be an offensive scoring threat. After losing two consecutive games on the road, the Cougars’ homecoming can act as a confidence booster and could prove enough for a return to form.

The game against UCLA will be played at 7 p.m. Thursday on the Lower Soccer Field. It will be broadcasted on Pac-12 Networks.