Soccer taken down by No. 6 USC 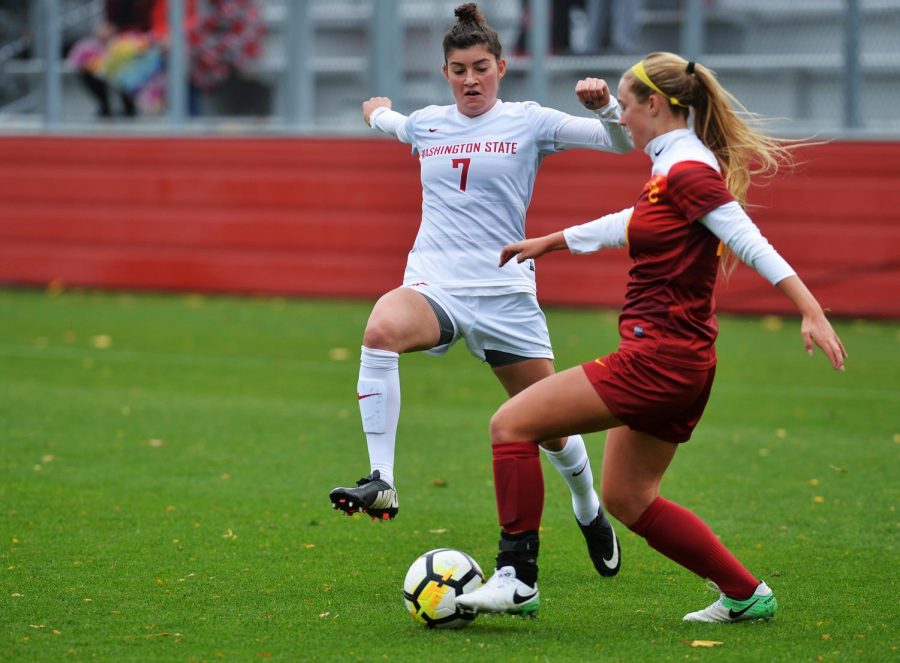 After defeating No. 2 University of California, Los Angeles in a tight 1-0 game Thursday night, WSU soccer (8-6-2, 3-5-0) hosted No. 6 University of Southern California (13-1-1, 7-0-1) for its last home game of the season. Despite having shutout UCLA, the Cougs were unable to repeat their defensive success against the defending national champions. The Trojans won 2-1 Sunday afternoon.

Coming into the match with high spirits, the Cougs were hoping to find another upset in their third consecutive game against a top-25 opponent. USC traveled to Pullman after a 2-0 win over University of Washington in Seattle.

WSU nearly fell victim to the visiting sides’ strong offense in the fourth minute, as a long ball was played over the top of the defense. USC redshirt senior forward Alex Anthony received the ball with only the goalkeeper to beat, and did so with a kick over WSU redshirt junior goalkeeper Ella Dederick’s head.

The chipped shot looked to be a sure goal, but WSU junior defender Grace Hancock sprinted back and was able to clear the ball off the goal line, allowing Dederick to sweep the ball into safety.

However, the Trojans struck in the eighth minute to open the scoring. USC forwards linked up on the edge of WSU’s penalty box, with Anthony setting up junior forward Leah Pruitt. Her left foot shot would beat Dederick to put USC on the scoreboard.

The Cougs put up stiff resistance and found opportunities of their own. They would get back into the game in the 27th minute to put pressure back on the visitors.

Finding sophomore forward Morgan Weaver’s feet during a counterattack, the Cougs moved up and broke through USC’s midfield. Weaver beat a defender off the dribble before feeding the ball to Elyse Bennett. The freshman forward received the ball on her right foot and dribbled into the box before letting loose a powerful shot past.

Bennett’s goal was the first of her WSU career, while the assist was Weaver’s first since the victory over UW on Nov. 3, 2016.

Until halftime, the draw seemed as if it was going to persist, but the Trojans managed to restore the lead four minutes before the break. USC sophomore midfielder Ashleigh Plumptre scored a goal in the 41st minute after being found in WSU’s penalty area by Pruitt.

Soon after the goal, the halftime whistle blew with the Cougs behind.

A USC cross was played into the Cougs’ 6-yard box and nearly found the back of the net before Hancock intervened. She cleared the ball off the goal line again.

Hancock almost tied the game for the Cougars with 10 minutes left to play. A corner kick taken by senior midfield Chelsea Harkins flew long and fell to Hancock, whose header would fly toward the net. But, the shot was blocked by a defender on the far post.

Despite several opportunities, the Cougs were unable to pull one back. The Trojans escaped Pullman with a slim 2-1 victory, and WSU’s home campaign ends with a 6-3-1 record.

Three games remain in the regular season for the Cougars, all of which will be contested on the road. The next match will be played at 7 p.m. Thursday against Arizona State (4-9-3, 1-5-2).