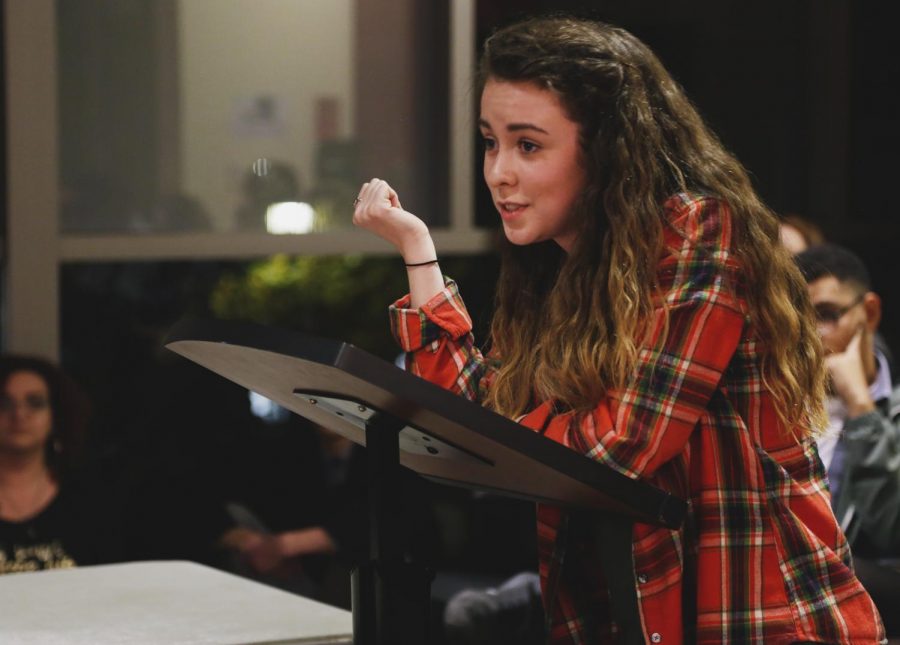 President of Stage, a Performing Arts club on campus, Aryn Allen voices her stance on preventing the discontinuation of the group at the ASWSU Senate meeting Wednesday.

Performing arts students vented their frustrations toward university leadership, and the budget cut that will soon end their program, during an ASWSU meeting Wednesday.

Their goal, Stage President Aryn Allen said, was to dissuade WSU President Kirk Schulz from cutting the funding that makes up the theater facility, their supporting faculty, at the end of the school year.

“The only two experienced people that are teaching us,” she said, “they are fired and we have nobody that can help us.”

She said she was concerned that once the program loses the last of its school support, it would end completely.

“Because they’re taking that away we don’t have a theater anymore,” Allen said. “How are we supposed to do theater without a stage, and that’s what we’re here to fight for.”

A member of Stage, Mystere Ryder, a junior strategic communication program, said the program helped her find her career path

“Theater helped me figure out what I wanted to do,” she said. “You kind of need acting skill to deal with people.”

Ryder said the theater’s budget was a very small part in the university’s overall deficit, which now rests at $30 million. In Schulz’s letter to campus, where he notified the public of cuts to both Multicultural Student Services and Performing Arts, he said that $1.6 million had been spent from reserves on the program since its inception in 2011, approximately $270,000 a year, which covers four adviser salaries and theater expenses.

“Our programs is not that big,” she said, “It wasn’t taking that much money from the university, it’s not fair that our little drop in the bucket is being taken away.”

Music student Clare Sullivan said she was disappointed that students weren’t consulted in the process, before their program was cut.

“Students are not strangers to sacrifice,” Sullivan said. “We weren’t asked what it is that we could’ve done to keep this program going.”

Sullivan said after this experience, she was not proud to be a Coug, and cutting arts is something she believes universities shouldn’t be doing.

“It saddens me because I thought that university was a place where, as well as researching and learning things about the world, students can pursue creative things,” she said.

Transfer student Nathan Porter, told the Senate that he had auditioned for a play earlier this semester, but hadn’t made the cut. Now that the program was losing its funding, he might not have another chance.

“I only have two years to experience theater before it’s all over,” he said, “before I become an adult.”

Allen said that even if the Stage group can’t change the university’s mind, they do not plan to stop advocating for performing arts.

“I don’t think any of us will ever stop fighting until something changes,” she said.