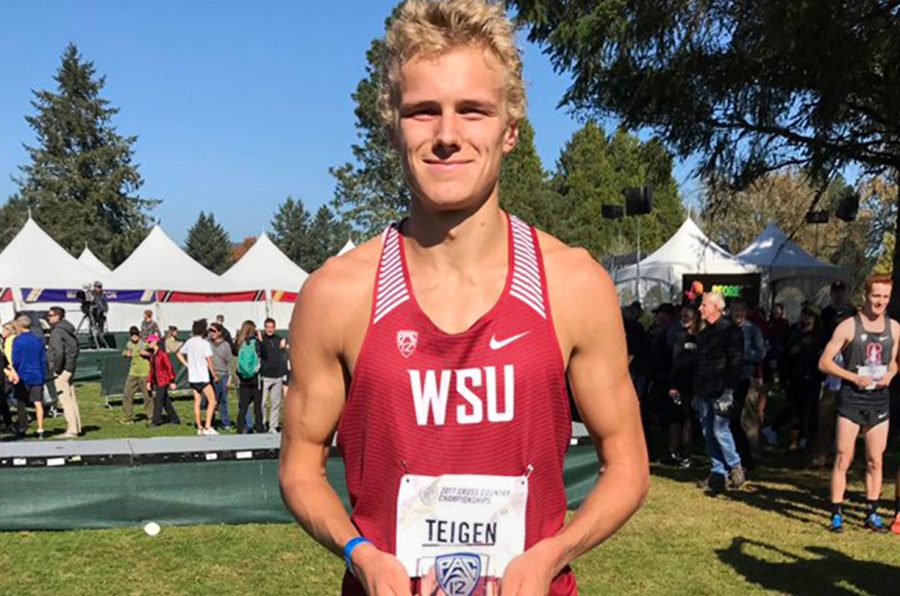 With an 11 a.m. start time at the championships, No. 5 University of Colorado, Boulder, and No. 6 Stanford were favorites to take top places in the race. The Trojans ended up upsetting Colorado, current holders and winners of the last six consecutive men’s titles, in this year’s race.

The Cougars placed sixth as a team overall, while Teigen and senior distance runner Michael Williams were among the top-25.

“Our guys ran very aggressively, and we just couldn’t hang on in the final 2,000 meters,” Head Coach Wayne Phipps said after the race.

WSU scored 138 points, just behind No. 20 University of Washington and No. 8 Oregon.

“I felt really good about how the race went today,” Teigen said. “Wayne [Phipps] said to shoot for top-10 and that’s what we were trying to do.”

Teigen finished with a time of 24 minutes, 2.3 seconds.

The WSU women’s team placed 10th, as No. 3 Colorado took its third straight women’s title. No. 1 Oregon finished second, while University of California, Los Angeles and Arizona State finished just in front of the Cougars.

Korir finished 13th overall with a time of 19:19.6. Phipps praised her performance.

“Vallery had another awesome performance and keeps getting better every week,” Phipps said.

“Our women took another step forward, but we need to continue to work on closing the gap between our top two and our three-four-five runners,” Phipps said.

The teams’ next competition is the NCAA West Regional Cross Country Championships. That race is 10,000 meters, as opposed to the Pac-12’s race of 8,000 meters. Phipps is hoping that the longer distance will prove favorable for his team. The races will be held at the Jefferson Park Golf Course, beginning at 10:30 a.m. in Seattle on Nov. 10.