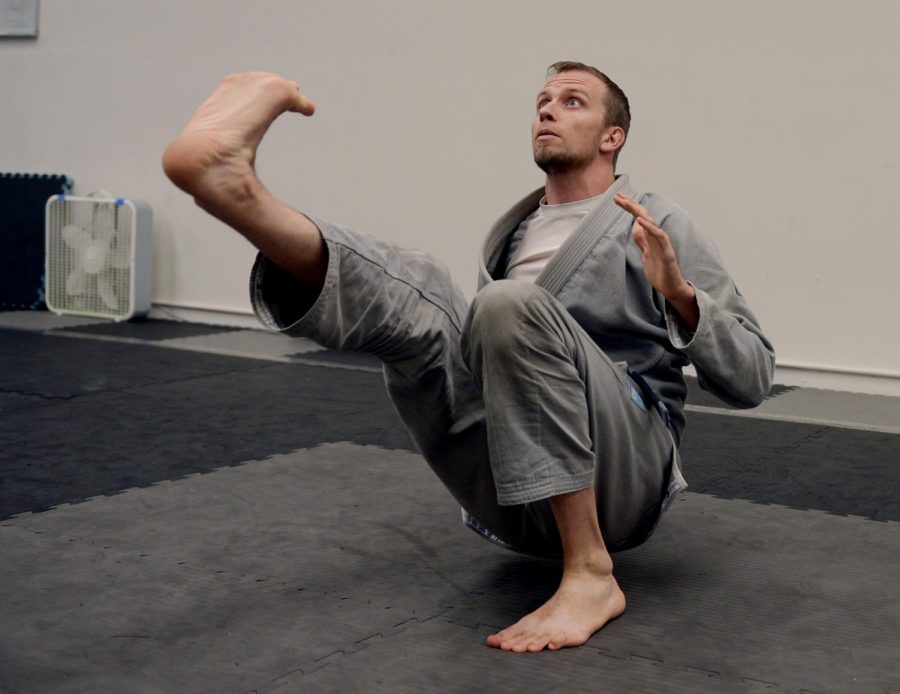 Shane McFarland, owner and jiu-jitsu teacher at Mantis Martial Arts, stretches before his class on Tuesday.

Shane McFarland, owner of Mantis Martial Arts LLC and president of the Brazilian Jiu-Jitsu Club on campus, said he is doing what he loves by being a husband and father, owning a martial arts academy and pursuing a doctorate in prevention science.

McFarland started jiu-jitsu in 2005 after quitting video games completely. He decided they were having a negative impact on his life and that he needed a change.

“It’s my meditation,” McFarland said. “When I’m on the mat all my stress goes away.”

The idea to try jiu-jitsu came from a flyer at the recreation center at Montana State University. He fell in love with the sport and started teaching two years later, he said.

McFarland was born and raised in Great Falls, Montana, and graduated from Montana State University in 2009 with a bachelor’s degree in human development.

“I enjoy seeing the smaller, weaker individual be able to use technique to overcome the larger stronger individual,” McFarland said.

Both McFarland and Jacob Stocklass, the Brazilian jiu-jitsu vice president, are working on expanding the club. Stocklass is a junior studying computer science and has been learning jiu-jitsu under McFarland for eight months.

Stocklass said McFarland is a great teacher and doesn’t mind taking the extra time to help his students succeed individually.

McFarland met his wife, Carol McFarland, in 2005 and said she was the reason he joined the Peace Corps in 2011. For two years, McFarland said, he developed business and economic plans in the Kingdom of Lesotho in South Africa, and educated people there about HIV.

His secondary assignment was to provide a jiu-jitsu training program.

Using an activity like jiu-jitsu and incorporating a way to raise HIV awareness into the curriculum is a good way to get young people to care, McFarland said.

While in the Peace Corps, he helped develop a martial arts association with the purpose of unifying the instructors and creating a conversation around HIV, he said.

In 2013 he returned from the Peace Corps and moved to Pullman because his wife was working toward her master’s degree in soil science. McFarland worked for the recreation center and was an organizer before enrolling in graduate school in the fall of 2016.

He also bought the space needed for Mantis Training Academy around the same time he enrolled in school to allow him to keep practicing and teaching jiu-jitsu, McFarland said.

Mantis Martial Arts LLC is located in downtown Pullman and the prices and schedule can be found on its website.