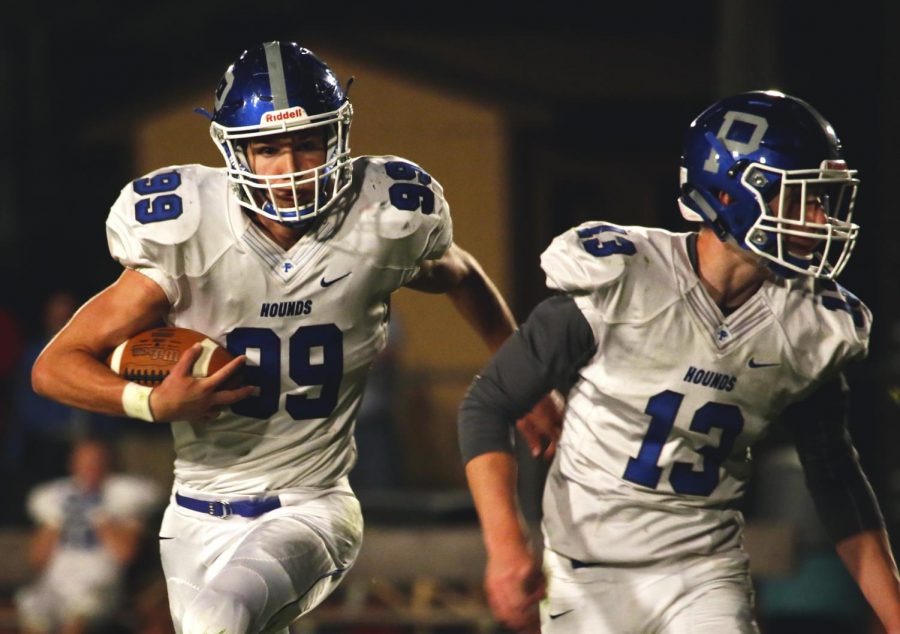 Senior tight end Jared Holstad, left, carries the ball while senior running back Kaden Hildenbrand prepares to block defenders in a game against Moscow on Sept. 15.

For the second year in a row, Pullman High School football (5-3) will play Prosser High School (7-2) in a win-or-go-home playoff game Friday in Grandview.

Nearly a year after defeating Prosser 14-13 in the first-round of the state playoffs, the Greyhounds again face the Mustangs, this time in a Great Northern League-Central Washington Athletic Conference crossover game. Whichever team wins earns a spot in the state playoffs.

Pullman first-year Head Coach David Cofer said Friday’s game will be tough, noting Prosser is consistently one of the best 2A teams in the state. But, he said the Greyhounds treat every week the same, and his players are ready for the pressure.

“I really like how mentally tough we have been this year,” Cofer said. “When I think about all of the adversity we have faced and how our kids have responded, I am really proud of what we have been able to accomplish up to this point.”

Prosser defeated Ephrata High School on Saturday by a score of 41-14, and securing a second-place finish in its division standings. The Mustang starters did not allow a point during the contest, with Ephrata unable to get on the board until late in the game.

Prosser Head Coach Corey Ingvalson said deception plays a role in what his team tries to do defensively.

“I just think our stack and the way that we move and the way that we shift just causes a lot of problems for some teams, and they don’t always know where we’re coming from,” he said, according to the Yakima Herald. “Our guys are kind of physical, kind of sneaky physical.”

When the teams met last season, the Mustangs were the defending 2A state champions. The Greyhounds were eliminated one week after they beat Prosser.

This week’s game is scheduled for 7 p.m. Friday night at Grandview High School.