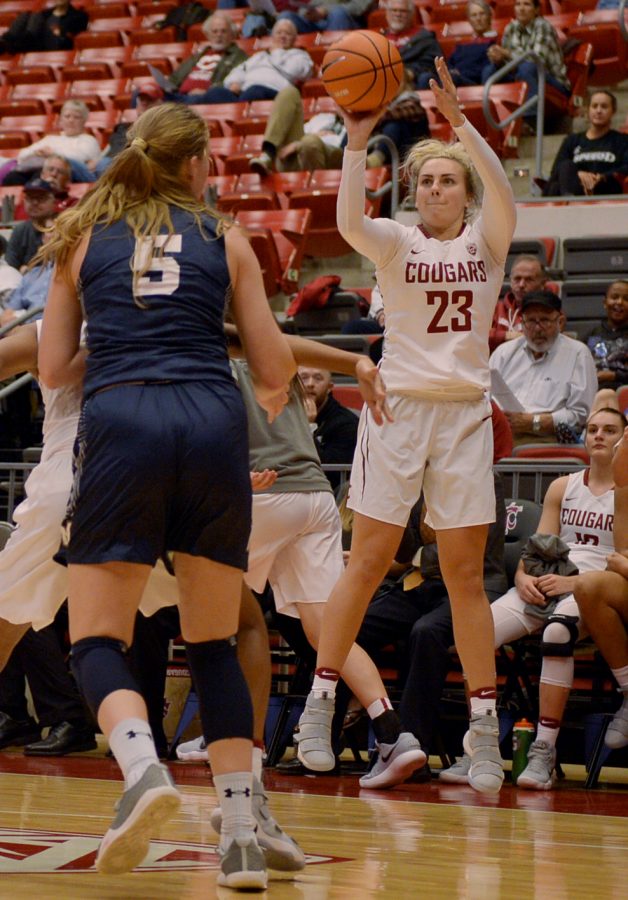 Alexys Swedlund has tried to excel in pretty much every aspect of her life, due in large part to her determination in whatever she pursues.

Swedlund enters this upcoming season as one of the more experienced players on the WSU women’s basketball team. As a sophomore last year, she set the program record for most three-pointers in a single season with 75. Opposing teams now know what to expect from the athlete.

Growing up in the plains of South Dakota, Swedlund said she learned how to make her own fun with her younger sister Natasha by exploring the outdoors. She also credits her parents for instilling core values that will never leave her.

“They’re my role models, they built me to be the person I am today,” Swedlund said. “They’ve always had my back to this day.”

South Dakota is an underrated area for basketball, Swedlund said. She first picked up a basketball about first grade. During her high school days, Swedlund’s accolades at St. Thomas More High School were too numerous to count.

She was a three-sport athlete in basketball, track and field and cross country, lettering multiple times in each sport. Other accomplishments included a 116-8 record as a member of the basketball team and being nominated for the McDonald’s All-American award.

Achievements on the court in high school weren’t as important to Swedlund, though. She maintained a 3.78 GPA, was a three-year member of the National Honor Society, was the student body vice president and made honor roll every year.

“I’m a big believer in excelling on the court and off the court,” she said. “It’s a huge reflection of who you are as a person. I want to be involved as much as I can.”

In seventh or eighth grade, Swedlund said the future started to become more transparent for her, who began working out with college athletes and coaches.

Upon choosing her destination for college basketball, Swedlund said the most important factor was playing in the Pac-12. As a freshman, she played in all 30 games, which gave her plenty of experience for the breakout she had during her sophomore season.

Toward the end of last season, Swedlund stepped up her play, helping lead the Cougars to the Women’s National Invitational Tournament semifinals. She had 20 or more points in each of WSU’s final three games, and was named to the 2017 WNIT All-Tournament team.

“We made history and had a lot of fun doing it,” Swedlund said. “Having experience opened my eyes to what I can do.”

“The determination and motivation is definitely there,” she said. “We want to play our hearts out each and every game.”

Swedlund plans to return for her senior season at WSU and would love to play professionally if given the opportunity. As far as personal goals for the season, Swedlund is looking for consistency from herself.

“I played my best ball in the second-half of the season and I want to play like that for the rest of my college career.”