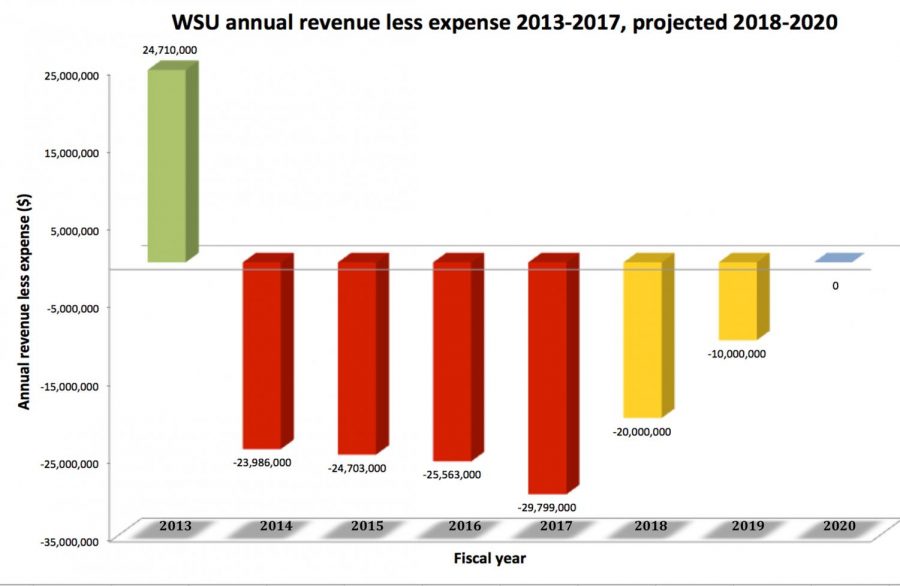 WSU overspent its budget by $20-$30 million annually from 2014-2017, depleting reserves by about $100 million. The university plans to cut spending by $10 million annually for the next three years, eliminating the deficit in 2020.

WSU colleges and other units are finalizing plans to cut spending by 2.5 percent in the current fiscal year, as required by President Kirk Schulz’s plan to eliminate the university’s deficit within three years.

WSU has overspent its budget by $20-$30 million annually since 2014, and has supplemented this deficit with reserve funds. This has depleted reserves by $100 million, and after another three years of similar spending, WSU would have run out of reserve money. The university is now looking for ways to curtail costs across the board.

“The decisions we make can, and in some cases, will, substantially change the lives of our students, our faculty, and our staff,” Schulz wrote in a recent memo.

His plan is to reduce deficit spending to $20 million this year, $10 million the next and to balance the university’s budget by fiscal year 2020.

Schulz announced last week that he would cut some programs and employees funded through reserves, such as the Performing Arts program and retention counselors in the Office of Multicultural Student Services. Amid outrage over the cuts, he has since decided to keep two retention counselors.

Because most university spending goes toward salaries, Schulz announced over the summer that WSU would leave vacant positions unfilled and cease creating all but the most critical positions.

“Cutting the budget is not something we take lightly,” Schulz wrote in the memo. “In fact, it’s agonizing for our entire community.”

Over the next three years, all WSU colleges and units will look to cut from various aspects of their operations. The Daily Evergreen obtained memos from several college deans to faculty and staff, outlining their plans to meet spending requirements.

The College of Arts and Sciences, WSU’s largest college, will reduce its spending by $1.2 million in fiscal year 2018, according to Dean Daryll DeWald’s memo.

The college will decrease expenditures over the next three years in three ways, DeWald wrote. One of these is through “strategic enrollment management” measures, like eliminating or revising courses with low enrollment and planning courses to avoid scheduling problems.

“We have to be extremely efficient in how we teach our courses,” said Larry Hufford, associate dean of faculty and academic affairs, in an interview.

The college will also reduce hiring, according to the memo, and Hufford said it has been doing so for several years. He said CAS has 18 fewer tenure-track faculty than it did in 2013, and the college will continue to leave positions unfilled as faculty leave the university.

Lastly, CAS will provide less financial support to centers and programs across the university that support “research excellence” and undergraduate success in mathematics and pre-professional programs, according to the memo.

Hufford said the college plans to raise its revenue by increasing enrollment in general, as well as in its summer and winter sessions, and adding new online programs. As the largest college, Huffard said CAS is responsible for about half of WSU’s tuition money, and therefore it will play a large role in improving the university’s overall budget.

“Tuition drives the university,” he said, “and the College of Arts and Sciences drives tuition dollars.”

The College of Agricultural, Human and Natural Resource Sciences will reduce its spending by about $920,000 this fiscal year, according to Dean Ron Mittelhammer’s memo.

He listed 10 budget management steps the college has taken or will take, including offering retirement incentives to 25 CAHNRS faculty. Mittelhammer wrote that this should eventually save the college $2 million annually, assuming they do not hire any new faculty.

CAHNRS will curtail financial support to various WSU centers, programs and initiatives, Mittelhammer wrote, such as the Washington State Water Research Center and the Center for Environmental Research, Education and Outreach.

Other budget management steps include potentially selling land at the Puyallup and Wenatchee Research and Extension Centers, and potentially leasing acreage at the Prosser Research and Extension Center; establishing end-dates for all college-funded commitments; using grant accruals to eliminate negative account balances; and only considering out-of-cycle salary raises to retain faculty who have been offered employment elsewhere.

Mittelhammer wrote that the college assigned spending reductions to each of its departments and schools in 2017, and that this cut spending by $3.5 million. The college has also reduced a number of positions in some of its support units, he wrote.

“By working together to expend funds conservatively and to seek additional revenue sources,” he wrote, “we can both address CAHNRS’ contribution to the university’s budget challenge, and support the overall future financial health of WSU.”

The Voiland College of Engineering and Architecture earlier this month notified many teaching and research assistants that their monthly stipends would be reduced by about a sixth.

GPSA Vice President Amir Gilmore has said the stipend reductions will have a severe impact on graduate students, who were given little notice.

“A student doesn’t even have time to prepare,” Gilmore said. “Everyone was kind of hit in the face by this.”

GPSA President Shane Reynolds said the reductions will hit international students harder, and that some may have to quit.

Dean Mary Rezac wrote in a memo in early October that the college may reduce spending on travel, new initiatives and research to meet its spending requirements.

She wrote that the college may also see an increase in average class size and may adjust the number of clinical faculty and tenure-track faculty.

The College of Education will reduce its spending by about $270,000 in fiscal year 2018, according to Dean Mike Trevisan’s memo.

The college aims to meet this goal through increased revenue from UCORE enrollment, savings from retirement and faculty reassignments, suspension of searches for several faculty and staff positions, and reduction in program coordinator compensation.

The Edward R. Murrow College of Communication will cut back on travel and nonessential operations to meet its spending reduction requirements, according to Interim Dean Bruce Pinkleton’s memo.

He wrote that he hopes to protect all faculty and staff positions, and that the college should be able to. However, he said, they will not provide funding for unplanned salary increases or travel.