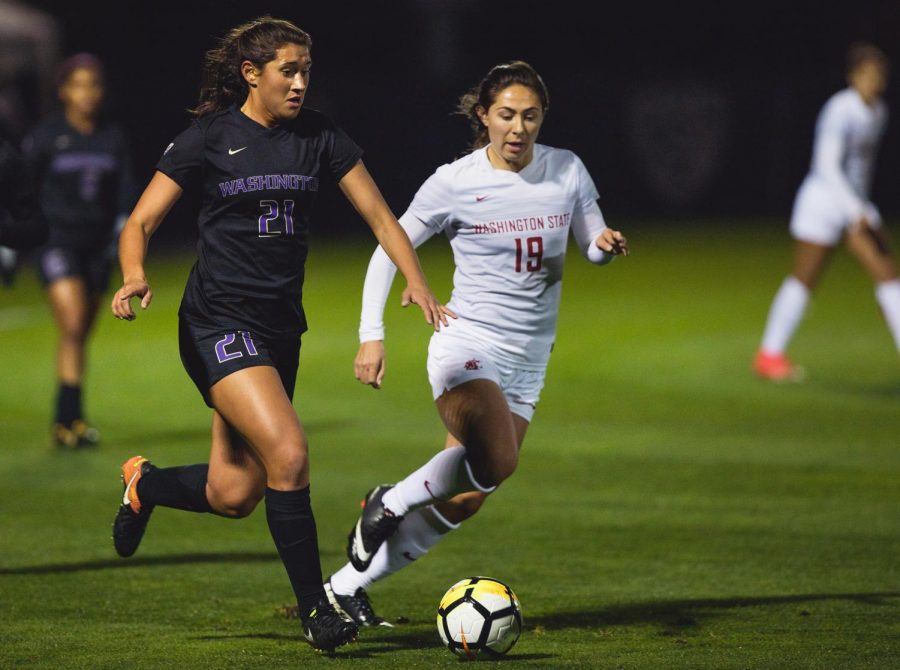 CONOR COURTNEY | The Daily of the University of Washington

A scoreless draw on a nearly-freezing night in Seattle rounded out the regular season for WSU soccer (9-7-3, 4-6-1). Neither the Cougs nor rival University of Washington (9-8-3, 2-6-3) scored in regulation, leaving the Apple Cup match to be decided in overtime.

The ensuing periods would play out to a stalemate, despite several chances from both sides to break the deadlock.

WSU traveled to Seattle in hopes of securing a postseason berth. Coming into the rivalry, the Cougars were just inside the bubble for playoff contention, and a win would have proved beneficial.

UW did not control possession of the ball as much as WSU to start the game, meaning the Huskies had to play defense early and often.

“It was more of a defensive battle than anything else,” UW Head Coach Lesle Gallimore said, according to UW Athletic Communications. “Our backline kept them in check, we defended very well.”

WSU had six times as many fouls as its opponent in the first 14 minutes, but the Huskies were not able to find the back of the net. The Cougars finished the match with 14 total fouls to UW’s 10.

In the 32nd minute, junior defender Grace Hancock and junior midfielder Maegan O’Neill attempted to break the even score. O’Neill had a shot blocked after finding the ball in the Huskies’ penalty box. The rebound was headed toward the goal by Hancock, but the shot sailed high.

The aerial attack continued minutes later as O’Neill again received a corner kick, this time by junior defender Maddy Haro. O’Neill connected with a header, but she did not direct it toward the goal.

UW eventually took chances of its own on offense. Both teams finished the game with nine shots.

The Cougars dictated play in the first half hour of the game, but struggled to score a goal against the Huskies.

As a result, the lack of attacking options would take the Apple Cup to overtime. The hosts, now fully settled into the contest, almost won the game at the start of overtime. UW junior midfielder Anissa Dadkhah found space in the middle of the field and dribbled to WSU’s penalty area.

She kicked from 20 yards out, but the ball sailed over goal. WSU redshirt junior goalkeeper Ella Dederick denied UW with her 10th shutout of the season. It also moved her into second place alone on the Cougars’ single-season shutout list.

On the other end of the field, there was a moment of controversy as Cougar freshman forward Elyse Bennett was seemingly fouled in the Huskies’ penalty box. In overtime, Bennett had beat a defender on the dribble and was dragged down from behind. While the Cougars hoped for a penalty kick, the referee did not call a foul.

Neither side scored in the allotted 110 minutes, and the match ended in a draw. UW came into the game having lost five straight while WSU had dropped four of its last six. The Cougars return to Pullman having avoided their first Apple Cup loss since 2003. The team’s overall record against UW is 13-7-7.