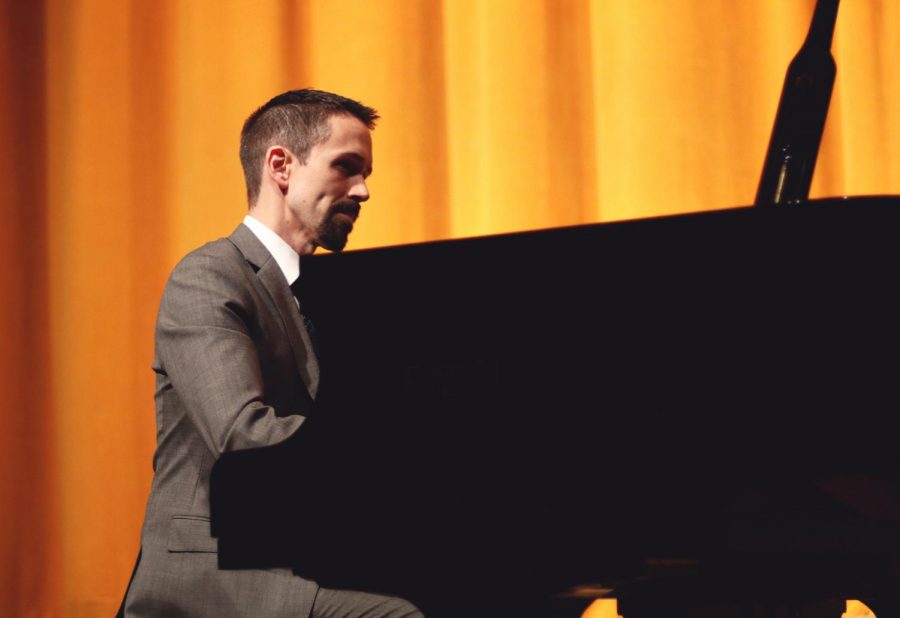 Michael Seregow’s debut piano recital at the WSU School of Music was a smashing hit. Earning and deserving of a standing ovation, he enticed the crowd with an encore of music after his set which awed the audience, myself included.

Seregow opened up the set playing two beautiful ballads by Gabriel Faure, “Nocturnes No. 6” and “Nocturnes No. 12.” He performed the two Faure pieces with an elegance that reflected a contemplative attitude. His playing style would go from docile and tranquil to rushed, with heightened excitement, through his use of dynamics within running passages of intricate notes.

From the two Nocturnes, he transferred into “Sonata No.28 in A Major, Op. 101” by Ludwig Van Beethoven. This was masterfully performed and his preparation of the piece surpassed being commendable.

Seregow’s showmanship was also terrific. His transitions between the different moods of the piece were as graceful and elegant as they were written to be.

Throughout the more intense pieces, like the Beethoven sonata and within Claude Debussy’s selections from “Estampes,” he would stare into the piano, harvesting every memory that the grand piano had in it, drawing out the true richness of the instrument.

Another piece of showmanship exerted by Seregow was he would move with the music, something completely ignored by many classical musicians. He seemed to melt into the piano during a long, smooth melody before pulling himself upright, bolting into the piano the extreme precision of his featherweight fingertips.

All of his performances were wonderful, but his fourth and what was intended to be his final selection of music, stuck out from the rest. He performed selections by Bela Bartok, and they were far from homogeneous with the rest of the music. The style was nothing like that of the Beethoven, Faure or Debussy charts, which were extremely refined and sounded like what many people consider to be classic music.

With Bartok, a relatively contemporary composer, everything was chaotic and flipped upside down, and the composition just tends to sound off. However, Seregow pulled it off and because of that, he earned a standing ovation from the entire crowd. He took his bows and left the stage, only to come back and resolve the chaos that was the Bartok selections with another piece by Faure.

Michael Seregow is a dynamic musician who has earned his place in the Faculty Artist Series, the proceeds of which go to support students attending the School of Music on scholarship. I look forward to next semester and having the opportunity to see him solo again.

Blaine Ross is a freshman music education major from Montesano. He can be contacted at mint@dailyevergreen.com.